RTD has just announced that they will not be moving forward with an unsolicited proposal to construct the North Metro Rail Line through north Denver, Commerce City, Northglenn, and Thornton. 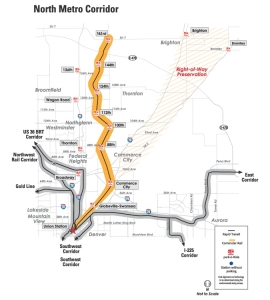 For those who don’t know, an unsolicited proposal is essentially what it sounds like – it’s a proposal to construct the corridor without a solicitation by RTD to do so. North Metro Constructors – made up of a partnership between Fluor, Balfour Beatty Rail, and Ames Construction (major players along the East and Gold Lines) – submitted a proposal on September 19. RTD moved forward with initial evaluation, but sadly, the proposal didn’t work given RTD’s budget constraints. The specifics of the proposal will not be made public.

What happens next with the North Metro Rail Line? RTD is moving forward on constructing the first $90 million segment of the corridor from Denver Union Station to the National Western Stock Show Complex, as I mentioned in a previous post. That work will  be complete by 2016.  Look for more information regarding that project later this year and early next year as RTD releases a Request for Qualifications (RFQ) in the coming months. For RTD’s official press release regarding today’s announcement, click here.