Bit of a good news/bad news situation to report. I’ll start with the bad (depending on your point-of-view).

As you may have heard, the RTD Board of Directors has decided against going after another FasTracks sales tax vote in 2011. However, the Board has stated their commitment to completing the entire FasTracks program as promised to voters in 2004. Given RTD’s estimated $2.5 billion revenue gap in the FasTracks program, another sales tax vote is needed to complete the system before 2042 (when RTD estimates currently show enough revenue to complete every component of the program). However, simply because the RTD Board decided against a 2011 vote, that doesn’t mean that they won’t consider another year.

The Board made their decision for a variety of reasons, but the economy and public support played the largest role in forming their decision. Simply put, the economy is still in rough shape in many respects and RTD polling showed that many people in the district would not support another tax right now. However, RTD polling also showed that people want FasTracks completed sooner rather than later. The RTD Board is going to explore a ballot initiative in 2012. In the coming months, RTD will determine if 2012 is the right time to ask the voters for more money to complete the project. Stay tuned!

But the (undeniably) good news! The RTD Board of Directors also approved the 2011 FasTracks Financial Plan recently. Embedded in the plan was $305 million in short-term funding for FasTracks projects not currently under construction or under contract. The $305 million comes from Denver Transit Partners’ bid to build the Eagle Project coming in far under RTD’s estimates. These seven projects kick-start work in corrdiors that have been relatively quiet until now. Some of these projects will kick off later this year and the others will follow suit soon thereafter. The projects include:

Finally, RTD has issued a new system map for FasTracks showing exactly which pieces are currently (or will very soon be) under construction and which will not be. 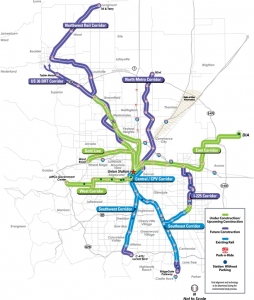 It’s just a tad different than the FasTracks maps we’ve all gotten used to. Even though it’s a tad disappointing to not see more under construction soon, there’s nothing wrong with three full rail corridors (West, East, and Gold), pieces of three others (Northwest Rail, North Metro, and I-225), and a BRT extension! Any piece we get is better than nothing!