As modern streetcars and urban bicycling both spread across America, cyclists and transit groups that are traditionally allies have sometimes found themselves at odds over the prospect of rail tracks embedded in city streets. Bicycle advocates are often worried that streetcar tracks will cause bike accidents, which can lead cyclists to oppose streetcars.

The two groups should not be enemies. On the contrary they are natural allies, because cities with large streetcar networks also tend to be the most bicycle friendly.

This is because streetcars contribute strongly to the development of more dense, urban, less car-dependent cities – the same characteristics that produce the most friendly urban bicycling environment.

Amsterdam is widely considered to be one of the bicycling capitals of the western world, and rightly so. Its mode share is a whopping 38%. That blows away America’s top biking city, Portland, which has a mode share of around 6%. Simply put, Amsterdam is a better city to bike in than any large city in America, by far.

And guess what: Amsterdam also has a huge streetcar network. There are currently 16 operating streetcar lines there, reaching all over the city. 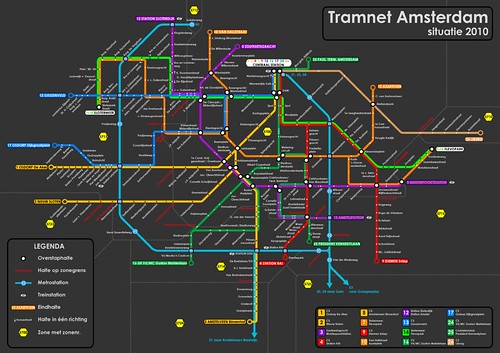 It’s also no coincidence that Portland is both America’s top cycling city and home to our country’s streetcar renaissance. The same city that most agree is the best urban cycling experience in the country is also home to the largest modern streetcar network.

To be sure, integrating bikes and streetcars takes a bit of extra planning. Amsterdam and Portland both have extensive bikeway networks so that mixing is less necessary. That extra planning is important, and regardless of bikes or streetcars it is needed to build the sort of sustainable city that Portland, Amsterdam, and Denver all aspire to be.

Nevertheless, the point is clear: Streetcars and bikes are not enemies. They work together all over the world. If Denver’s plans to introduce streetcars become reality, the two can work together here as well.