As you know from Ryan’s recent post, light rail service along RTD’s Central Platte Valley line has been suspended for three weeks (from July 23 to August 14, 2011) for two major reasons: 1.) to tie the existing tracks into the new light rail station at Denver Union Station next to the Millennium Bridge (which Rick is expertly covering at DenverInfill) and 2.) to tie RTD’s under-construction West line’s tracks into the existing CPV line. It is the West light rail integration and the resulting infrastructure reconfiguration that I’ll be focusing on here today.

The West light rail line, scheduled to open in 2013, will terminate at Union Station. To provide West line service to the three stations in the CPV south of Union Station (Auraria West, Mile High Stadium, and Pepsi Center/Elitch’s) requires merging the West line into the existing CPV line after the CPV line has split off from the Central line into Downtown but before the Auraria West station. With the original CPV track alignment and Auraria West station location, that became a very difficult geometry problem.

Here’s a GoogleEarth aerial (from May 2011) showing this area, along with annotations by me. The original Auraria West station is aligned east-west just south of the Auraria Administration Building. By moving the station about 500 feet to the west and rotating it into a north-south alignment, the geometry problem has been solved. In the aerial below, you can see the new station platforms and, to the south, the West line’s curved flyover above the main line freight tracks and the West line’s path northward into the new station (click to embiggen): 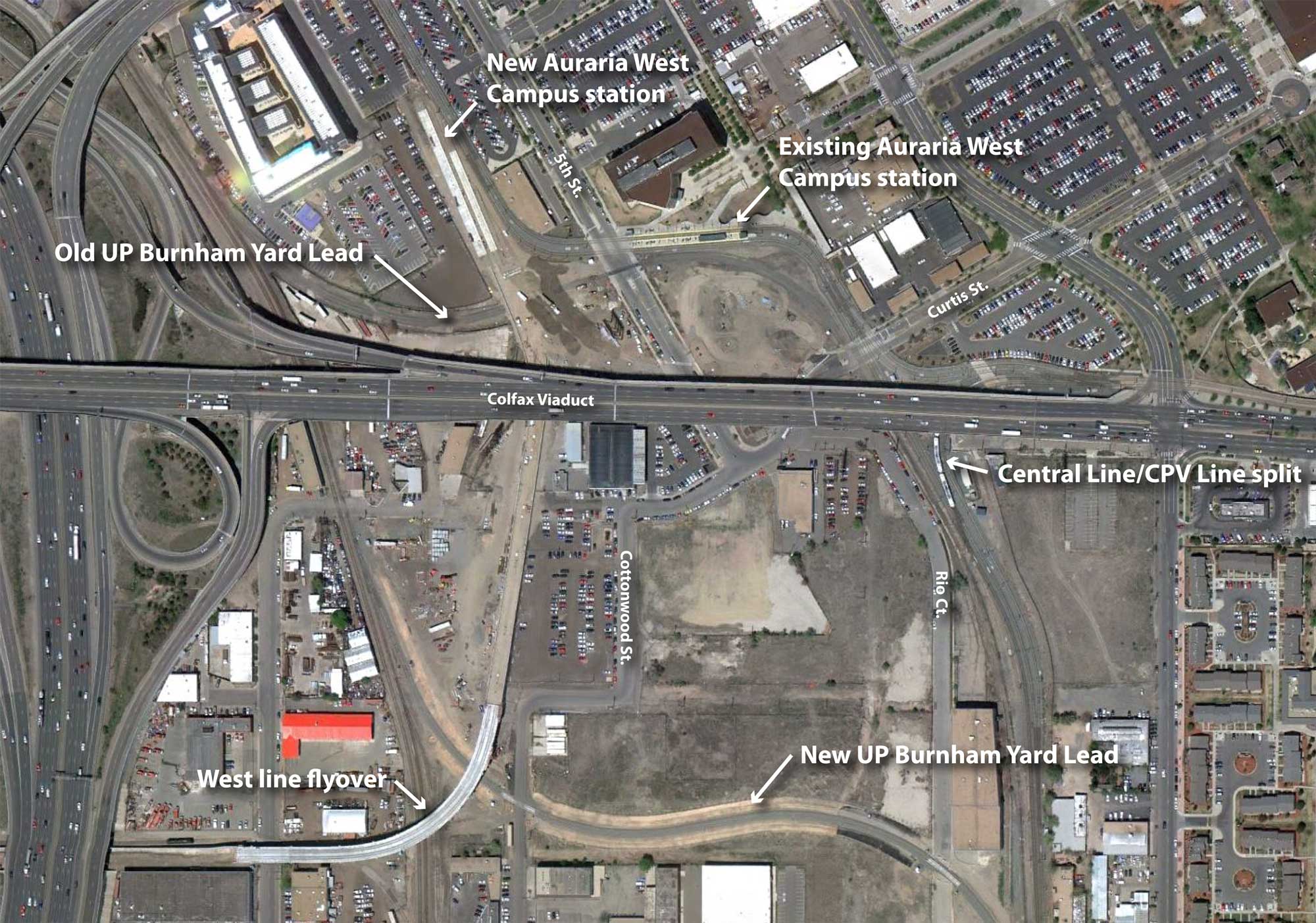 Additionally, Union Pacific’s “Burnham Yard Lead” tracks used to branch off from the main line freight tracks next to the Campus Village Apartments, cross 5th Street just south of the existing Auraria West station, and then cross Curtis Street just west of the existing light rail tracks before heading south to Union Pacific’s Burnham Yard near the 10th & Osage Station. To accommodate the new light rail alignment and to remove several railroad crossings, the Burnham Yard Lead tracks were relocated, branching off the main line farther south and running east-west through undeveloped land before turning south around 13th Avenue. Both the “scar” left from the old alignment as well as the new alignment are visible in the aerial.

Finally, as part of the reconfiguration of the whole area, the City had to realign Curtis Street and 5th Street, which had not yet started construction when this aerial was taken, but is now underway. Needless to say, this project required intense cooperation between RTD, the City, the state-owned Auraria Higher Education Center, Union Pacific Railroad, and various utility companies with easements and facilities in the area. The fact that this all managed to get worked out is a good example of intergovernmental cooperation.

Here’s an exhibit, prepared by RTD for a presentation to AHEC in December 2010, that does a good job of showing the “before and after” planned for the area: 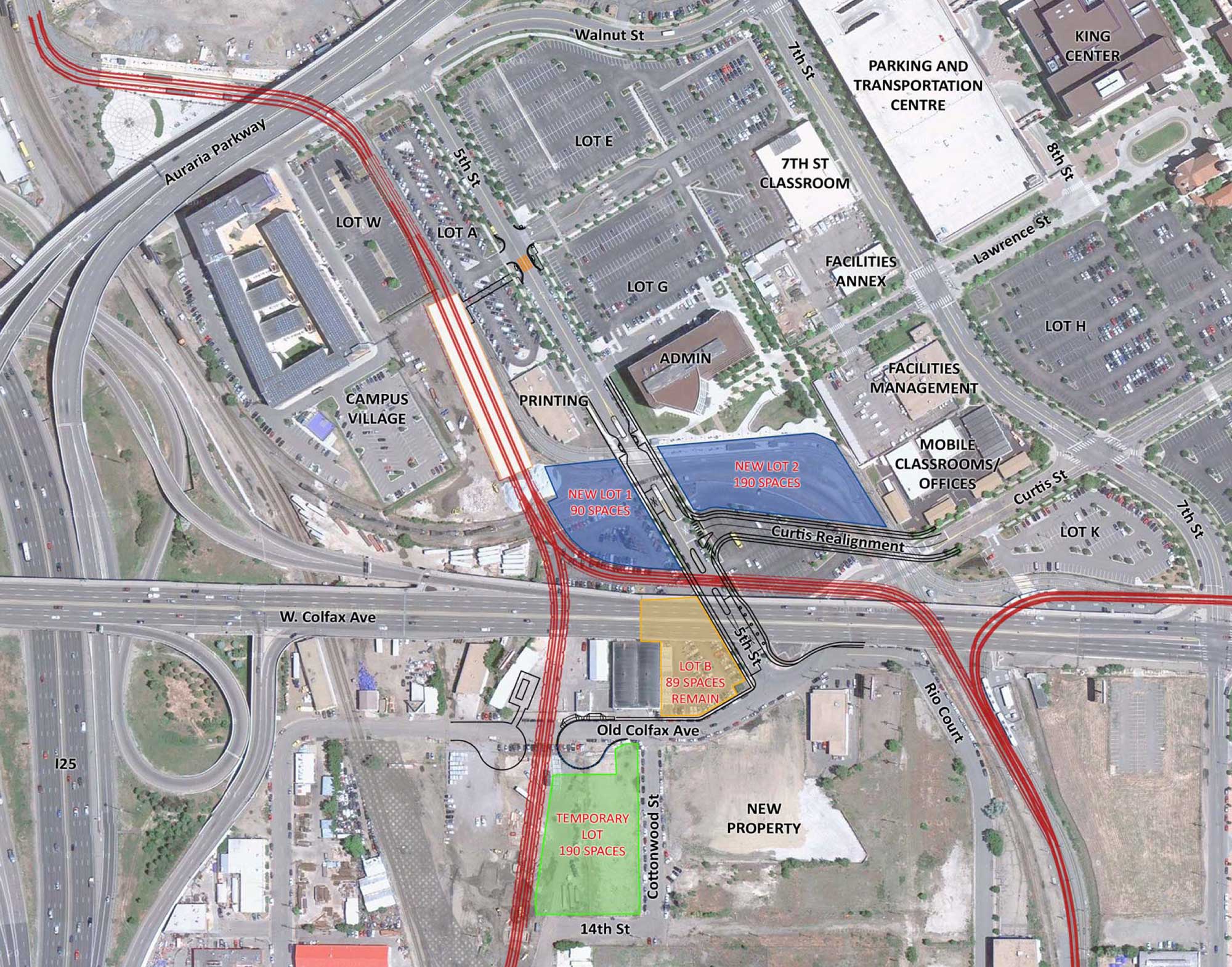 To wrap things up, here are some photos I took this weekend. 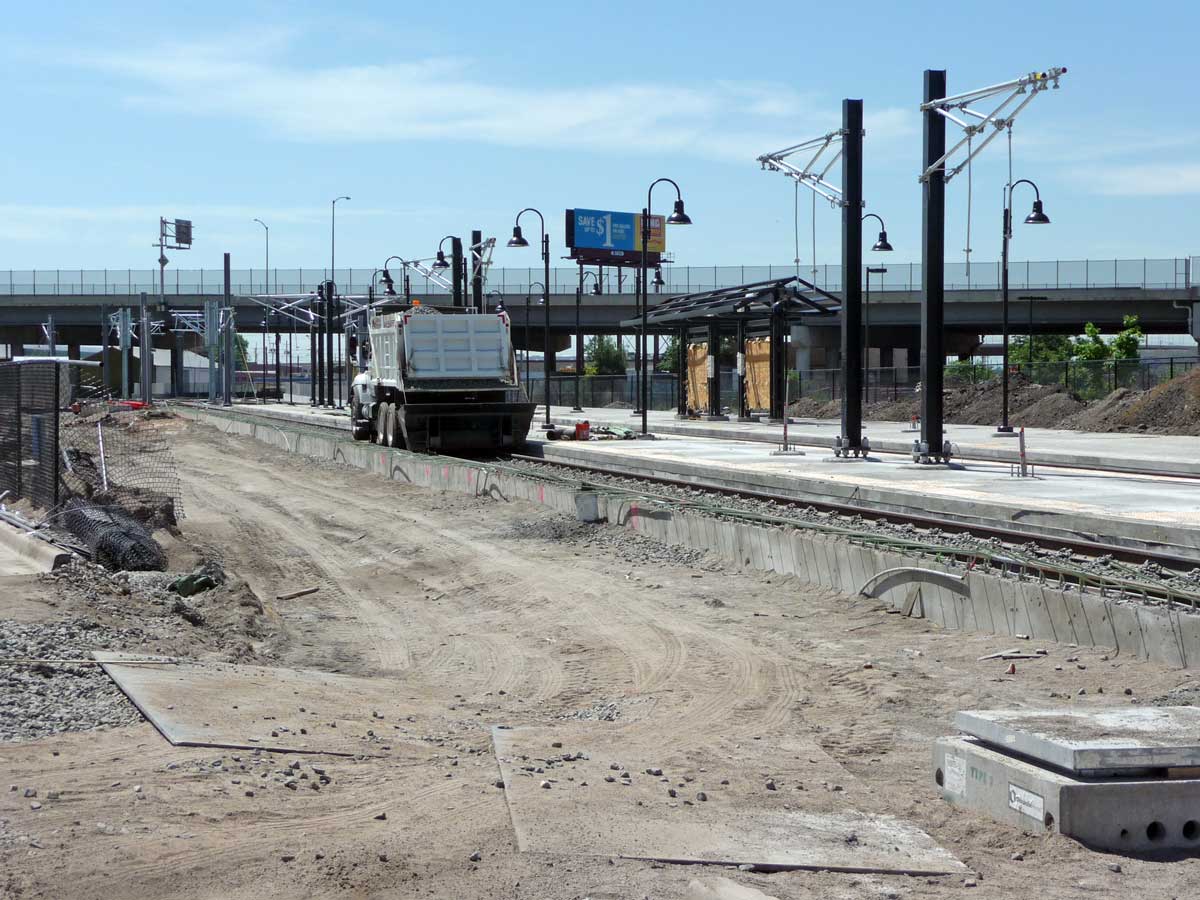 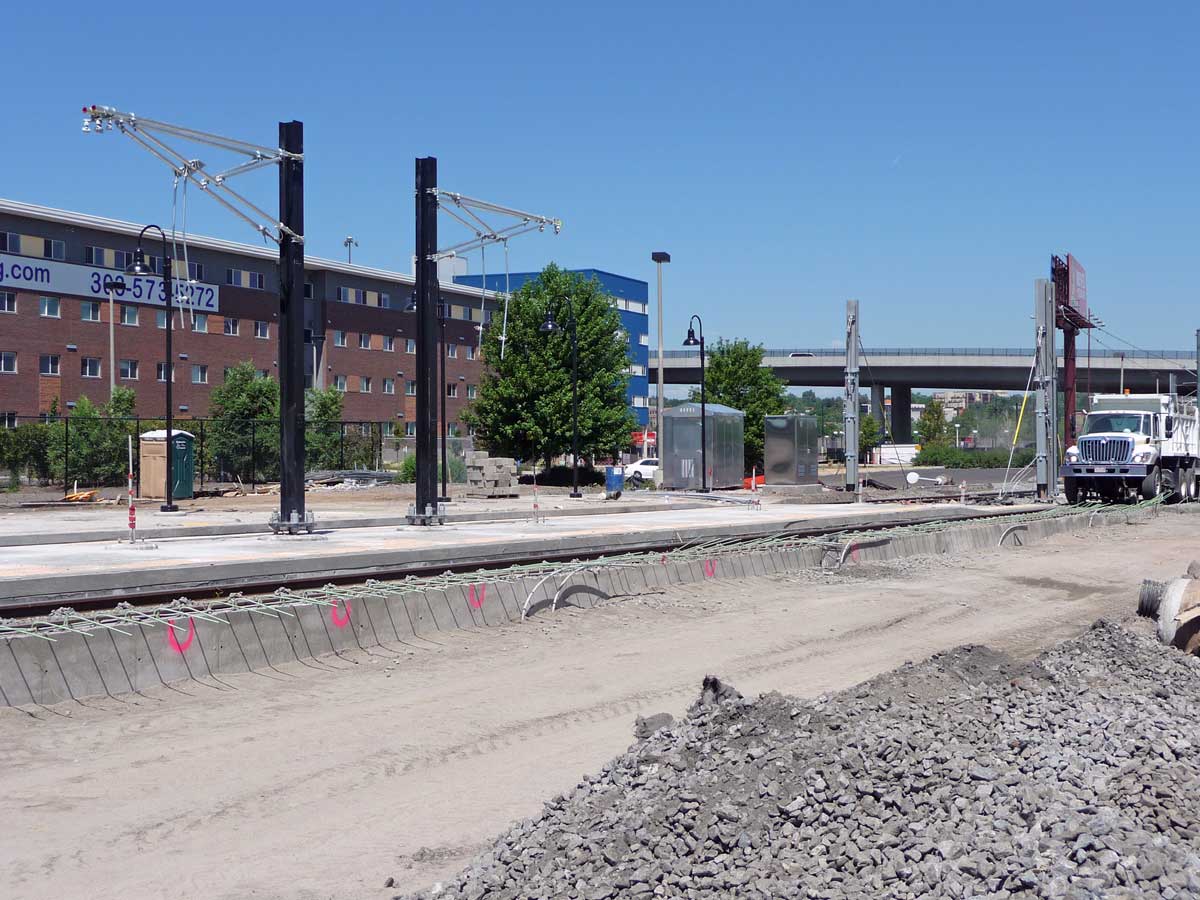 Left: Standing in the middle of 5th Street looking east at the original Auraria West Station
Right: From the same location looking west towards the new station 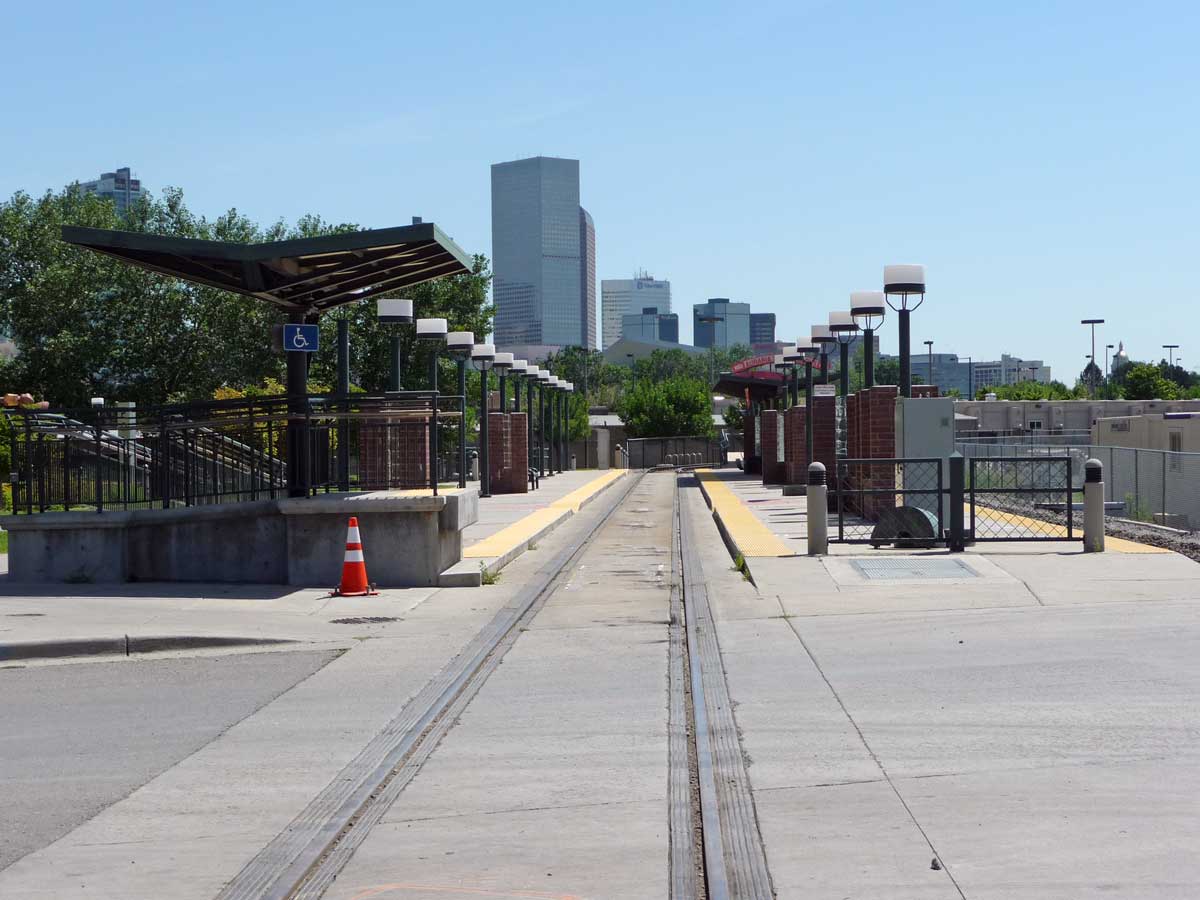 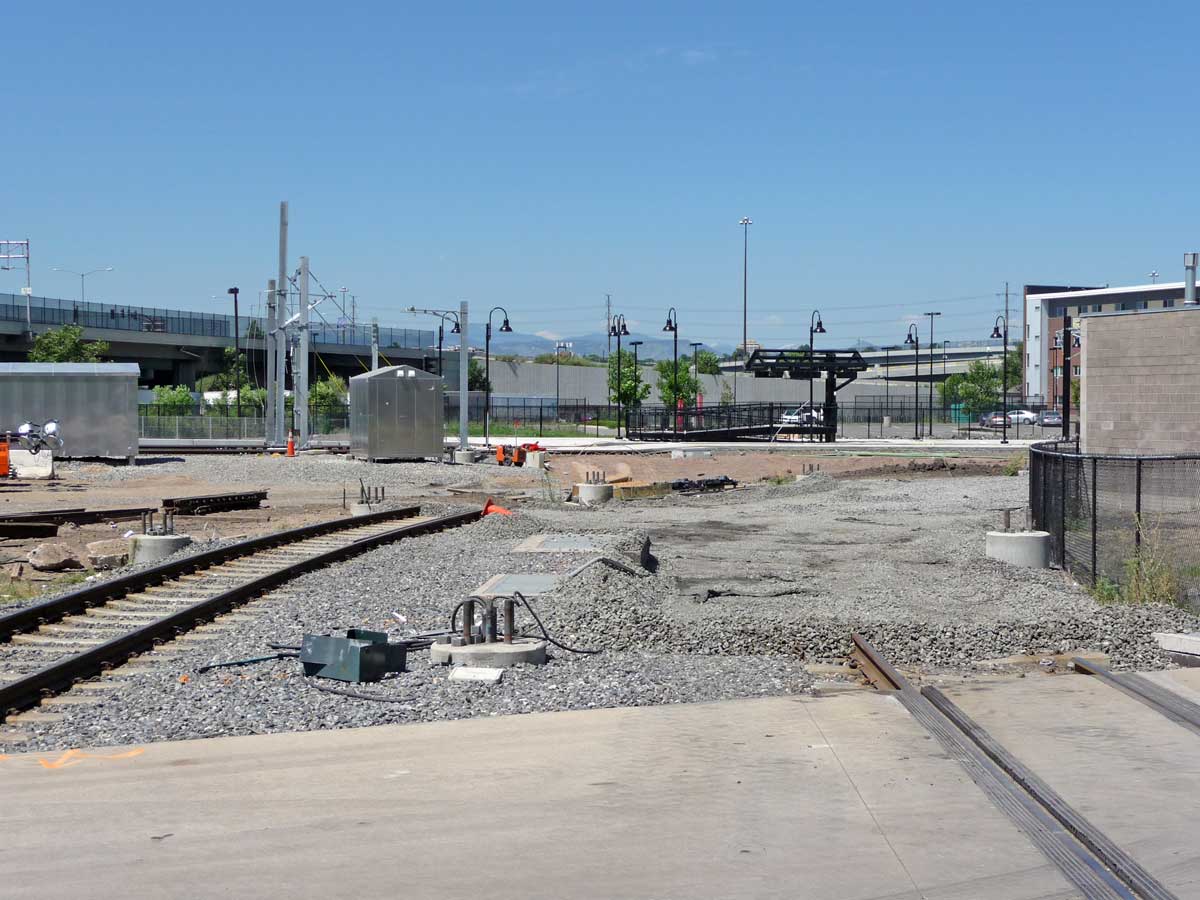 Left: From the new light rail crossing of 5th Street, looking east at the new tracks and their curve south under Colfax
Right: From the same location looking west towards the junction with the new West line 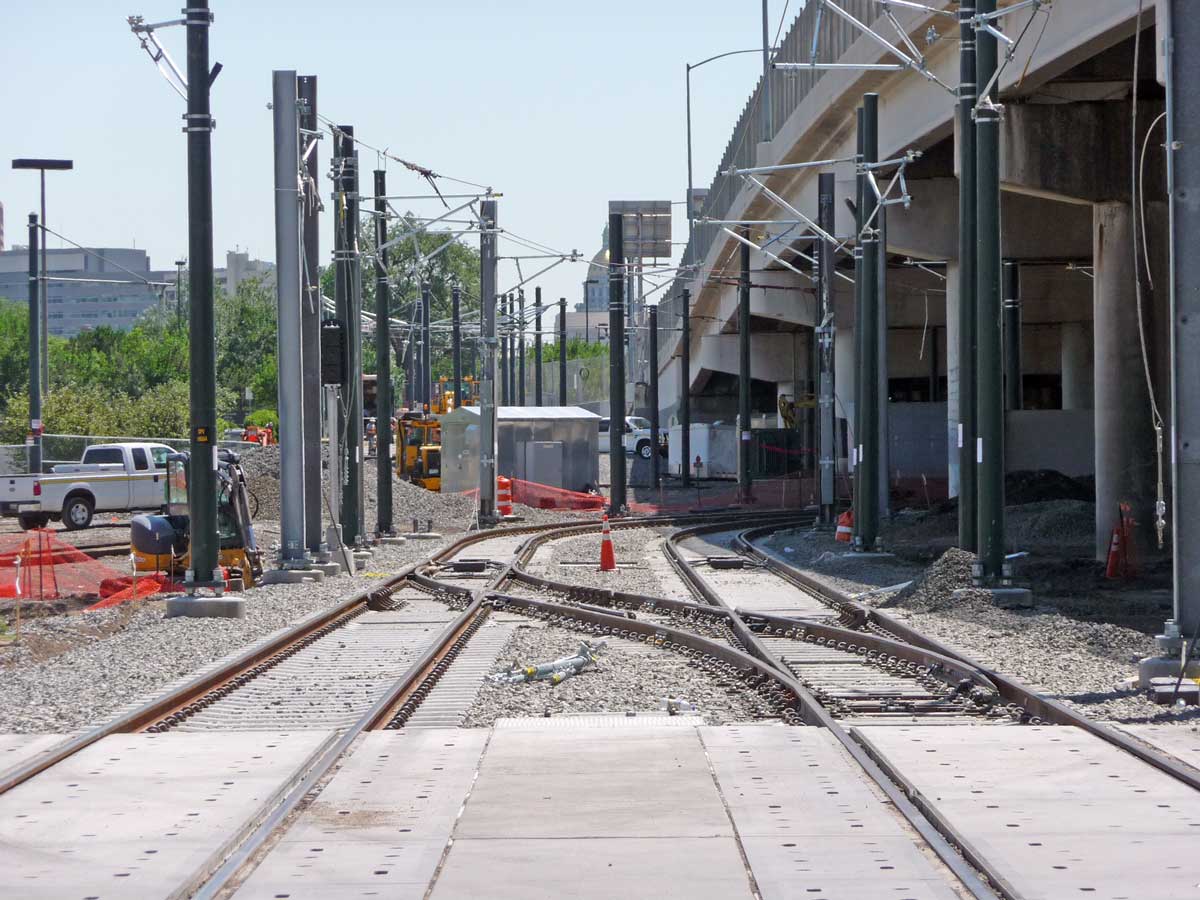 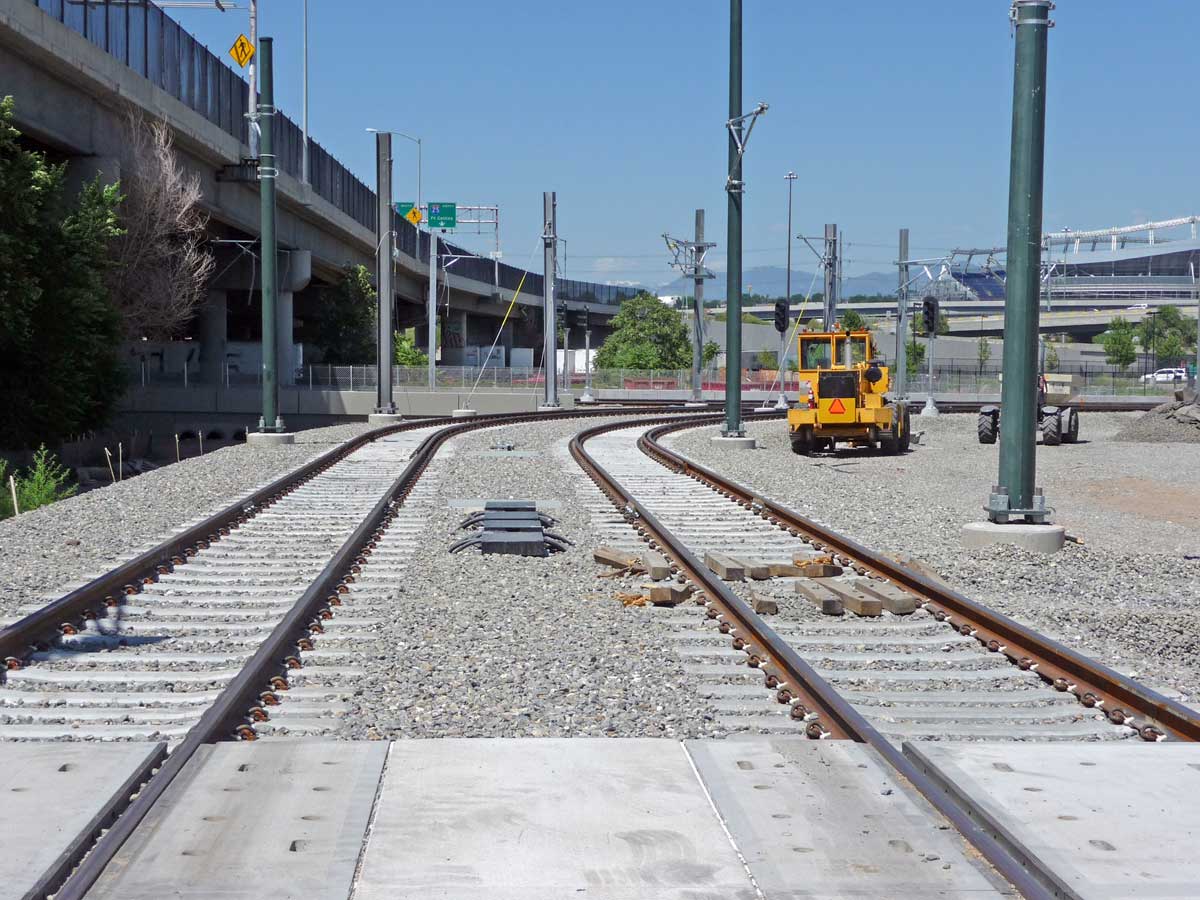 Left: Looking south along the original light rail tracks’ alignment and their crossing of Curtis Street, with workers farther south tying in the new tracks just north of the merge with the Central line
Right: The new West line flyover curve above the freight tracks taken from near Cottonwood Street 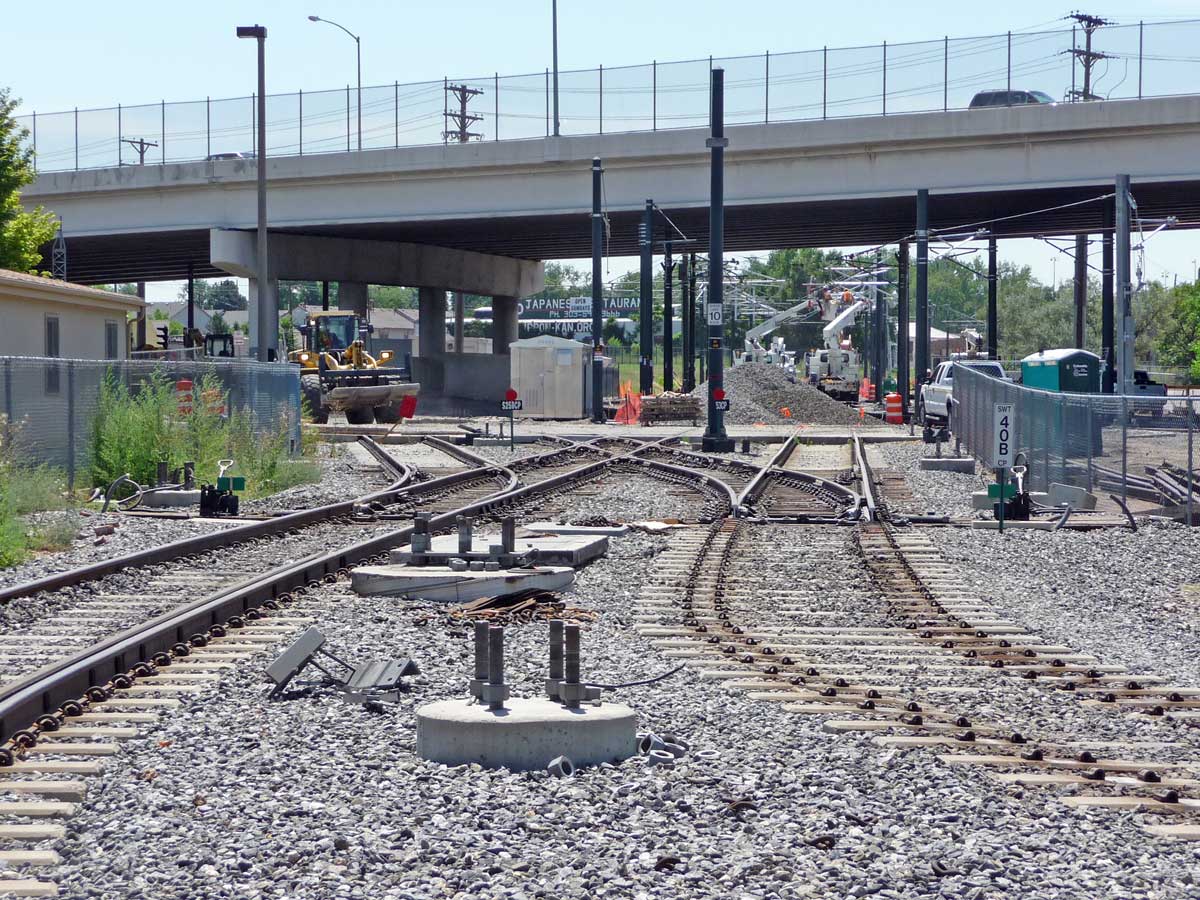 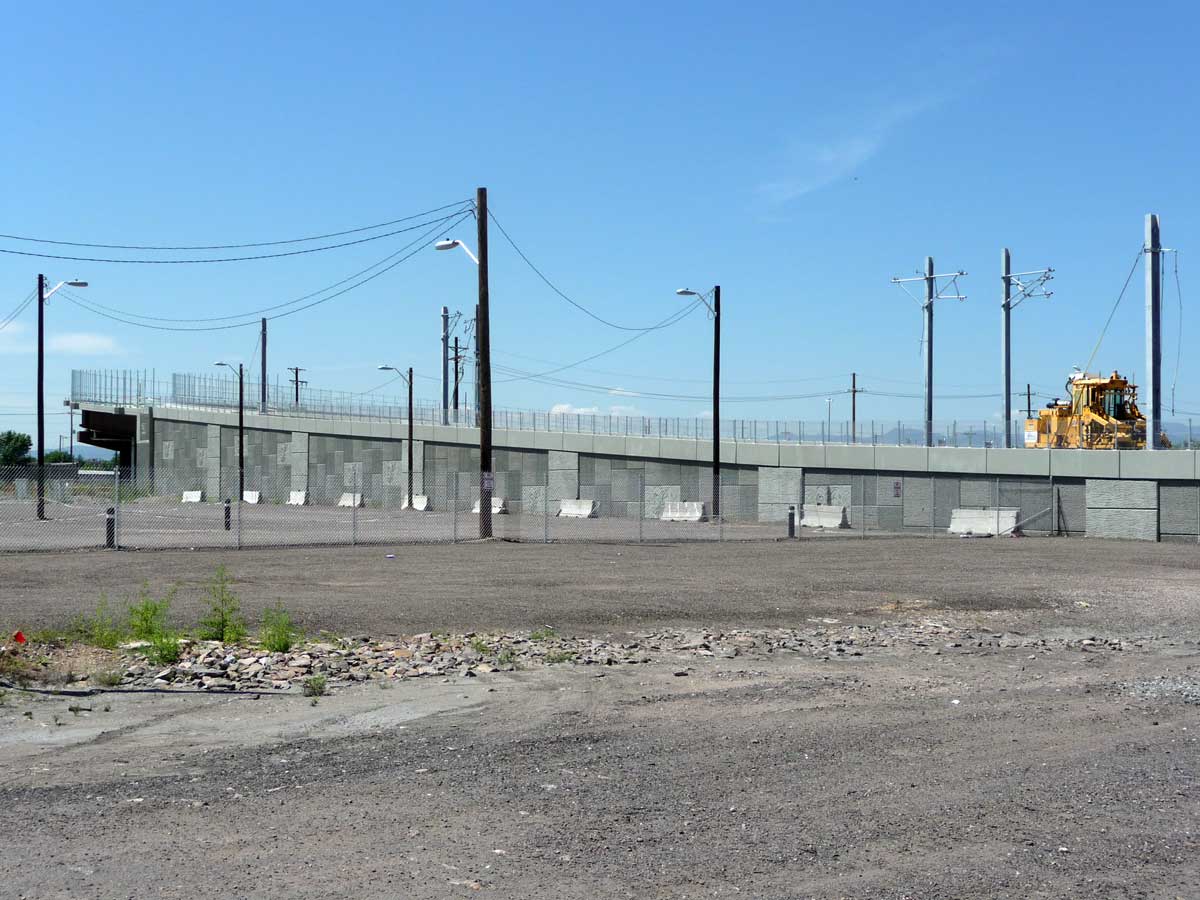 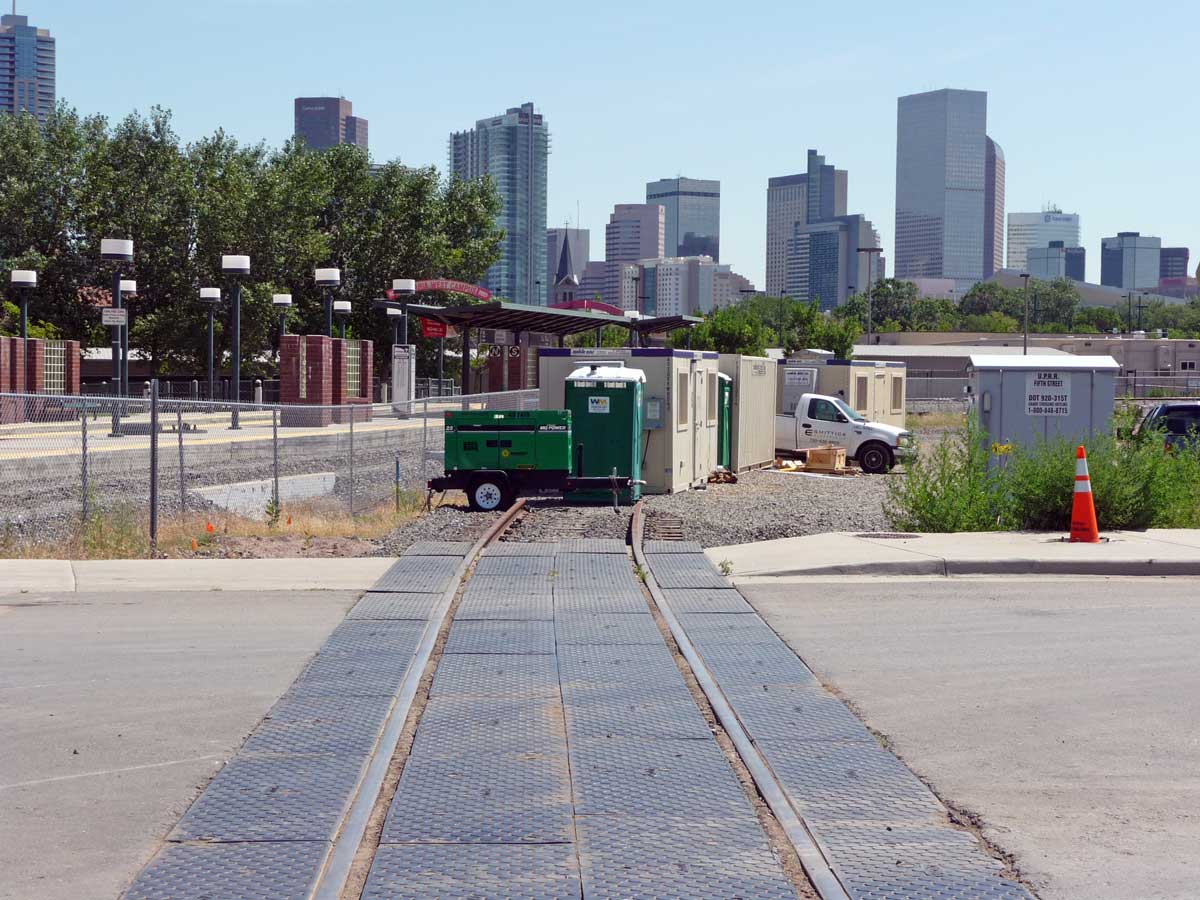 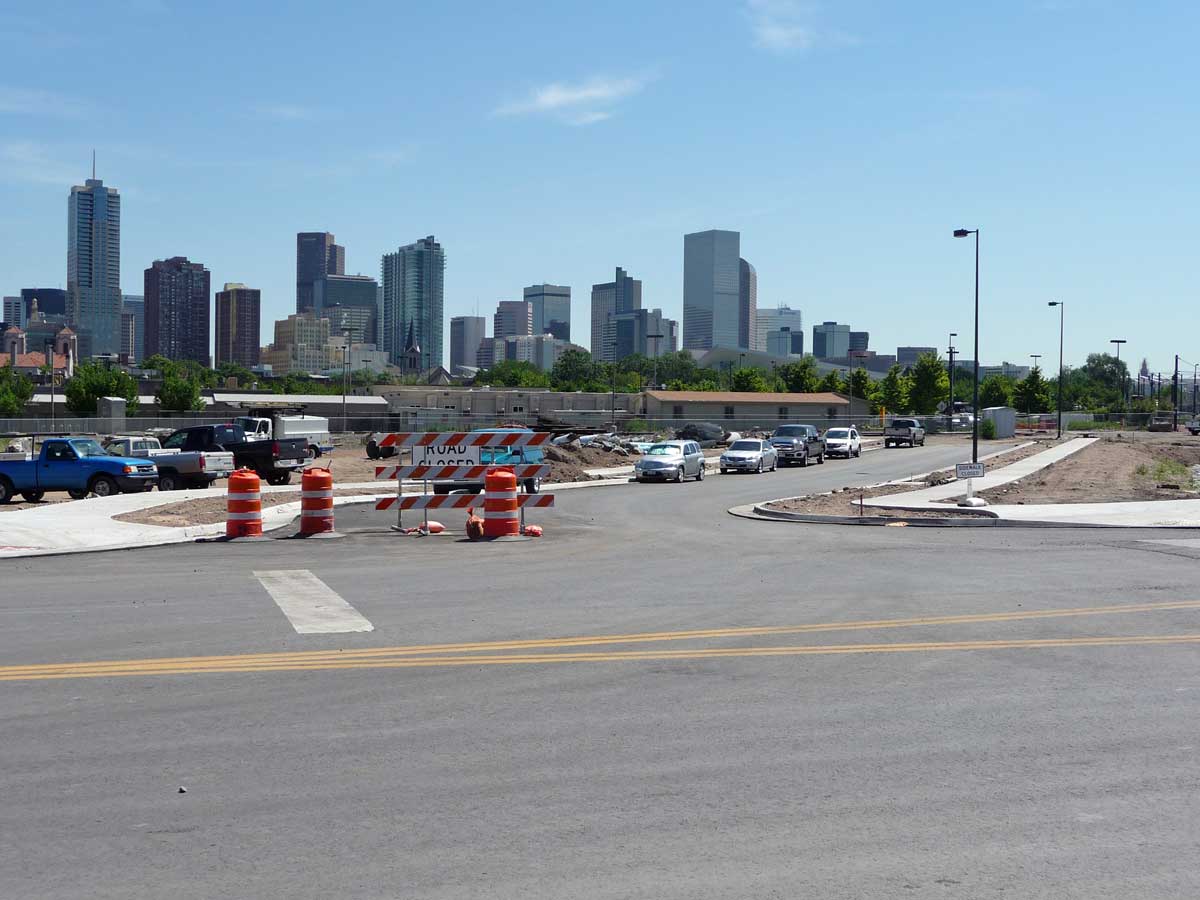 The new Auraria West Station will open August 15, the same day as when the new light rail station at Union Station opens.

By the way, in 2009 the City completed the Auraria West Station Area Plan which takes a comprehensive view at the larger area around the station regarding roadway, bike, and pedestrian improvements, land use changes, economic development, and other issues. You can read the full report by downloading it from DenverGov.org here.