As promised, this is the first post in our up-close examination of Denveright’s planning initiatives. We’re starting off with Blueprint Denver, probably the most well-known planning document that falls under the Denveright umbrella.

For a little context, Blueprint Denver is an integrated land use and transportation plan. It contains no ordinances or codes; it has no “teeth” to ensure compliance with its recommendations. It is a supplement to the City’s Comprehensive Plan, meant to be used as a guiding document to ensure thoughtful coordination between land use and transportation policy. The document outlines the City’s intent to link real estate development to transportation corridors and transit centers, channel job growth toward economically depressed neighborhoods, and stimulate residential activity in new and developing neighborhoods.

The principles underlying the first iteration of Blueprint Denver were developed during the late ’90s, when the City held workshops and visioning exercises for Metro Vision 2020 and the Denver Comprehensive Plan 2000. Though the influx of new citizens was not occurring at the rate we’re seeing today, Denver was in the midst of a population renaissance driven by a strong local economy. The existing zoning code at that time was a convoluted mess, having undergone countless amendments since its last formal overhaul in 1956. It did little to support transit-oriented or mixed-use, pedestrian-friendly development. A comprehensive city-wide approach to change management was viewed as an essential component to the city’s long-term sustainability, and Blueprint Denver became the solution.

The most defining, and arguably most controversial, characteristic of Blueprint Denver was its categorization of small areas and neighborhoods as either Areas of Change or Areas of Stability. Areas of Change were defined as “areas that will benefit from, and thrive on, an infusion of population, economic activity and investment. Areas of Stability include the stable residential neighborhoods where no significant changes in land use are expected over the next twenty years. The goal is to maintain the character of these areas and accommodate some new development and redevelopment that maintains the vitality of the area.” Twenty-six Areas of Change were identified, depicted on the Blueprint Denver map below. Downtown, Lowry, Stapleton, Gateway, and areas around transit stations were highlighted as key Areas of Change. 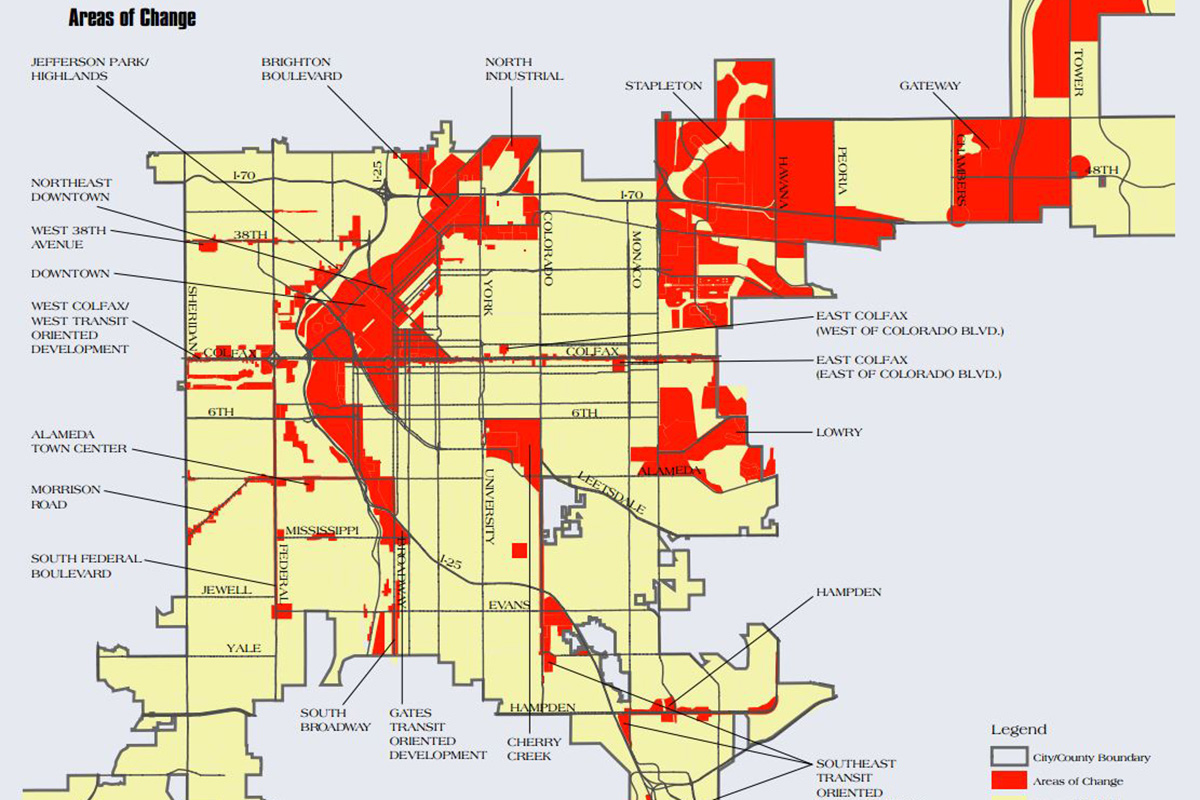 The theory was sound. A simple, binary system to target infill and real estate investment toward areas of the city that most need it, while the stable areas were left to maintain their steady state with the occasional incorporation of minor improvements. And from a city-wide economic and land use perspective, the strategy has been successful. A 2015 article published on Denver Real Estate Watch cites an analysis of residential and commercial building permits issued in 2014. Private investment in Areas of Change outpaced investment in Areas of Stability by a ratio of 5.2 to 1.  But when we experience this Change or Stability land use labeling system through a different lens, as many have in the past 15 years, some negative consequences come to light.

Since its adoption, Blueprint Denver’s Area of Stability label has frequently been used as a rationale to oppose development—NIMBYs can point to a map and argue that the City’s approval of a particular development goes against the plan outlined in Blueprint Denver—blocking what could be the organic evolution of a neighborhood. Even though it is merely an advisory document, Blueprint Denver has become a piece of evidence that proves proposed Development Plan X in an Area of Stability is a zoning violation, will harm the character of the neighborhood, increase traffic, lower property values, or carries any other of a number of negative consequences.

Conversely, the Area of Change label has been used to justify aggressive rates of development that can bring about gentrification, funneling luxury housing and amenities toward low-income areas, with harmful repercussions for the existing residents. The neighborhood has been categorized as an Area of Change, hence, any change in land use should be acceptable.

In hindsight, such applications of the Blueprint Denver labels seem obvious—even predictable. As in-migration has continued to rise, and the demand for housing has become increasingly frenzied, tensions have risen between so-called “pro-” and “anti-” development camps, and any evidence that can be brought forward to support one argument and refute another is considered fair game.

So, that brings us to today. Now that Blueprint Denver is back in the hands of task forces and advisory committees, how should they address the way the document has been interpreted? Is it simply a language issue, where some clarifications need to be made to the intended application of the labeling system? Or is the system itself flawed, and do we need to go back to the drawing board to redesign our framework for future development?