This image, taken on October 15, 2005, shows the construction of what was then known as the Denver Newspaper Agency building, located at the corner of Broadway and Cheyenne Place in Downtown Denver. 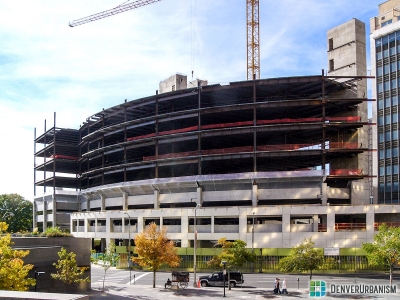 The Denver Newspaper Agency (DNA) was a publishing company that produced both the Denver Post and the Rocky Mountain News under a joint operating agreement. The DNA’s new headquarters overlooking Civic Center Park was climbing to its final 11-story height in this October 2005 photo. A little over three years after this photo was taken, on February 27, 2009, the Rocky Mountain News would publish its final edition, just two months short of its 150th anniversary. Today the building is home to the Denver Post among other tenants.