The last of the new public spaces at Denver Union Station is nearing completion. Known as Tail Tracks Plaza, this new public space fills the gap between the newly completed Triangle Building (recently profiled at DenverInfill in Part 1 and Part 2) and the EPA Region 8 headquarters building. The gap is the old Wewatta Street right-of-way where Wewatta used to run between Delgany and Wynkoop streets before Union Station was built in 1881. 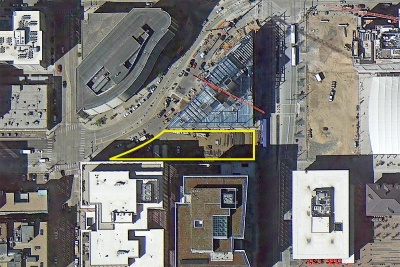 Why is it called Tail Tracks Plaza? Because until the recent transit infrastructure construction, the historic railroad tracks behind the station building merged into a “tail” that crossed 16th and 15th streets and terminated at Cherry Creek. Here’s a Google Earth image from December 2002 showing the tail tracks crossing 16th Street and merging into a singe track that crossed 15th Street. In this image we also see the Gates building under construction and the old Postal Annex building before its demolition. 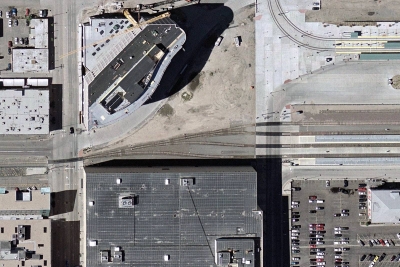 The tail tracks were removed in May 2010.

Tail Tracks Plaza is not yet open to the public, but will be soon. As part of my Triangle Building tour, we checked out the plaza where workers were putting in the finishing touches. Here’s a view from roughly the middle of the plaza looking towards 16th Street. The bold stripe of colored pavers commemorate the historic tail tracks: 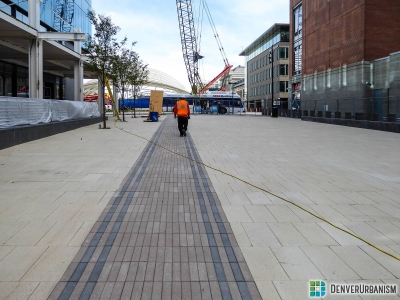 The side of the Triangle Building facing the plaza contains a canopy-covered patio space for restaurant outdoor seating. In the past few days since I took this photo, the canopy structure has been painted a dark grey color to match the Triangle Building’s ground-floor granite and steel elements: 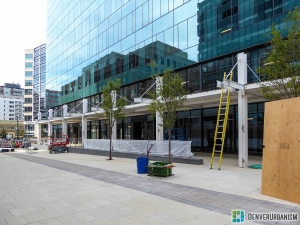 Near the 15th Street end of the plaza are some big swings for kids and adults to enjoy. The swings can fit two people and are destined to become a favorite photo-taking spot for tourists and locals. The swings are supported by railroad tracks that have been curved and welded together for structural strength; a mechanism at the top prevents the swing from swinging so far as to bump into the neighboring swing but still allows a good three to four foot swing motion in both directions. 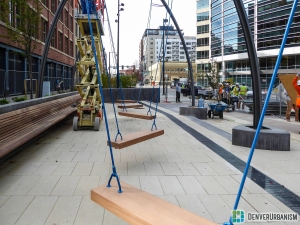 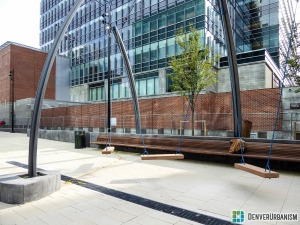 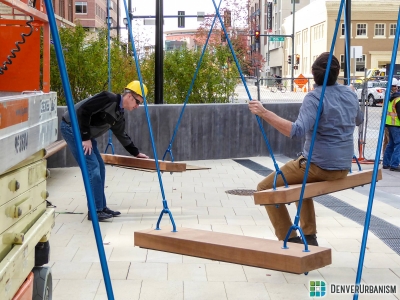 The other major feature of Tail Tracks Plaza that hasn’t been installed yet is the Bike Station at Denver Union Station. For details about the bike station and the services it will offer, check out our blog post from December 2014. It’s being developed by a non-profit group that has been raising funds over the past year or so. Installation of the light station structure, which will sit on top of the plaza’s stone pavers, should begin within the next few months and be open by the time warmer weather returns in 2016.

The bike station will sit near the 16th Street end of the plaza against the short retaining wall on the right in the image below: 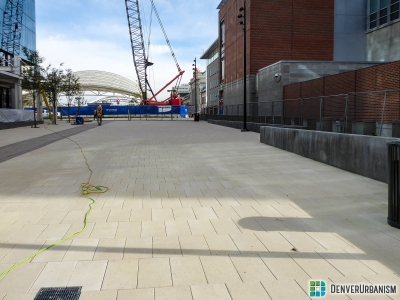 There are the latest renderings, courtesy of East West Partners: 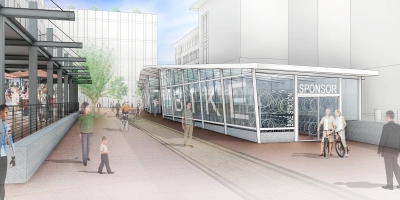 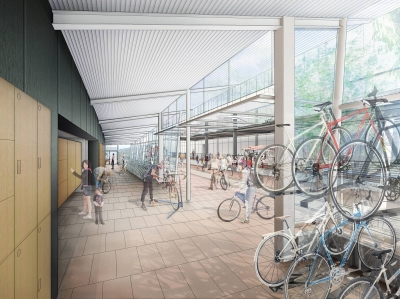 We will visit Tail Tracks Plaza again in the spring after the Bike Station is open. The plaza itself should be open for public enjoyment later this month.