At last week’s Denver Moves Broadway public workshop, the City presented a range of options for transforming the Broadway/Lincoln corridor into a safer, more livable place, while improving mobility for all modes. This corridor has been the focus of many City plans. Most recently, the Golden Triangle Neighborhood Plan envisioned Broadway as a “Grand Boulevard.” This workshop sought feedback on alternatives for implementing that neighborhood vision through a redesign of the travel lanes on both roads and placemaking throughout the corridor. 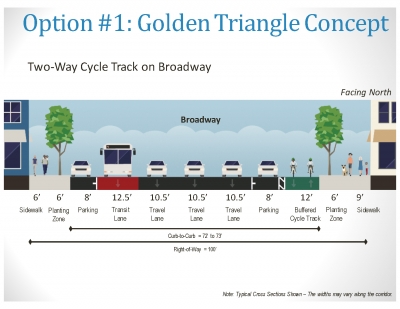 One of three proposed design alternatives presented by the City. Image courtesy of Denver Public Works.

The City offered three different roadway design alternatives that would provide a protected bike facility on the corridor by removing a lane of traffic on either Broadway or Lincoln. Based on current traffic counts and speeds, City planners assert that Broadway could handle losing a travel lane without much increase in congestion. Providing more space for bikes creates the sort of multi-modal environment that is good for pedestrians, too: removing a lane of traffic and narrowing travel lanes will slow down travel speeds and reduce the distance pedestrians must go to cross the street.

The most interesting part of the workshop was the presentation of placemaking concepts for every block of the corridor. Despite the great mix of shops, restaurants and bars along the corridor, the speeding cars and huge space devoted to them don’t contribute to a welcoming place to walk. Proposed placemaking strategies would provide many more amenities for pedestrians and anyone who wants to enjoy the corridor. Enhancements included curb extensions, or bulb-outs, to reduce crossing distances, parklets, landscaping, enhanced crosswalks, and traffic calming. Pedestrians were clearly the focus here: planners envision pedestrian gathering spaces, activation of surface parking lots fronting the road, and a pedestrian-oriented alley.

I was encouraged to see the workshop recorded videos of residents talking about their experiences in the corridor, and what they hoped to see in the future. The videos will be compiled to communicate the community’s goals for the corridor. We can hope that residents’ videos will end up providing additional support for making Broadway and Lincoln streets that work for everyone.