General William Larimer Jr., the self-proclaimed founder of Denver, built a 16’ x 20’ cabin in 1858. In 1882 at the same site, George W. and William N. Clayton erected the current four-story building (The Clayton Building) at 1460 Larimer Square. It housed the MacNamara Dry Goods store, predecessor of the Denver Dry Goods Company. During the 1860s,  William served as mayor of Denver and George served as a city councilman. Their names still stand in the corner roof pediment of the building. After the turn of the century, it became the Granite Hotel (lending to its current name of The Granite Building).

Here is an image of The Granite Building, courtesy of Doors Open Denver. 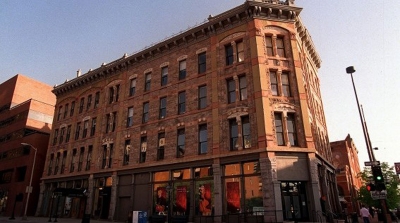 The building was constructed entirely of Colorado materials except for the glass and hardware. . Its restoration uncovered huge plate glass and stained glass windows, cast iron pillars, stamped Colorado Iron Works, and a grand staircase. The cornice of the building was repainted in 2005 and the building is now home to Comedy Works and several office tenants. There will be historic walking tour brochures available for those wishing to explore Larimer Square further. There will also be building information posted on all the buildings.