Doors Open Denver Preview: The Lobby in the Paris Hotel

Original brick walls, European style courtyard, stained glass ceiling, and grand staircase make this a very unique oasis in the city. The Paris Hotel has been listed in the National Register of Historic Places. Originally called Hamburger Block, the Paris Hotel was built in 1891 and is a typical example of late 19th century commercial style buildings in Denver.

George Hamburger was born in Hesse-Darmstadt, Germany, and developed a harness and saddlery business as a young adult. He came to the U.S. in 1871 and spent a year in St. Louis before coming to Denver, where he continued his trade and operated a small store. When Hamburger sold out in 1891 with the hope of retiring, he invested part of his profits in real estate, purchasing four lots in the 2100 block of Arapahoe Street. He hired architect Richard Phillips to design his three-story brick business block. Phillips designed buildings which were solidly fashionable for clients who wanted attractive, well-built structures to display their owner’s good taste and social position. Thus, the Hamburger Block, with its ornate metal cornice, richly detailed brickwork and generous fenestration throughout is an excellent example both of Phillips’s work and of commercial/residential investment buildings in late 19th century Denver.

Here is an image of The Lobby in the Paris Hotel building, courtesy of Doors Open Denver. 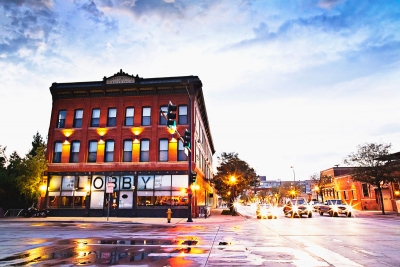 Constructed on a rusticated stone foundation, the flat-roofed building has exterior and interior walls of red brick. Designed for commercial and residential use, the building features a three bay cast-iron storefront on the Arapahoe street façade. The second and third floors on both street elevations are built of fine hard-fired brick work.

From the beginning, the first floor commercial space housed a variety of tenants, from Samuel Samuels who operated a tailor shop, to Brewers and Bottlers’ supply shop. By 1926, all retail space in the Hamburger Block was vacant except for Edward J. Milan who operated the Saxon Hotel upstairs. In 1927-1928 he occupied the retail space with a restaurant which set the following trend for the building’s use.

In 1935, the residential hotel portion of the building reopened as the Paris Hotel, named for its proprietor, Paris Hargis. In 1942 the restaurant space was opened to the basement and a balcony bandstand was added to the first floor. In 1954, the hotel floors were left vacant, although the first floor housing units were occupied until 1965 and the restaurant operating until 1982. Over the next six years, the building sat entirely vacant except for the incidental use by vagrants and the homeless. When rehabilitation work started in 1989, the original second and third floor area of the building was completely rebuilt and three-story apartment units were inserted into the former two-story space. Today, refinished studio spaces occupy the original first floor space.