Republic Plaza is a skyscraper in Denver, Colorado. Rising 714 feet, the building currently stands as the tallest building not only in the City of Denver, but also the entire Rocky Mountain region of the United States. Additionally, the building currently stands as the 109th-tallest building in the United States. The Plaza was designed by Skidmore, Owings & Merrill and built in 1984 by PCL Construction Services, Inc. The building contains 56 floors, the majority of which (1,200,000 sqaure feet) are used as office space, and three retail levels containing shops, restaurants, and service businesses.

Here is an image of the Republic Plaza building, courtesy of Doors Open Denver. 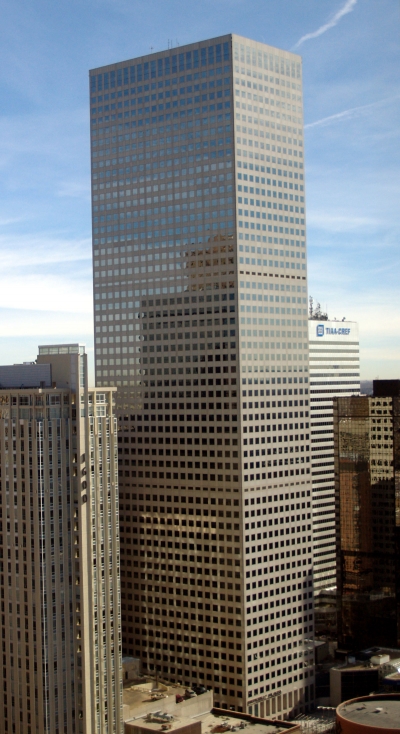 The Plaza is built largely of reinforced concrete clad in Sardinian granite. Also, it contains a 3-story marble lobby that features a quarterly “Art in Public Places” program of Colorado and regional artists. The free public arts program, “Arts Brookfield” offers 2 galleries of outstanding exhibits all year round. This is one of the few large-scale exhibit spaces that are free and open to the public in the metro area. Currently showing are: Photosynthesis, Southwest Voices and Elements at Play by Marc Berghaus.

Simlarly, Republic Plaza is involved in ongoing Denver events. For example, on October 27, 2007, the building’s top 20 stories were lit in purple with giant white letters “C” and “R” to celebrate the Colorado Rockies’ World Series debut. Today, the Republic Plaza is also the home to the American Lung Association in Colorado’s Anthem Fight for Air Climb. The event is held the last Sunday in February and is a 56-story stair climb to the top of the building.