2901 Blake Street originated as the home to Magnus Metals, a foundry. It remains a River North mystery as to how long Magnus Metals operated for, because in 1976 when Noah Siegel bought the building, it had been converted into a moving and storage warehouse. There were rows of Prestone Antifreeze filling the building from floor to ceiling and in one room Noah uncovered a motorboat. Despite the puzzling contents of the building, Siegel believed that the warehouse’s lofty ceilings with is spacious bays would be perfect for housing his company, Eastwood Printing. Thus in 1979 Siegel moved his printing business to 2901 Blake Street where the company thrived under his leadership for next thirteen years.  In 1992, Siegel’s daughter, Sonia Danielsen, bought the family business and proceeded to run Eastwood Printing for twelve more years at 2901 Blake Street. In 2004, Sonia sold her business to Consolidated Graphics, a national printing company, but kept ownership of the real estate. Consolidated Graphics operated in the building for an additional ten years, but in 2014 Sonia was faced with dilemma.

Here is an image of the Bindery on Blake building, courtesy of Doors Open Denver. 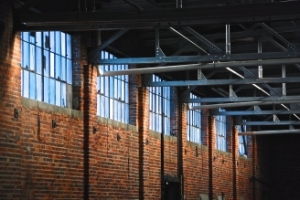 The printing industry was shrinking and Consolidated Graphics was forced to discontinue their operations at 2901 Blake Street, thus Sonia needed to decide what the future of the building would hold.  She was repeatedly approached by a number of developers hoping to tear down 2901 Blake Street and build a trendy five-story apartment complex in its place. However, Sonia felt invested in the rich history of 2901 Blake Street and couldn’t bear to see the 100-year-old building with its aged brick façade and clearstory windows demolished.

At this point in time, the River North neighborhood was growing and transforming into a nexus of Denver culture. The area was booming with local businesses and had developed a flourishing arts scene. Sonia acknowledged this shift, and decided that her building needed to be repurposed to fit the changing environment of River North. Thus, she embarked on a project to conserve the architectural and historical integrity of the building, while making its function relevant to the neighborhood.

In 2014 Sonia began the process of renovating 2901 Blake Street with the intent to create a suitable environment for creative office and retail space. To start the transformation process, Sonia had the white and silver paint removed from the walls, revealing beautiful red brick. Then she replaced the leaky roof, fixed 400 broken clerestory windows, and redid the street level windows with new energy efficient storefront glass. After this, she shifted her attention to the back of the building where there was a concrete train dock used to bring in raw materials for both Magnus Metals and Eastwood Printing. She decided to transform this dock into a covered patio with views of Longs Peak. The original building has retained its riveted steel trusses, and large open bays with tons of natural light from the 8,000 original steel-sashed clerestory windows. The building’s structure and history remains intact, but the building is primed to become a space for collaborative businesses.

Thus, it is appropriate that new name for 2901 is the Bindery on Blake, because the latest renovations hope to bind the building’s rich printing history with a future of creative business and innovative ideas.