Kirkland Museum of Fine & Decorative Art features a celebrated international decorative art collection, including fabulous examples of furniture by over 90 architects, including Frank Lloyd Wright, Charles Rennie Mackintosh and Gio Ponti. Kirkland Museum is partially housed in Denver’s oldest commercial art building (1910, 1911), built by Maurice Biscoe and Henry Hewitt. This building was first used for Henry Read’s Students’ School of Art, and also served as a meeting place for the fledgling Denver Art Museum until 1922. Colorado painter Vance Kirkland rented the building from Read in 1932, later acquired it, and left it as part of his estate to Hugh Grant when Kirkland died in 1981. Administrative office space for the Kirkland Foundation (founded by Mr. Grant in 1996) was added in 1998 and 1999 and the museum, which incorporates the original studio building and a second 9,400 square foot addition, which was completed in 2002 and opened to the public in April 2003.

Kirkland Museum is a member of Historic Artists Homes and Studios, a program of the National Trust for Historic Preservation. Kirkland Museum is a National Trust Associate Site in the Historic Artists Homes & Studios Group, the only one in the eight-state Mountain/Plains region.  In 2002 a brick addition provided for more space, disabled accessibility and Frank Lloyd Wright windows while preserving a view of the original studio’s exterior wall and roof tiles. The Arts and Crafts style of the building was adventurous for the time period in which it was built.

Here is an image of the Kirkland Museum of Fine & Decorative Art, courtesy of Doors Open Denver. 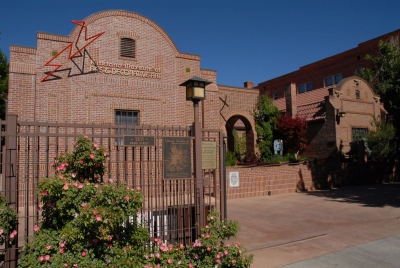 This museum displays an extensive international decorative arts collection from 1855 to the present with over 3,500 examples of Arts & Crafts, Bauhaus, Art Deco, Modern and Pop Art on view. A modernistic collection of regional painters, sculptors, ceramists, furniture designers and a retrospective of Colorado painter Vance Kirkland (1904-1981) are also featured, all shown in an intimate, salon-style atmosphere.

Kirkland Museum is a must see in 2015 because the museum is moving! Opening in 2017, Kirkland Museum will move to a new home designed by Seattle-based Olson Kundig Architects at the northwest corner of 12th Avenue and Bannock Street, in the heart of Denver’s Golden Triangle Museum District. The new building will be approximately four times the size of the current museum. Groundbreaking will take place in 2015. Critical to the project will be the relocation of the original building that housed Vance Kirkland’s studio and art school. The 1,600 square foot building will be detached from the existing museum and placed on the north side of the new building.

PLEASE NOTE: children under 13 are not admitted inside.