Built in 1890 by Brown Palace Hotel architect and 33rd degree mason, Frank E. Edbrooke, this Romanesque building is known to its club-members as Oriental Lodge number 87. It was formally granted approval to serve as Colorado’s Lodge on June 15, 1891, and added to the National Register of Historic Places in 1977. The year 2009 marks the 150th anniversary of the first Masonic meeting in Colorado.

Here is an image of the Masonic Temple, courtesy of Doors Open Denver. 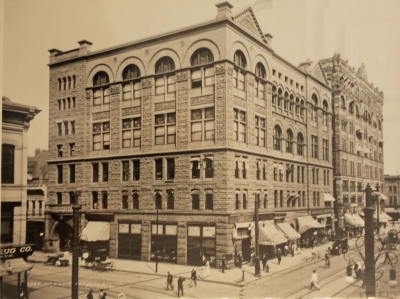 Unfortunately, the interior of the building was destroyed by fire on March 4, 1983, although the interior of the historic façade has been rebuilt. Today, the 4th and 5th floors are owned by a non-profit fraternal group called the Freemasons, and the remainder is owned and operated by a commercial real estate company.This building preview is part of DenverUrbanism’s special countdown series to Doors Open Denver 2015. Click here for more information on Doors Open Denver.