This mansion, built in 1908, has been home to many important men in Denver’s history including the Cheesman family, the Boettcher family and all of the Governors of Denver since 1960. This three-story mansion was designed by Denver business mogul, Walter Cheesman, as his family’s residence. He originally hired Grove and Walsh to build his home but after his death in 1907, the project had not even been started. Walter Cheesman’s wife and daughter, Alice and Gladys, hired Willis A. Marean and Albert J. Norton, whom impressed them with the Cheesman Pavilion. The total cost of the building was $50,000. The house was completed in 1908, hosting the wedding of Gladys Cheesman to the lifelong friend and childhood sweetheart, John Evans, who was the grandson of Governor John Evans. After Alice Cheesman’s death, the house was bought by the rich and benevolent Boettchers. The family later bequeathed it to the State of Colorado in 1959 as the home to the sitting Governor. The first Governor to live in the house was Governor Stephen McNichols in 1960.

Here is an image of the Governor’s Residence at the Boettcher Mansion, courtesy of Doors Open Denver. 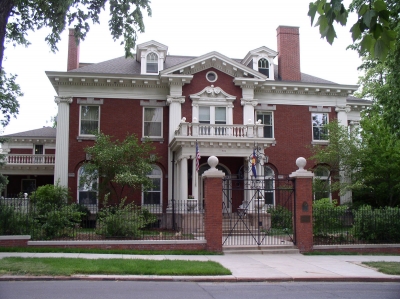 Noteworthy are the portico with Ionic colonnade, upper terrace with Italianate balustrade, large windows with a view of Pike’s Peak and resplendent interior. For nearly 100 years this mansion has stood atop a neighborhood once referred to as Quality Hill. Interior features of note: Colorado Yule marble floor in the Palm Room; cross-cut inlaid oak paneling on the walls of the Library; leaded glass windows in the Bar & Palm Room, designed by Claude Boettcher; Waterford crystal chandelier in the Drawing Room; 18th century French chandeliers in the Grand Hallway; 9th century Tang Dynasty Funeral Horses displayed in the Library; 16th-19th century European and Asian artwork and furnishings throughout the first floor. Exterior features to look for include: a limestone gazebo located in the east lawn; tiered gardens with brick walkways leading to the Carriage House at the south end of the property; and the refurbished Carriage House and courtyard adapted to use as an event facility.

In 1979 part of Pennsylvania Street was closed off and turned into a grass-covered connection between the Governor’s Mansion and the Grant-Humphrey’s Mansion, which was donated to the State of Colorado in 1979. The Cheesman-Boettcher Mansion/Governor’s Mansion was landmarked locally in 1968. Furthermore, the mansion was designated a Denver Landmark in 1968 and placed on the National Register in 1969.