The Bovine Metropolis Theater is home to the Bovine Metropolis Theater, an improvisational performance and comedy theater. The Filbeck Building is a historic Denver structure built in 1917. Located next to the Roger & Son Mortuary/Yankee Dollar Building, it has also served as home to the Champa Bar and the Changing Scene Theater. The Filbeck Building was designed by architect John J. Huddart, who served as Chief Draftsman for prominent Denver-based architect Frank Edbrooke during 1882-1887, and who himself became well known as a courthouse architect, producing at least eight courthouses in Colorado and many others in surrounding states. Come visit this three-story brick building with terra cotta finishes that has housed live theater for over 45 years.

Here is an image of the Bovine Metropolis Theater, courtesy of Doors Open Denver. 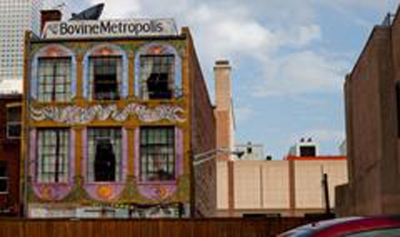