The Byers-Evans House Museum was home to two prominent families in Denver’s past, and was built in 1883 by William N. Byers, founding editor of the Rocky Mountain News. This Denver landmark has now been transformed into a public learning center. Although the architect is unknown, this middle class home was built in the Italianate style of architecture, featuring wide eaves and a flat-pitched roof.  In 1889, the home was sold to William G. Evans, President of the Denver Tramway Company and the son of Colorado’s second Territorial Governor.  The Evans family made five additions to the home prior to 1912, almost doubling the size of the original structure. The home remained in the Evans family for nearly 90 years and was given to History Colorado in 1981 along with its contents. The Byers-Evans House has been beautifully restored to the period between 1912 and 1924.  Polished wood finishes, brightly patterned wallpapers, ornate mantels, and period draperies form a backdrop for the rich variety of Evans family furnishings.

Here is an image of the Byers-Evans House Museum, courtesy of Doors Open Denver. 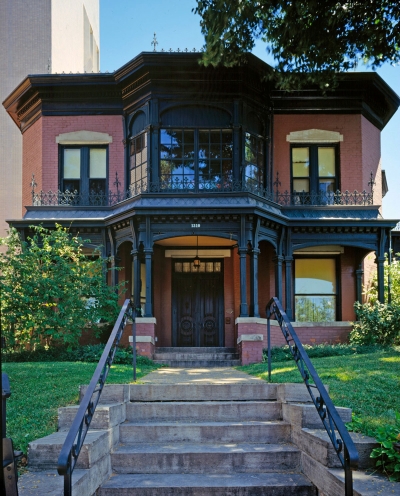 The Byers-Evans House Museum is listed on the National Register of Historic Places (1970) and has been designated a Denver Landmark (Number 5, 1963). Although the Byers-Evans House Museum was built before City Beautiful was put in place in 1900, its modern use as a public educational building fits the ideals of the project. The location on 13th Street is also important to City Beautiful because it sits just on the fringes of Civic Center Park, the biggest project Mayor Speers pushed during the City Beautiful movement.