Designed as the main Denver post office, the Byron R. White U.S. Courthouse building was remodeled in 1983 and 1994 to become the current courthouse. Although a 1994 renovation covered the skylights, the building is brightened by exposure to the interior courtyard and recreations of the original cast bronze sconces. The same architects were hired to design the U.S. Post Office and Federal Courthouse, and it reveals interesting clues that tell a long and rich Colorado history.

The Courthouse occupies an entire city block and stands four stories in height, set above the street in its rusticated base. There are a series of grand stairs that lead to the main entrance and are marked by 16 three-story ionic columns adorned with eagles. On the frieze above the main entrance is inscribed the cities to the east and west of the building, symbolizing the flow of mail across the country. Inscribed on either side of the colonnade are the names of the U.S. Postmaster Generals. Also inscribed on the internal wall piers are names such as Buffalo Bill Cody, one of the most well known Pony Express riders. These riders are an important part of the history of the postal service in the American West. The main entry lobby spans the width of the building, with a terrazzo floor and vaulted ceilings. Notable artwork includes a pair of Rocky Mountain sheep, along with four murals by artist Herman T. Schaldermundt, completed in 1918 and recently restored through GSA’s Fine Arts Program. Details will be available upon entering the building at a self-help station.

Here is an image of the Byron R. White U.S. Courthouse, courtesy of Doors Open Denver. 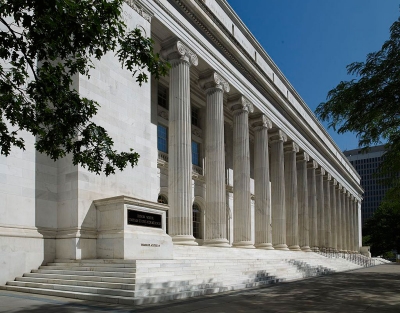 The U.S. General Services Administration (GSA) invites you to celebrate Denver’s unique architectural landscape by participating in Doors Open Denver 2015, and visiting the Courthouse, among others. Take a step back in time and visit a building that served as a model for other local building projects and its influence can still be seen in other governmental and public structures throughout downtown Denver. GSA’s Fine Arts Collection is one of our nation’s oldest and largest public art collections. It consists of permanently installed and moveable mural paintings, sculpture, architectural or environmental works of art, and works on paper dating from 1850 to the present. These civic works of art are in federal buildings and courthouses across the United States.

Maintained by GSA as a part of our national and cultural heritage, the Fine Arts Collection serves as a reminder of the important tradition of individual creative expression. Throughout history architectural works are often perceived as cultural and political symbols, as well as works of art. Find one of Denver’s hidden historical treasures by participating in Doors Open Denver.