Every time it snows, vast sections of city streets remain covered by snow long after plows and moving cars have cleared the travel lanes. These leftover spaces are called “sneckdowns,” and they show where sidewalks or medians could replace roads without much loss to car drivers. 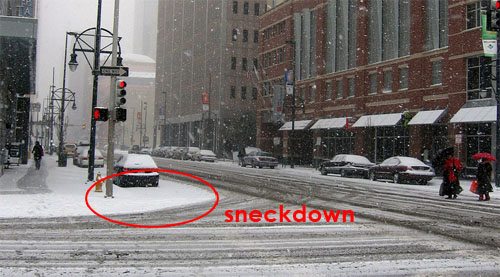 The term sneckdown is a portmanteau of “snow” and “neckdown,” the latter being another term for sidewalk curb extensions. So it literally means a sidewalk extension created by snow.

New York’s biggest urbanist blog, Streetsblog, put out a call for photos of sneckdowns in the wild earlier this winter. They’ve received plenty of responses.

Be on the lookout for these as winter continues to roll along.