It’s time to take a final look at the Denver City Center plaza as it is now complete! This plaza, situated on 17th and California, has gone through a major renovation and has given new life to this intersection. Here are all the previous updates for this project.

Today I have a huge photo tour covering all the new elements of this renovation. Let’s start off with the 18th Street side. 707 17th Street is a mixed use building with two entrances. Before this project, each entrance looked very different and nothing was uniform along the street. Now, both entrances are clearly marked and the same materials are used on both sides of the building: a steel and glass awning, wooden ledges, and uniform stairs. 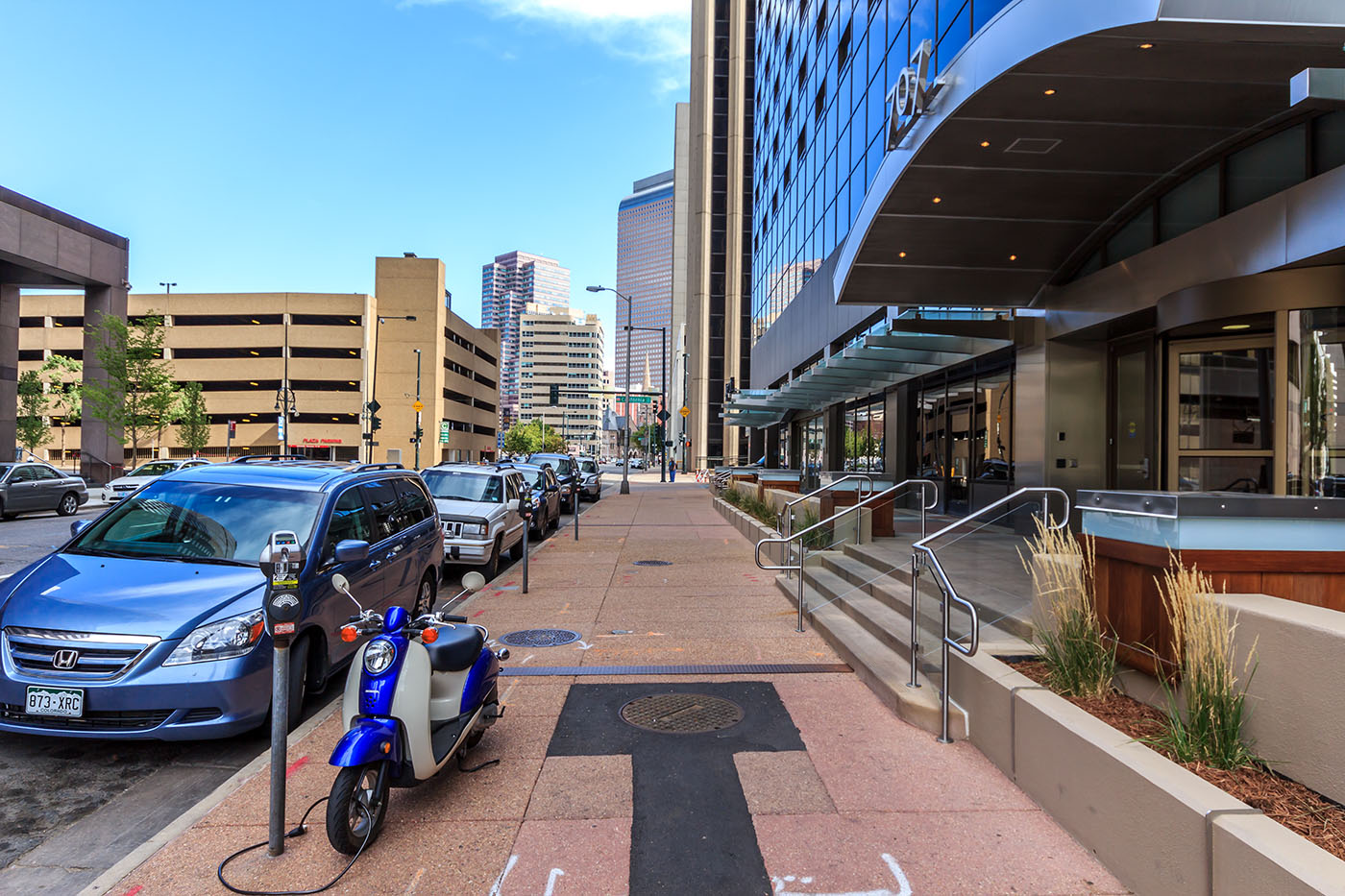 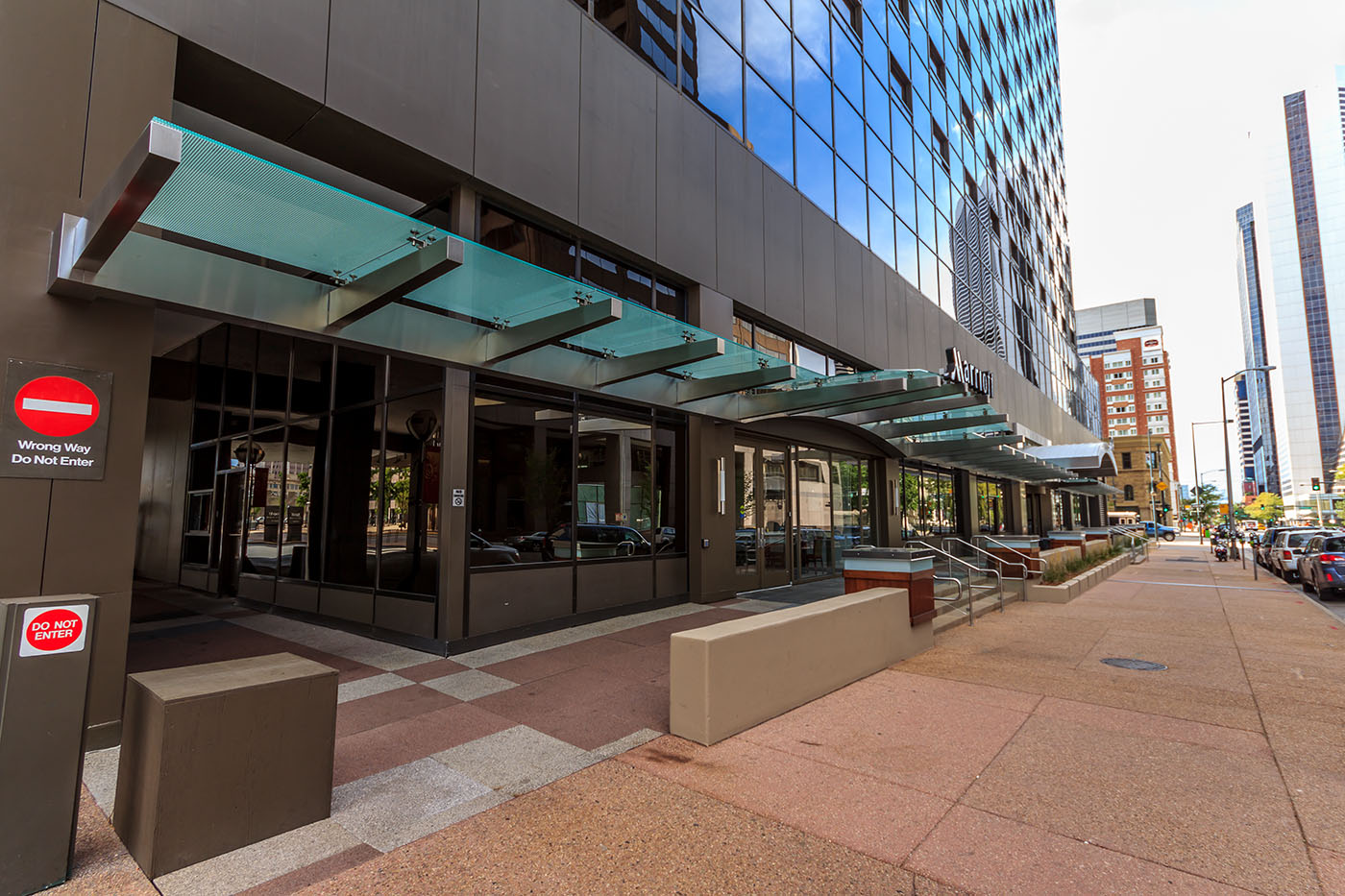 The 17th Street side is a little bit different because there are no entrances to the buildings along this street. Instead, there are glass awnings and signs attached to the Johns Manville Plaza building clearly marking the entrances to the retail.

The Stout Street side is more or less the same as 17th Street minus a new entrance to Johns Manville Plaza. There is also an inward facing triangular set of benches interestingly placed along Stout as well. 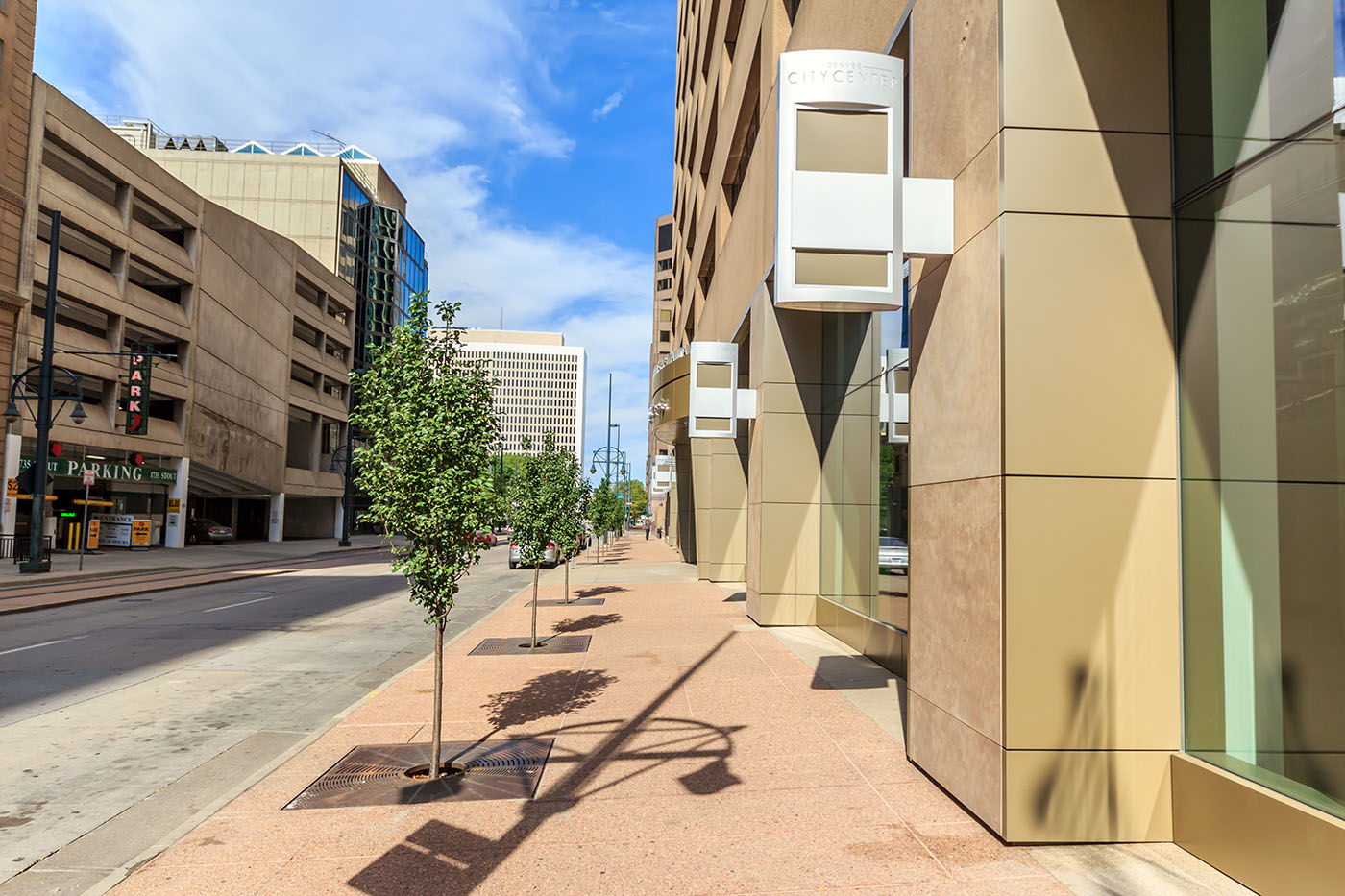 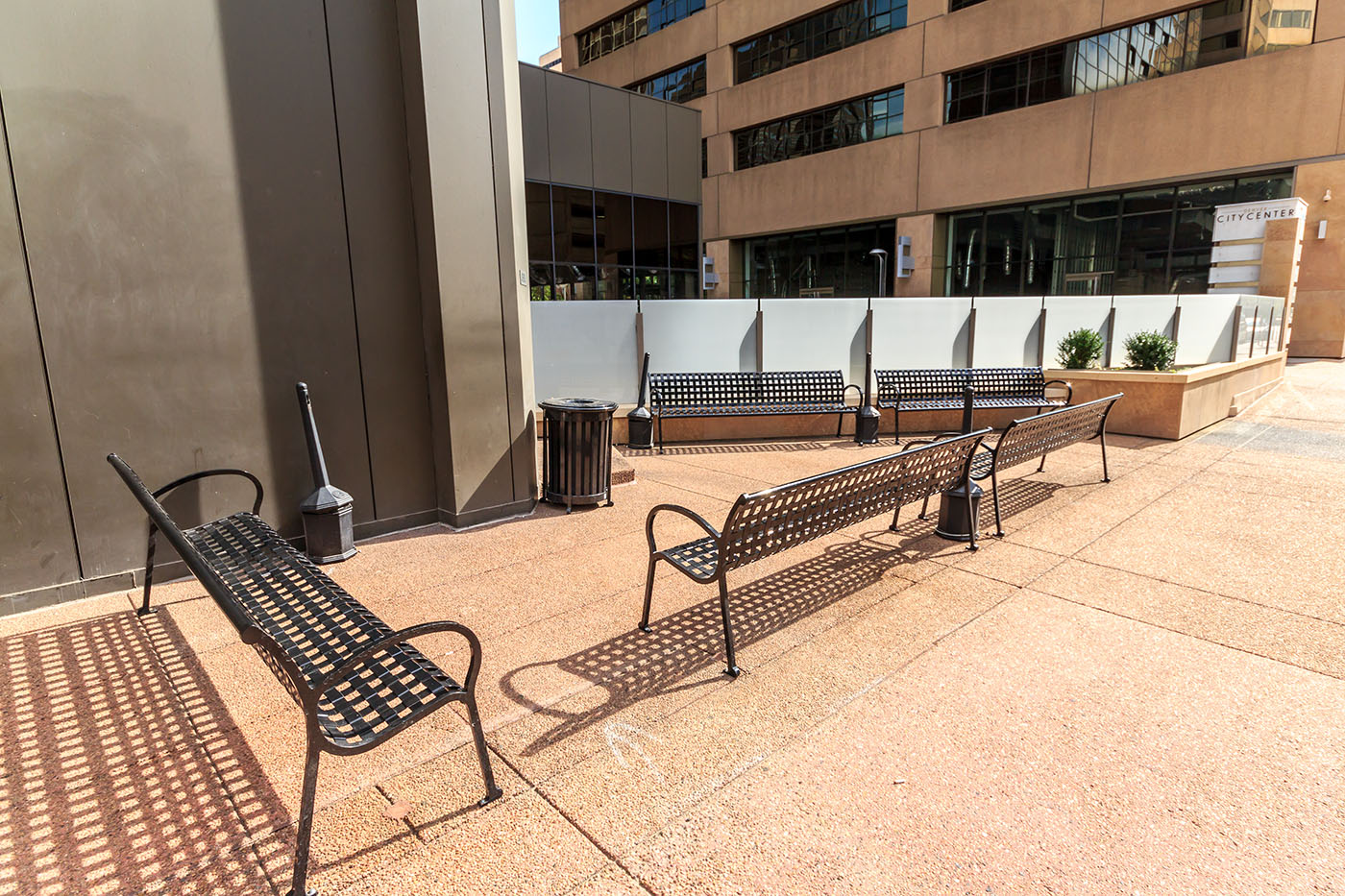 Heading towards 18th along Stout you will also find the new bus shelters. The rounded edge steel and translucent glass is a reoccurring theme throughout this whole block and it looks pretty sharp! 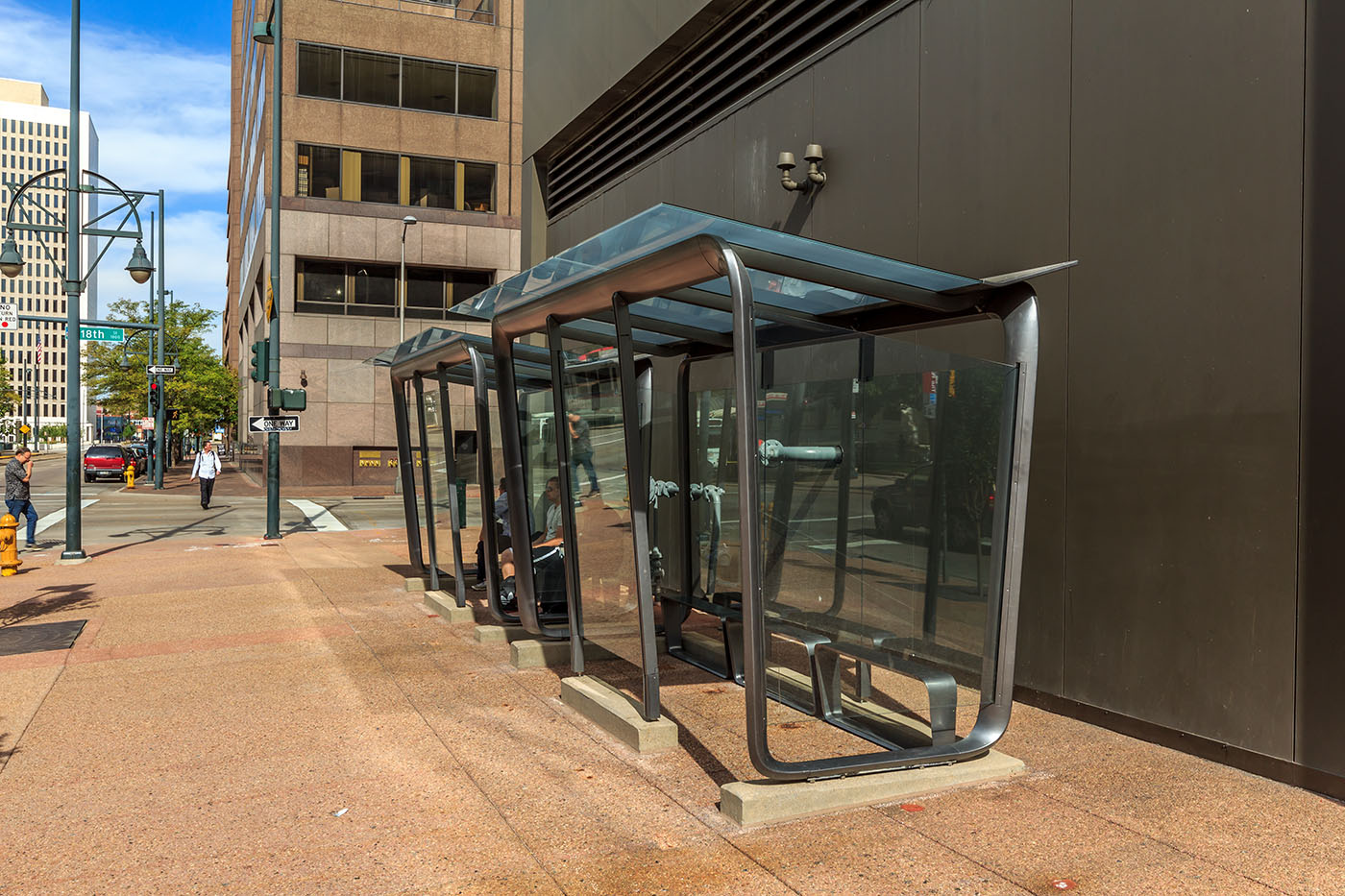 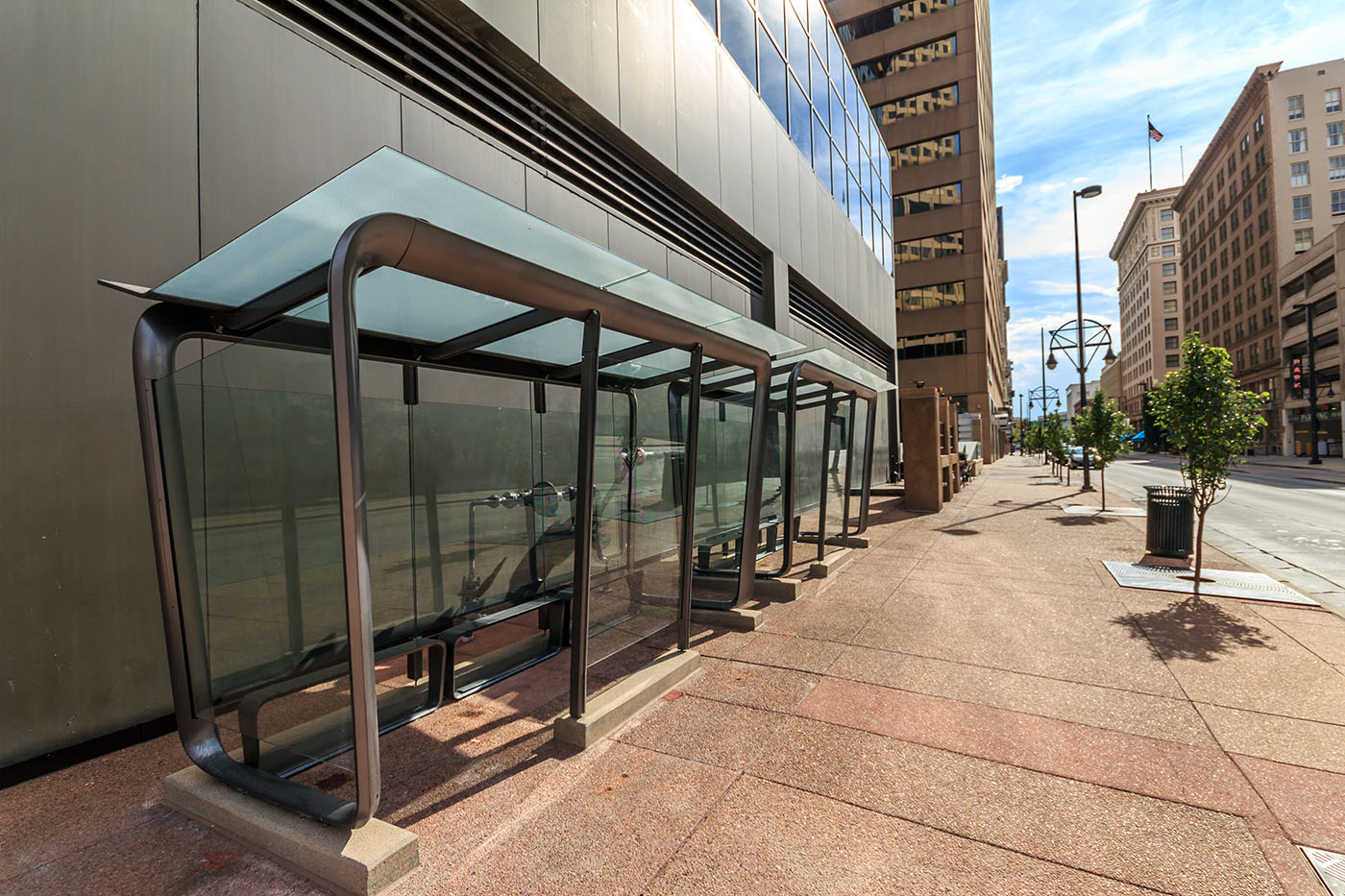 Here is a closer look at the outer facing ground floor retail pads. Once again, there is a translucent glass awning with ‘Denver City Center’ signage on the outside. 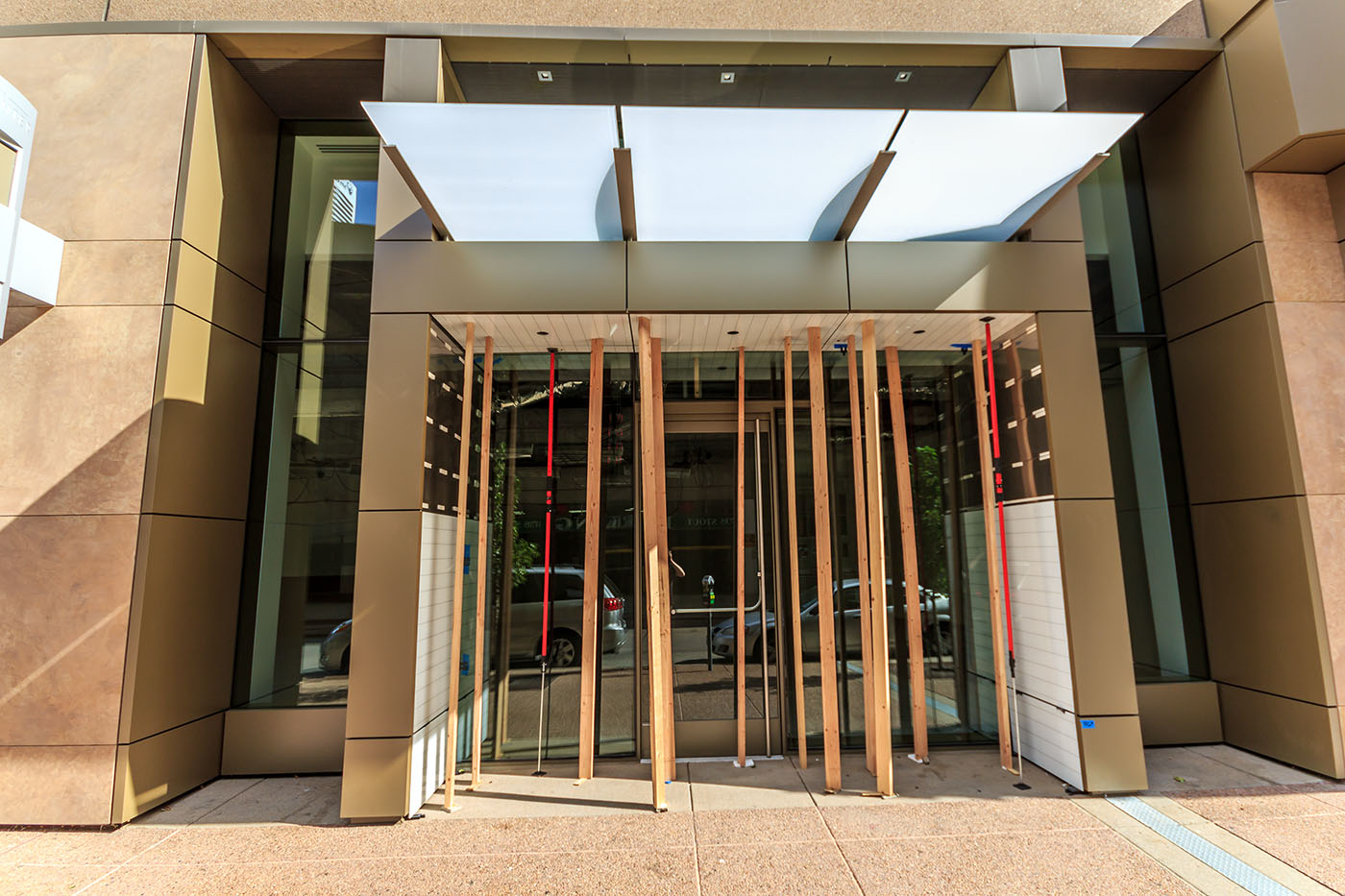 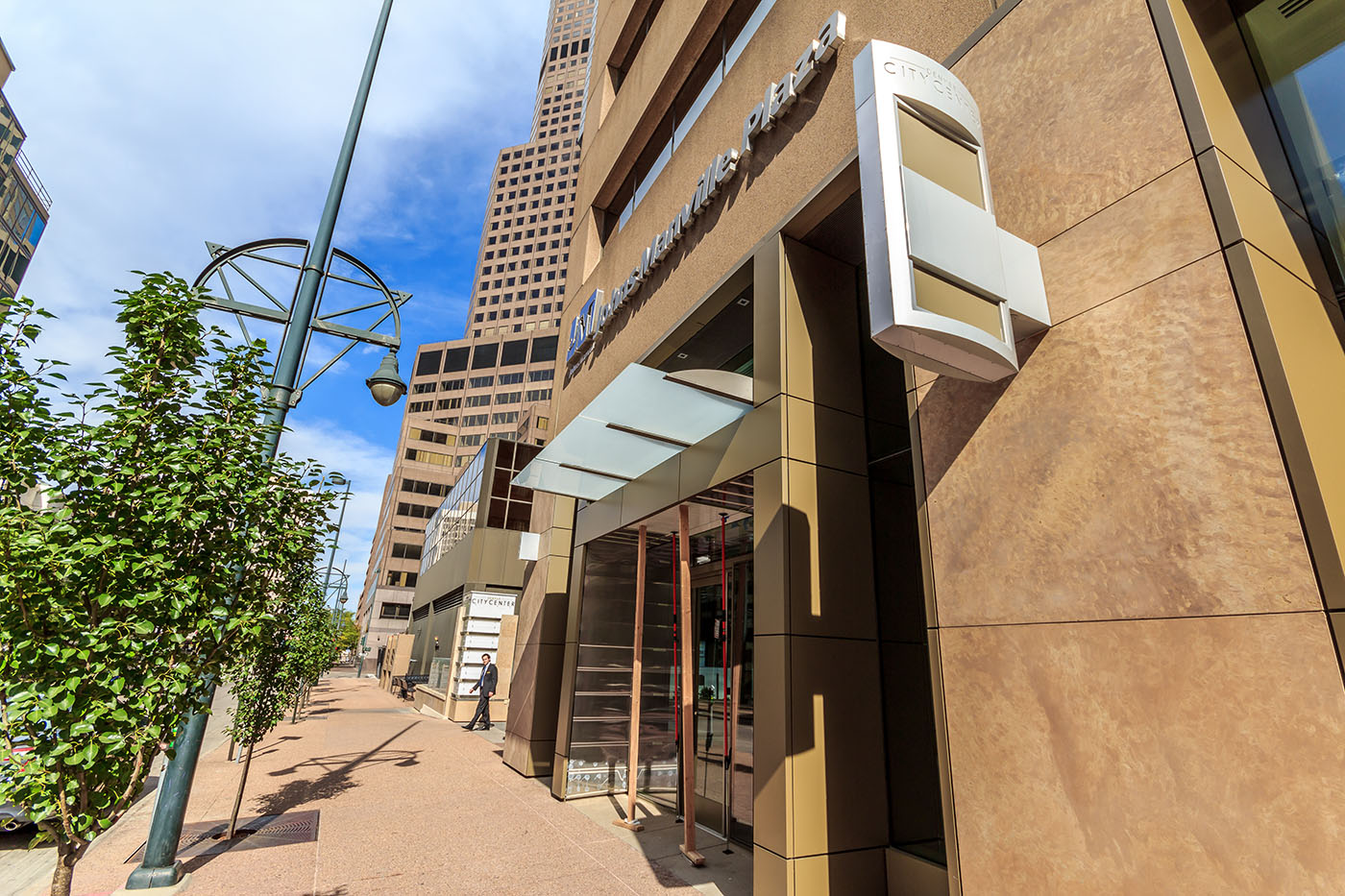 There are two entrances to the Denver City Center plaza, one off of California and the other off of Stout. Each entrance will be very well lit thanks to the new sleek street lights that were installed. 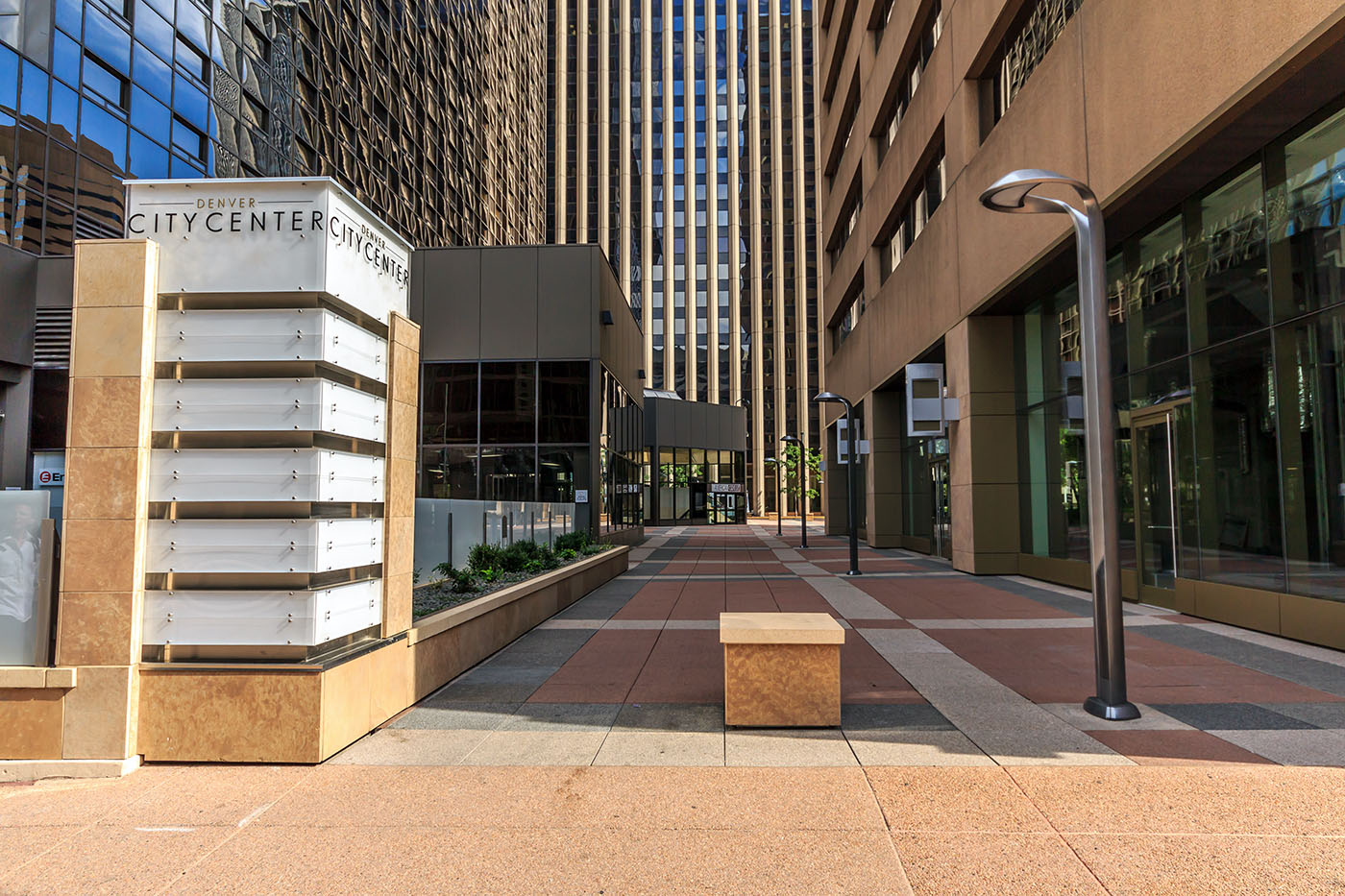 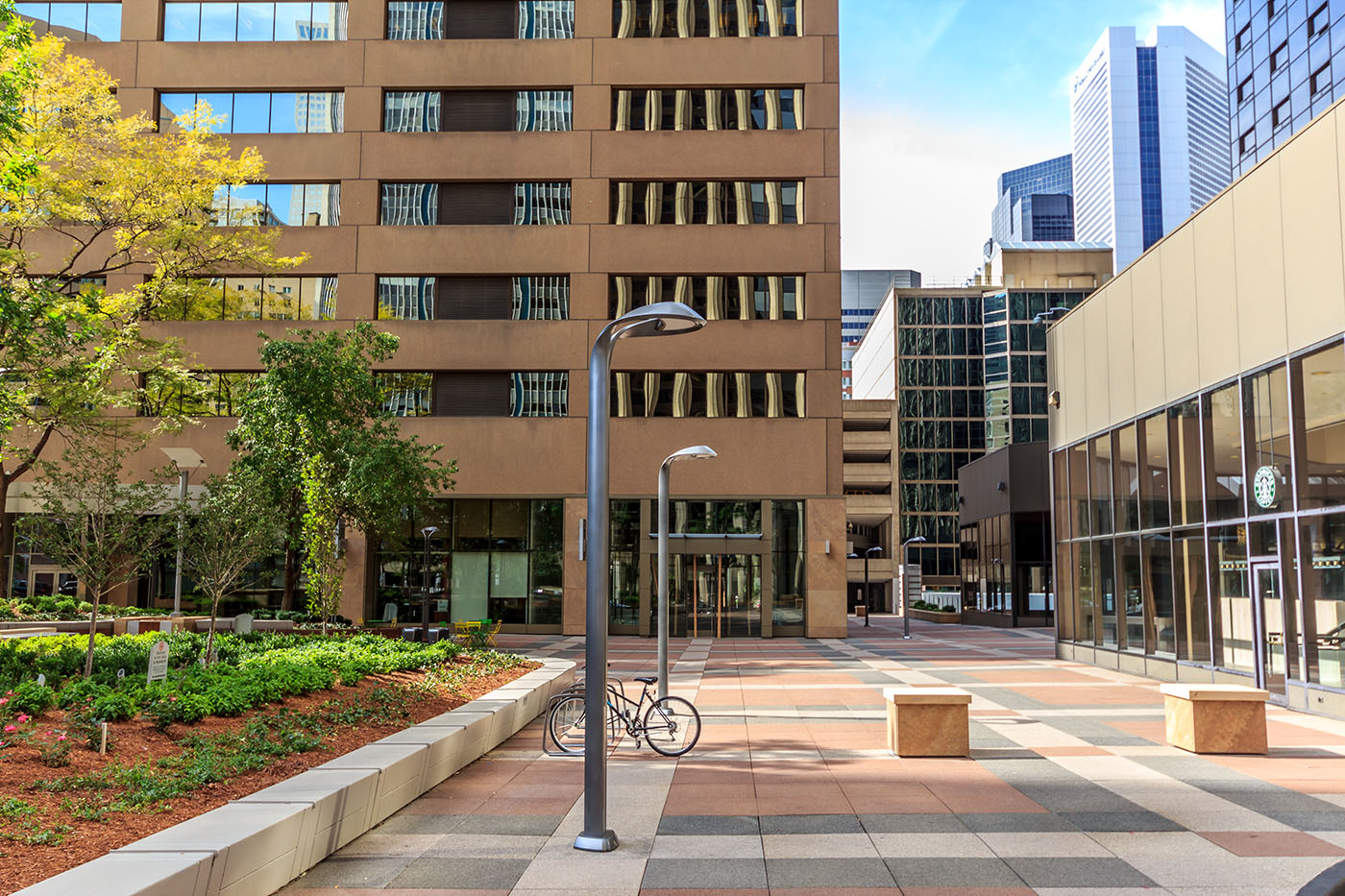 The entrances off of 17th street are also very inviting. Here you will find the same signage, bike racks, and resting areas. 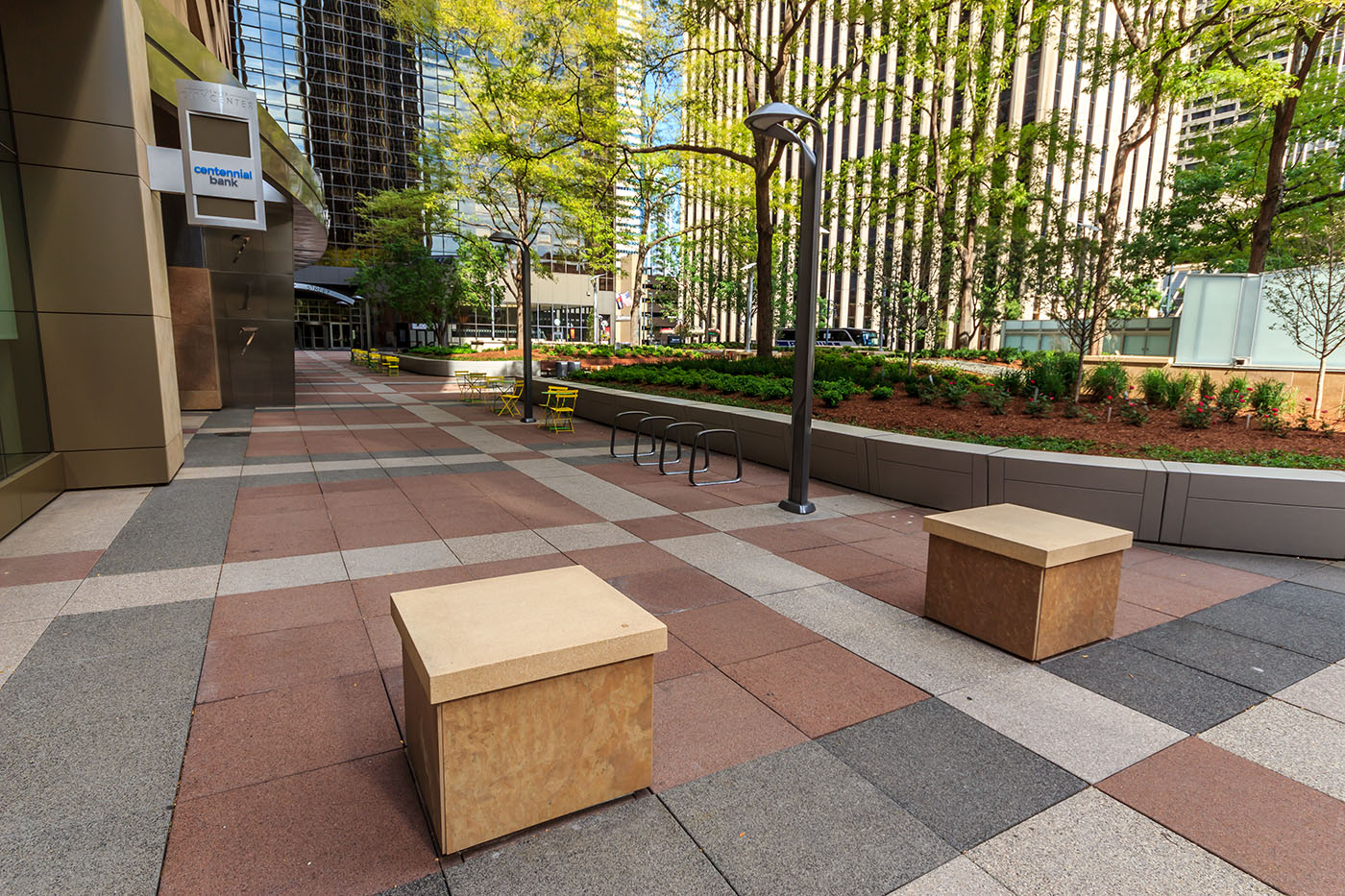 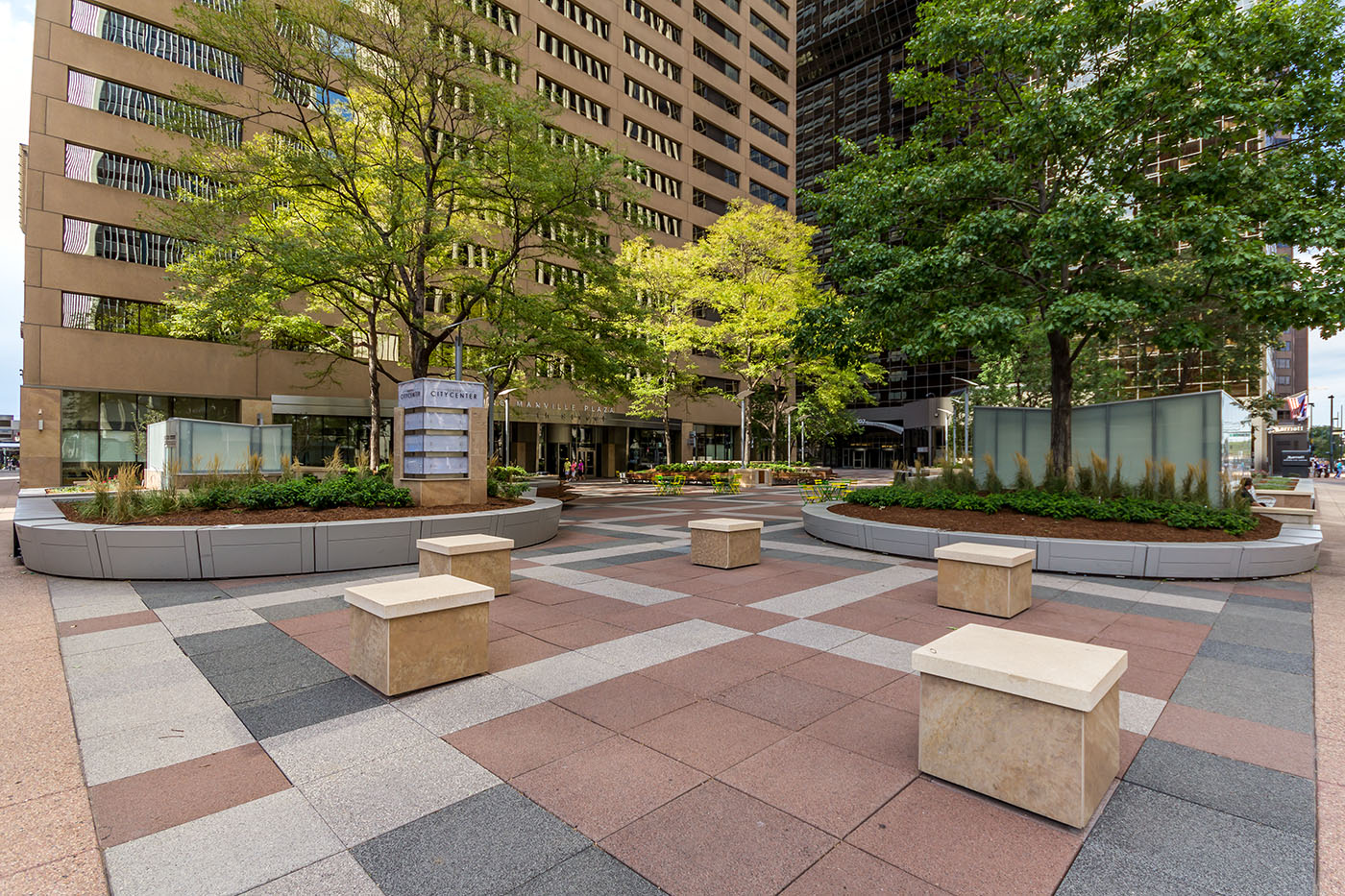 Let’s take a look at the plaza itself. Even though the idea of a plaza in front of office buildings is a thing of the past, this is a great example of what the modernization of an existing plaza should look like. There is ample seating, great tree coverage, tables and chair scattered throughout, and color patterned concrete clearly marking the plaza. 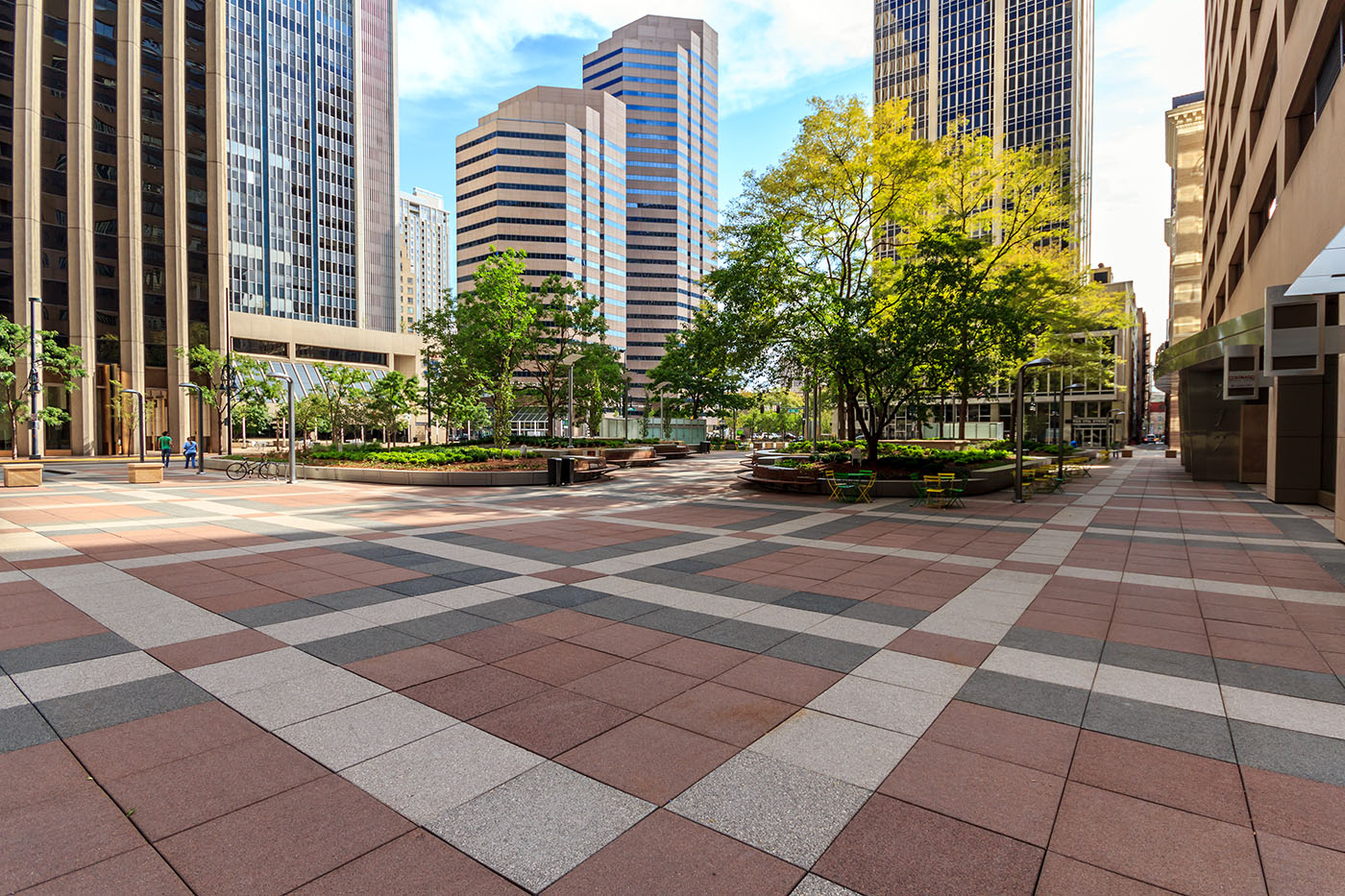 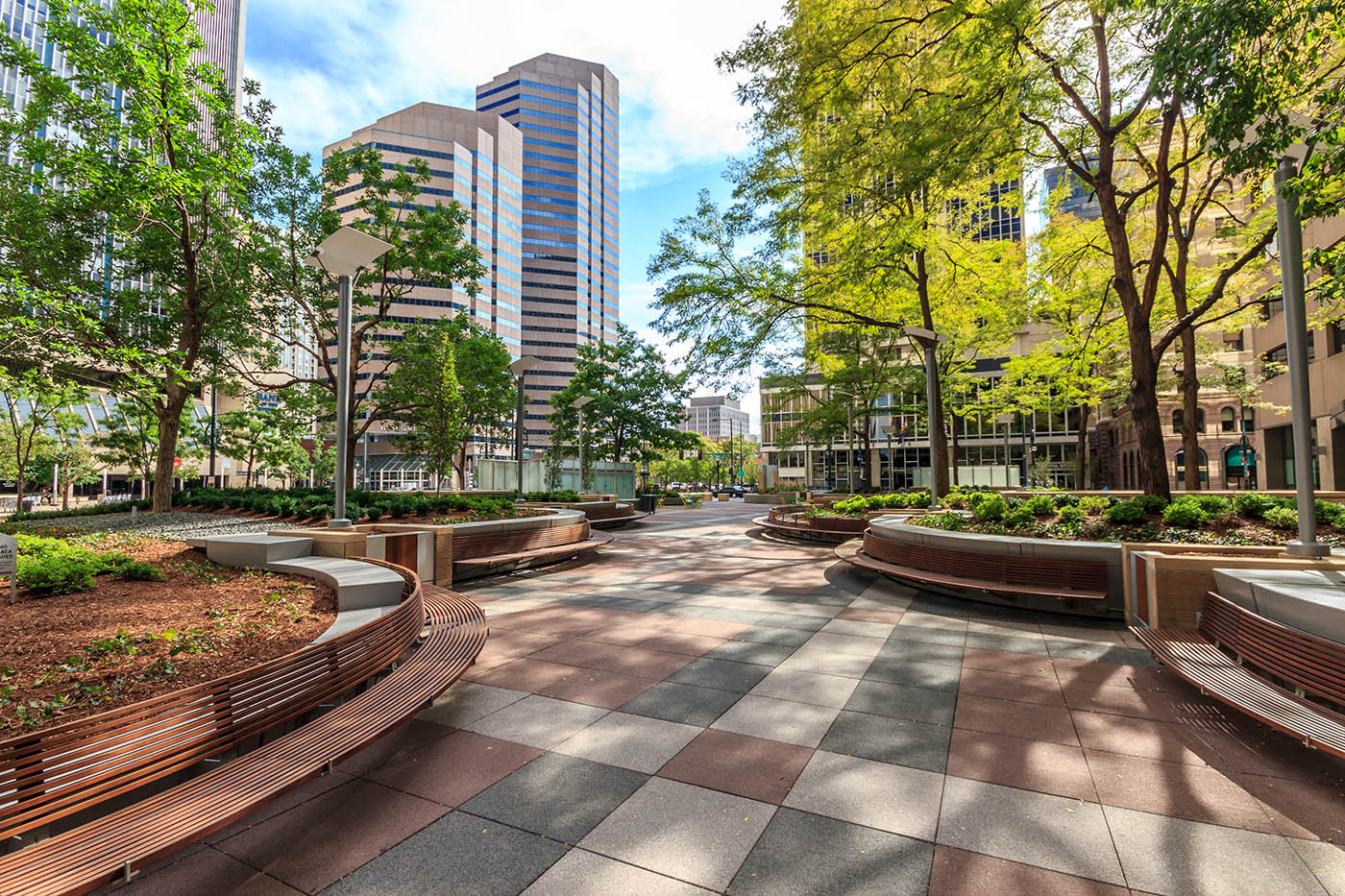 The tables and chairs are bright yellow and green adding a nice splash of color. 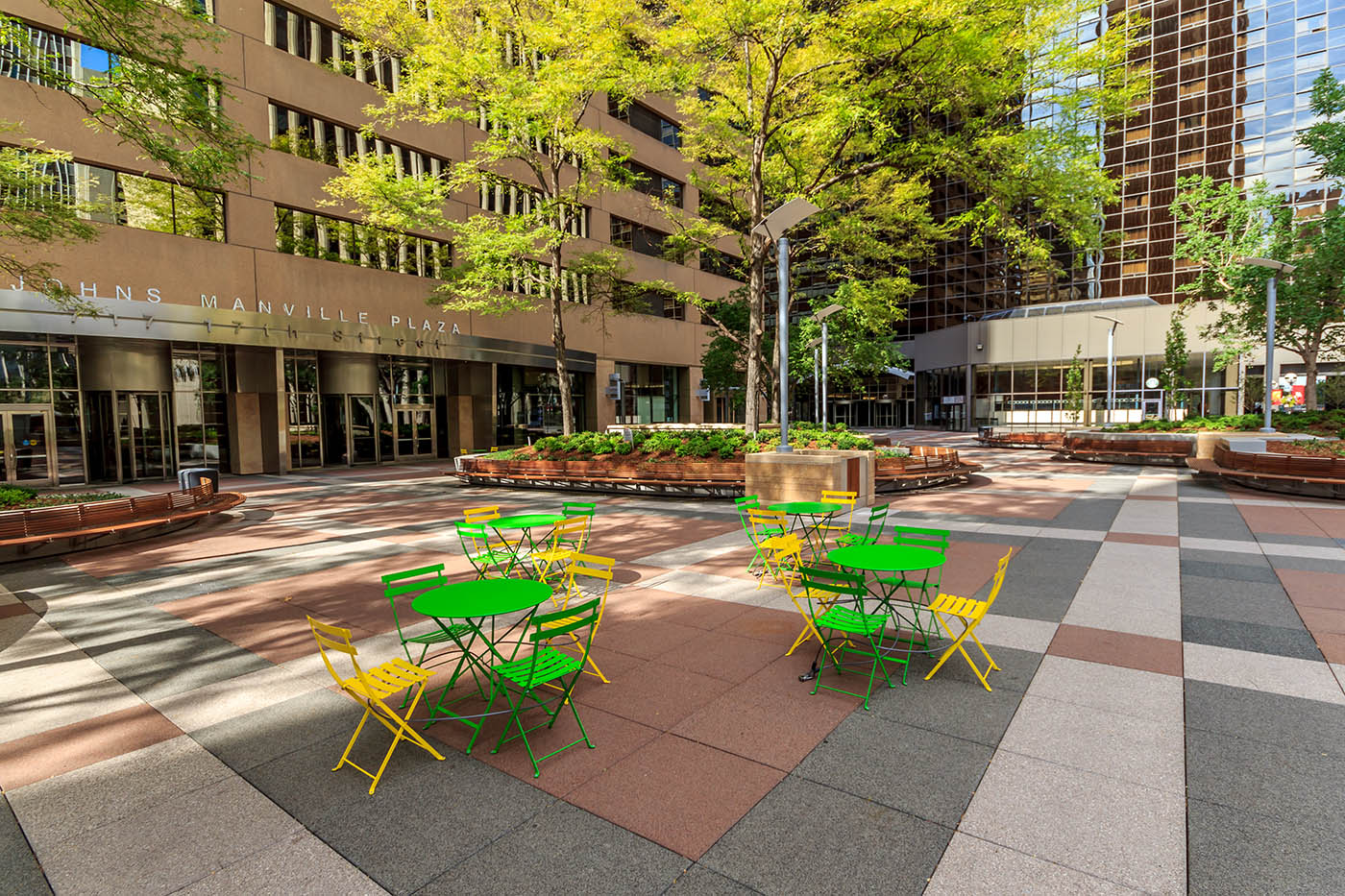 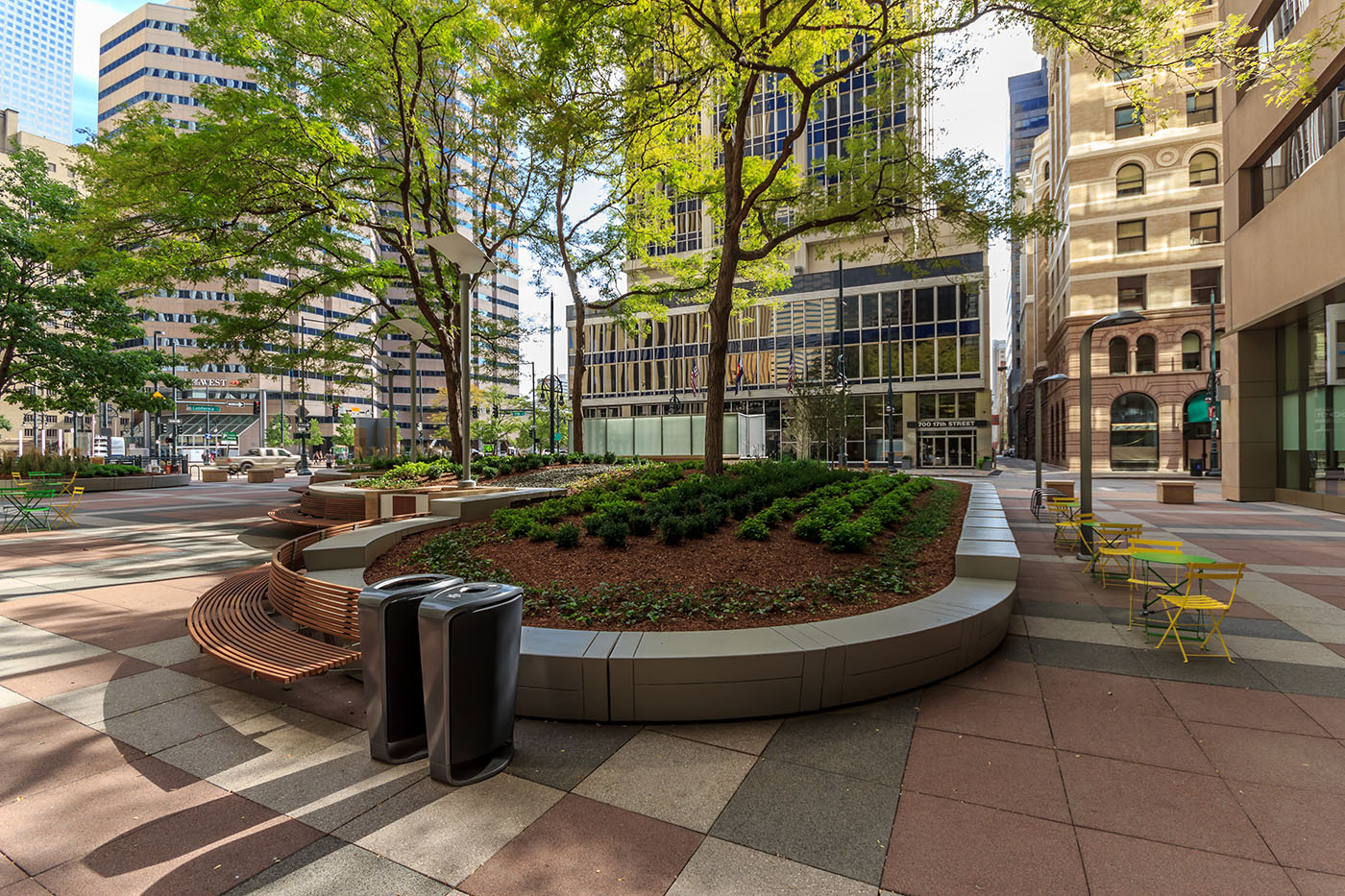 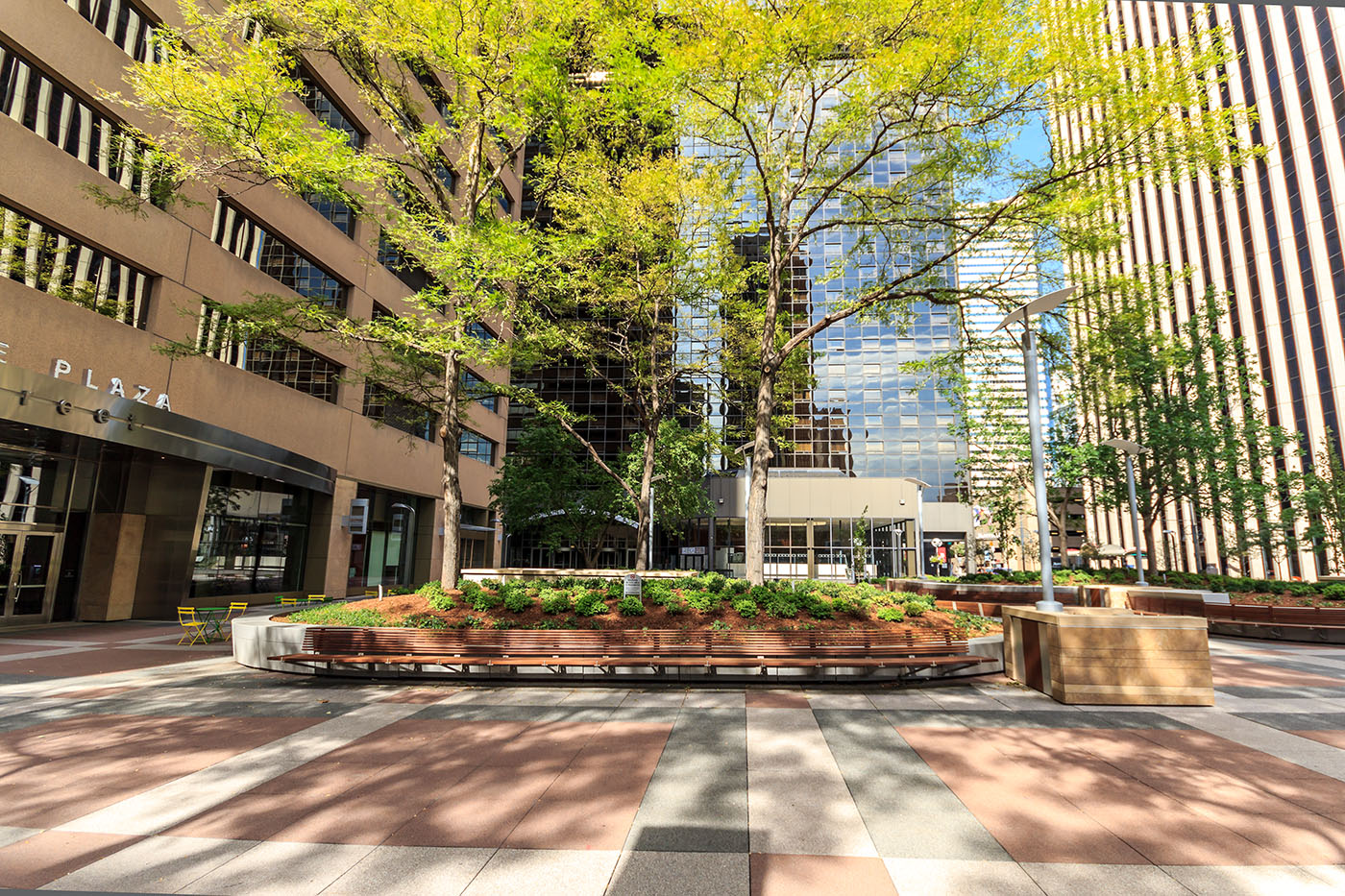 The landscaping is very well done with both plants and trees in each bulb. Also included on each side of the plaza is the Denver City Center Signage. 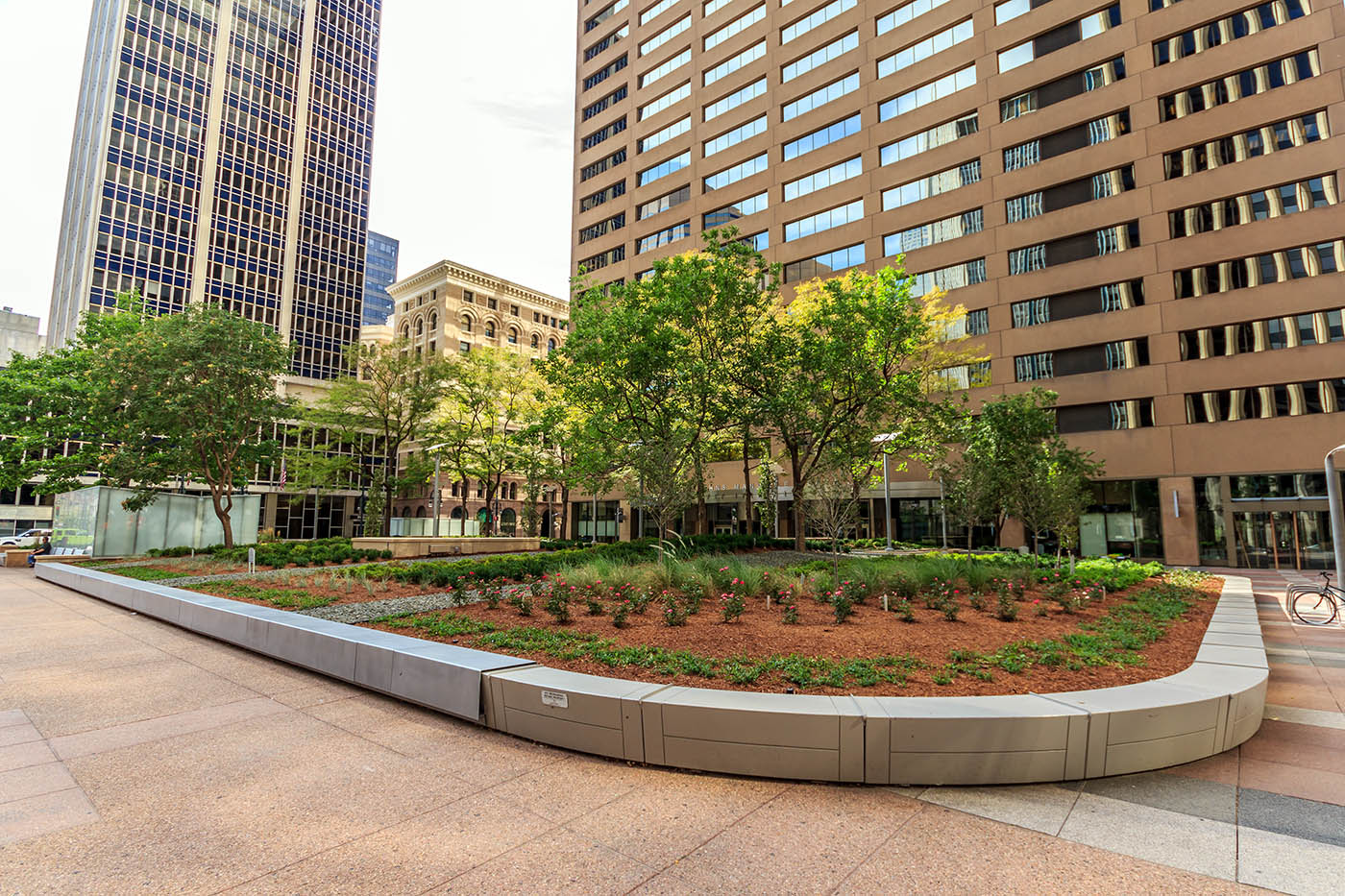 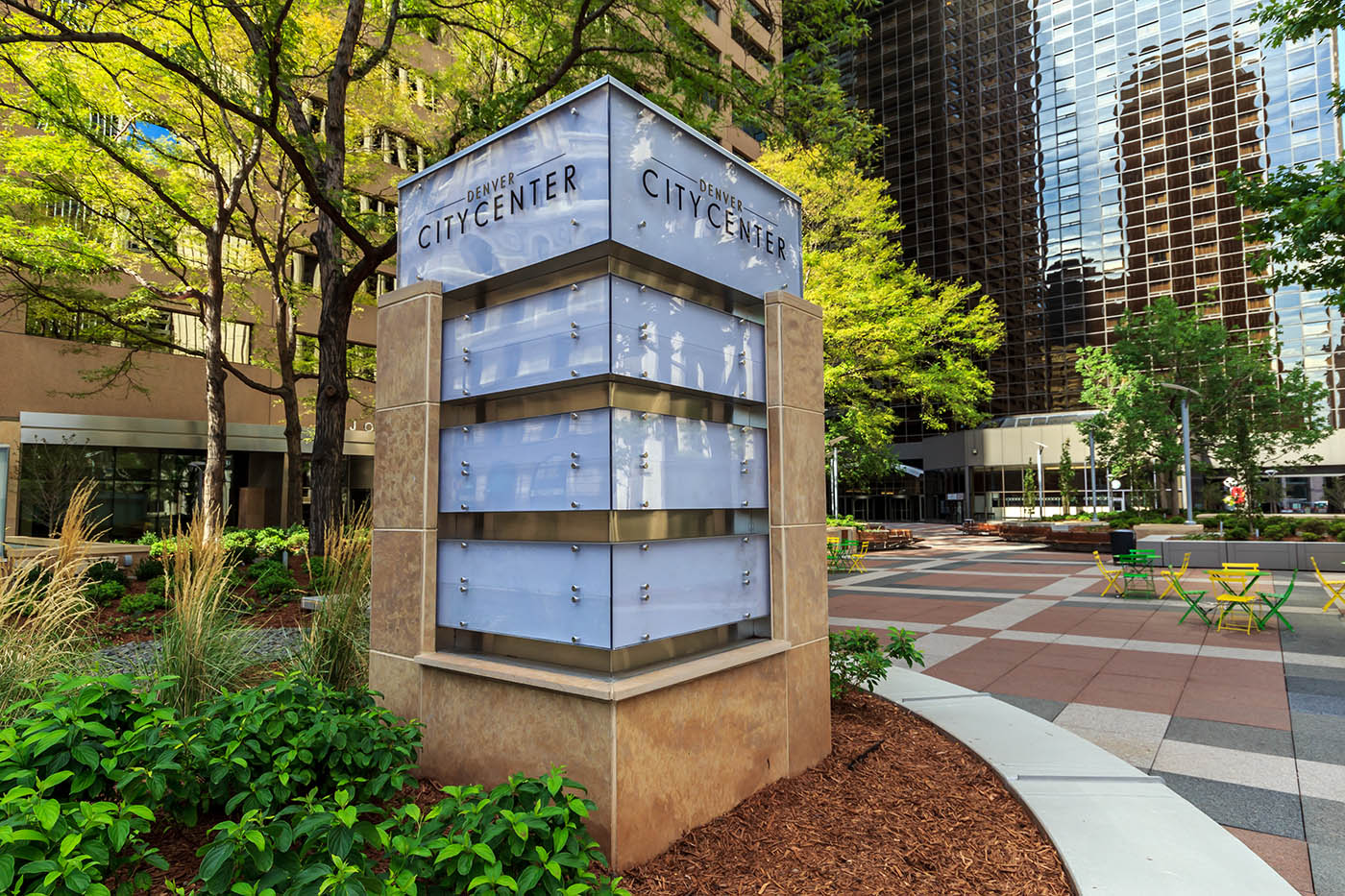 This plaza renovation is exactly what this part of Downtown Denver needed and we would all hope that it would help activate this area. Unfortunately, there is a major flaw with this plaza. Did you notice there was not one single person on the plaza even with a very busy hotel right on top of it? This is because we, as pedestrians and passersby, cannot use this plaza; it is not for public use. There is a sign, which can be missed, stating ‘Private Property, No Trespassing’. I was approached, as I was wrapping up my photo set, by a guard from Johns Manville Plaza saying it was in their ‘policy’ that I cannot take photos of the plaza. At this time, I had not seen the sign saying this was private property. Complying with his demands to move along, I put my camera away and decided to take a seat on a bench to enjoy the new look of the plaza. A few minutes later, I was approached by another guard, this time from 707 17th Street, saying I cannot be on the plaza unless I am a tenant of either two buildings. From then on, he watched me from the center of the plaza as I was taking pictures from the sidewalk to make sure I would not enter again. We have this wonderful plaza that is actually deactivating this block during non-business hours. What a shame, there is so much lost potential.