On Friday evening, September 23rd, 2011, BikeDenver inaugurated the new Washington Street bike lanes through West Washington Park.  This new southbound lane joins the northbound lane on Emerson Street to complete the couplet through West Washington Park.  The lanes stretch all the way from Louisiana on the South to Speer Blvd/Cherry Creek bike path on the north, making them the only north/south bike lanes between Lincoln and Colorado Blvd.  While East Denver has seen steady progress on east/west connectivity with bicycle lanes on 7th Avenue, 16th Avenue, 22nd Avenue and 31st/MLK Jr. Blvd., the north/south connections through East Denver have been sourly lacking.  The Washington/Emerson lanes are an important first step in bridging this gap and providing true connectivity to people on bicycles in East Denver.

City Council President Chris Nevitt welcomes about 40 cyclists who gathered to celebrate the opening of the Washington Street bike lane. 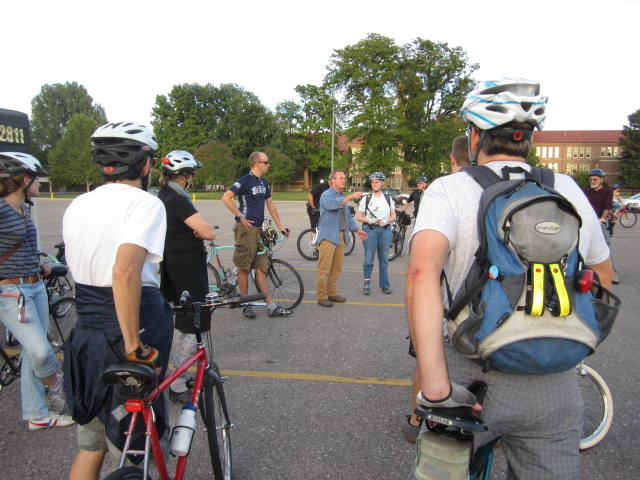 As I biked along the new Washington and Emerson bike lanes, I noticed something interesting; the bike lanes appear to improve the comfort level of motorists passing cyclists on these narrow streets.  Washington and Emerson are 30 feet wide, prior to the installation of the bike lanes, there was one traffic lane and two parking lanes.  This is still the configuration of these streets North of Speer in the Capital Hill neighborhood.  When motorists pass cyclists on this width of street without a bike lane, the motorists often feel nervous as exhibited by a pronounced shift to the left and then acceleration past the cyclist.  This movement is also unnerving to the person on the bicycle who can hear the car slow behind them and then gun it to pass them.  The whole scenario is stressful for both motorists and cyclists.

The photo below shows a motorist passing a cyclist on Washington Street just North of Speer. Note the distinct shift to the left by the car. 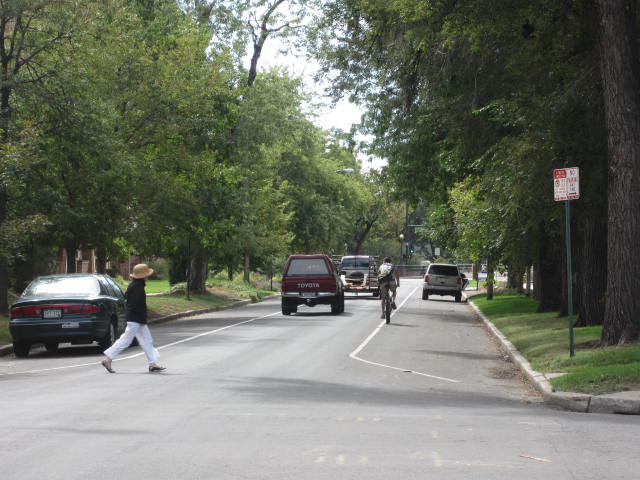 This is distinctly different from the experience on the newly stripped section of Washington Street south of Speer Blvd.  The street configuration is exactly the same except a bike lane has been added. Even though the automobile travel lane is now narrower than north of Speer Blvd, people in cars clearly feel more secure in passing cyclists because they can see the white line denoting how far to the right they can travel without being in the path of the person on the bicycle.  The abrupt shift to the left and the gunning of the engine to pass the cyclist is gone.  Both cars and bikes feel safer and behave in a safer manner on the newly configured Washington Street south of Speer Blvd.

The photo below shows the new bicycle lane on Washington Street. 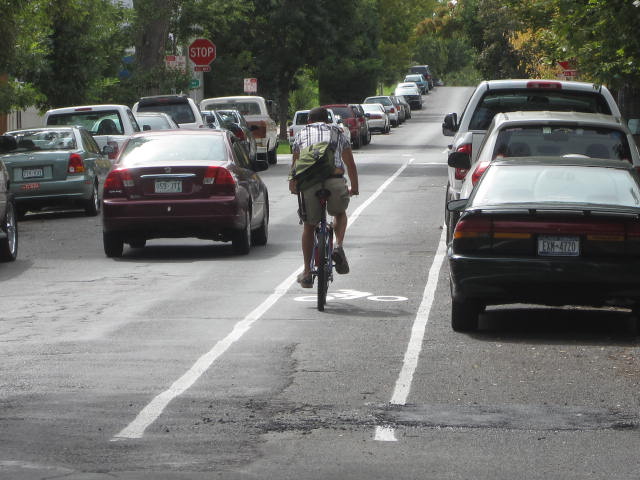 Now the challenge is to extend this new configuration north of Speer along Clarkson and Washington through Capital Hill, Uptown and into Five Points.  This would provide the best north/south connection in the city through the densest neighborhoods.  This is a perfect place to start building out the north/south network because the density of these neighborhoods makes them perfect for bicycling to work, entertainment, and errands.  I challenge the City of Denver to make this connection a priority in the near future. In the meantime, get out and enjoy the new bike lanes on Washington and Emerson. Going to Washington Park or the Whole Foods at I-25 and Washington? Leave your car at home and take the new bike lanes. They rock!

Thank you, Councilman Chris Nevitt, for your support in getting these lanes installed.