Let’s take a look at another improvement that’s part of the Better Denver Bond Program. Earlier, we reviewed plans for the corner of Colfax and Broadway (where there’s a construction fence up already). Today, we won’t venture too far away: just across Civic Center Park to Bannock and 14th Avenue. (Technically, this and the Colfax/Broadway improvements are part of the same project, but I decided to break it up into separate posts.)

Here’s a GoogleEarth image with an overlay I created showing the proposed improvements, based on the latest drawings I could find on the project. The black line represents the curb, and the white and yellow lines represent various pavement markings for bikes lanes, pedestrian crossings, and traffic lanes. (Click, then zoom, to view at full size.) 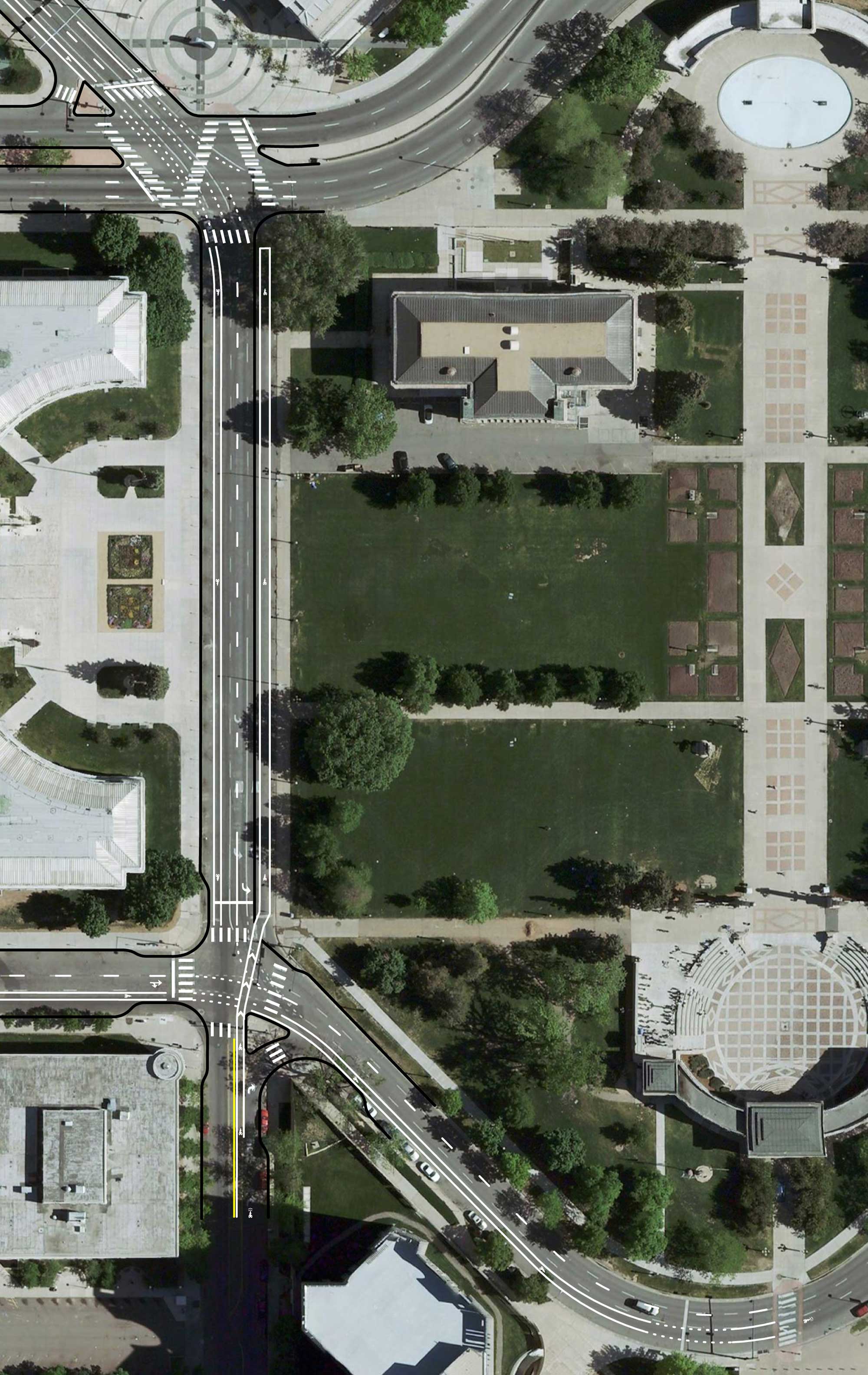 The new cross-section between the curbs for the 1400 block of Bannock will be (from west to east): 1.) parking lane, 2.) southbound striped  bike lane, 3.) southbound traffic lane that becomes the through-lane to the 1300 block, and 4.) southbound traffic lane that becomes a left-turn-only lane onto eastbound 14th Avenue. Then, in the reclaimed space from the removed parking lane, a new northbound cycle track will be incorporated into an expanded sidewalk. The northbound cycle track will be separated from the curb with a three-foot buffer and signage zone. Special pavement materials and markings will delineate the cycle track from the sidewalk. On the 1300 block of Bannock, a new striped northbound bicycle lane will begin just south of 14th Avenue that will traverse the intersection and feed into the new cycle track on the 1400 block. For all you visual people out there, here’s a diagram from the project plans: 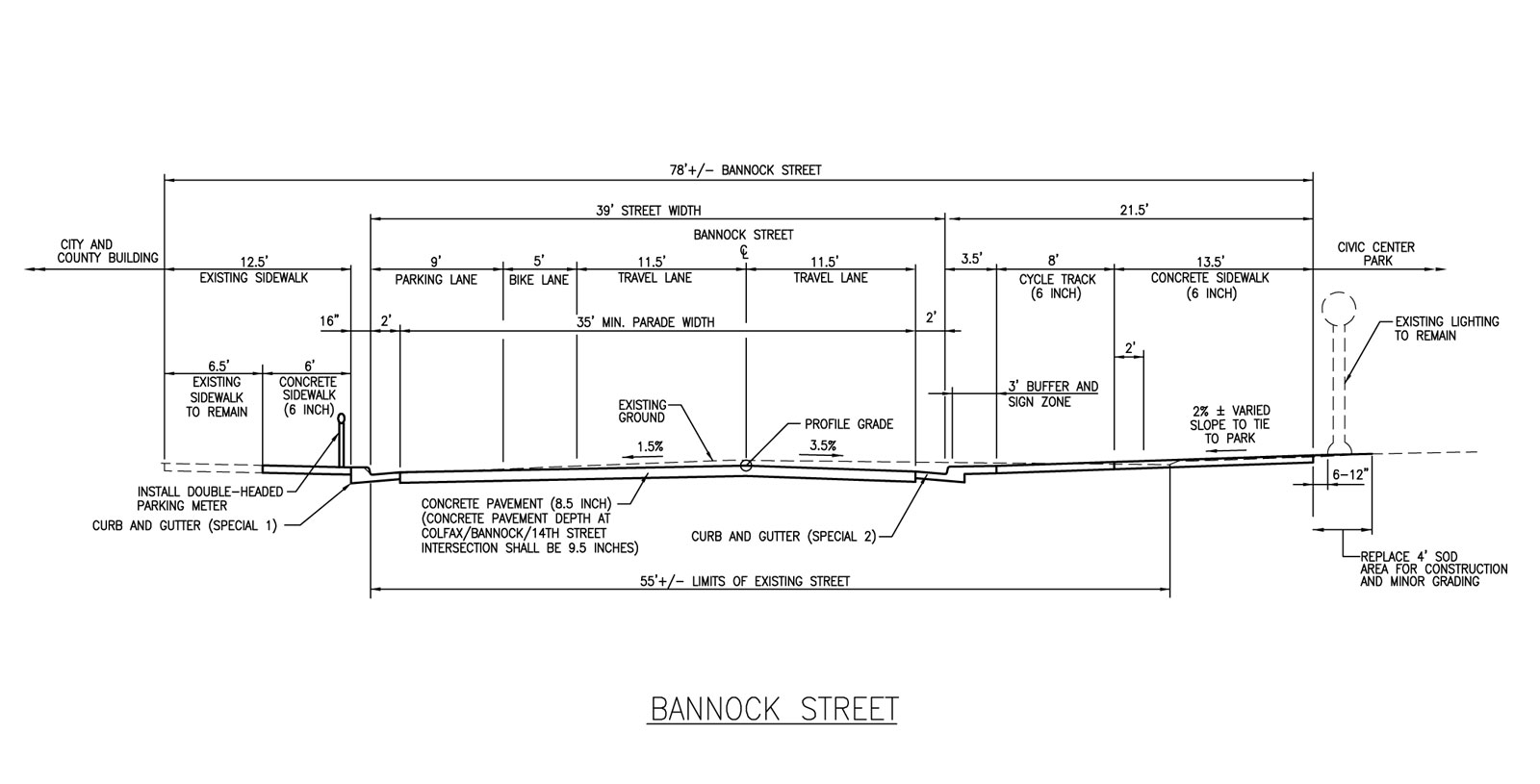 Here’s an image I snagged from the Cycle Smart Dallas blog that I believe fairly represents the kind of cycle track improvement planned for the 1400 block of Bannock. Wikipedia can fill you in on all the distinctions and definitions of segregated bicycle facilities. 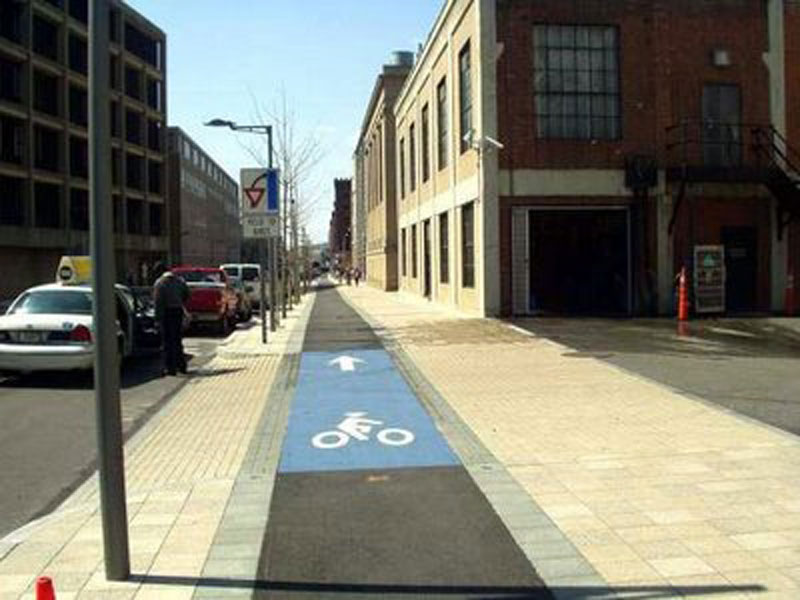 This new configuration for the 1400 block of Bannock works because of the reconstruction of 14th Street north of Colfax, where one traffic lane is being removed (yay!) and replaced with widened sidewalks and a striped bike lane. That new 14th Street bike lane will cross Colfax and become the new southbound striped bike lane on Bannock.

New bulb-outs are also planned for the 14th Avenue/Bannock intersection, parts of the 14th Street/Colfax/Bannock intersection and (not shown on my aerial image above) at 14th and Cherokee. Finally, this bond project also includes median improvements on Colfax from Galapago to Bannock that include new planters/landscaping and monuments.