Denver Public Works is in the final stages of implementing a major new east-west bicycle connection through Northwest Denver. Stretching about 2.3 miles from Sheridan Boulevard to just past Central Street on the downtown street grid, the new West 29th Avenue/15th Street bike lanes make bicycling along the corridor a safer experience and provide a more equitable balance in the use of the public right-of-way between automobiles and bicycles. 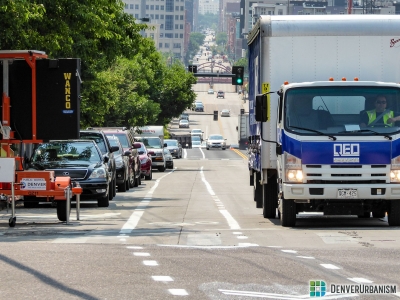 Along different segments of the corridor, the existing lane configurations were changed to accommodate the new bike lanes. For example, from Sheridan to Lowell, curbside parking was removed on one side of West 29th Avenue to make room to add the bike lanes. Between Lowell and Federal, enough space was freed up for the bike lanes by eliminating a center turn lane.

Between Federal and Speer, the former condition was a mess of travel lanes, turn lanes, and striped islands that made for a confusing drive for motorists and a daunting experience for bicyclists:

The previous condition of 29th Avenue between Federal and Speer included a confusing mess of travel and turn lanes. Source: Google Earth 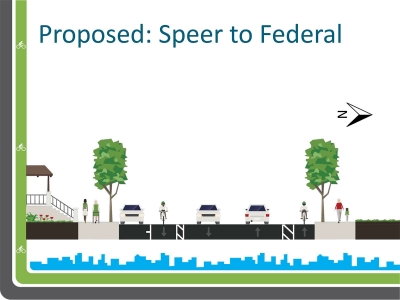 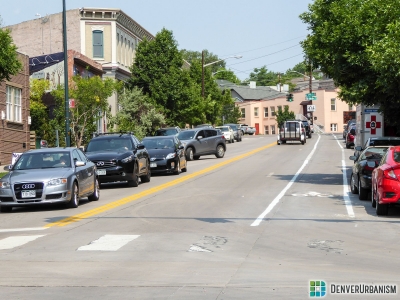 One northwest-bound travel lane and new bicycle lane on 15th Street between Central and Boulder streets.

Finally, an important lane reconfiguration that everyone needs to be aware of occurs on the 15th Street bridge over I-25. To transition from two northwest-bound lanes to one, the right lane on the bridge becomes a right-turn-only lane for Central Street: 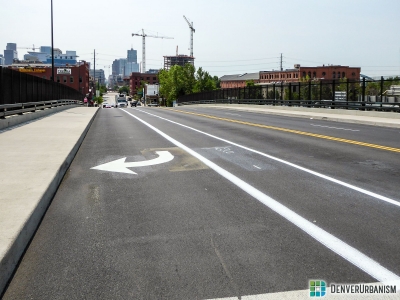 New lane configuration on the 15th Street bridge over Interstate 25.

To see maps and before-and-after diagrams of all of the different segments of this project, check out this presentation by Public Works from a November 2015 public meeting.

While this is a huge improvement for biking in Northwest Denver, there’s still the big gap in the bicycle network on 15th Street between Central Street and LoDo. That missing link is being studied by Public Works this year, so hopefully by the end of 2016 or early 2017, a design solution for providing a safe and convenient bicycle connection between Lower Highland and Lower Downtown will be identified.

The new West 29th Avenue/15th Street bicycle connection was a recommended project in the Denver Moves: Bicycles plan, and it is very exciting to see this and many other new bicycle infrastructure projects being implemented throughout the city. Thank you Denver Public Works!