Mr. Perrenoud was a Swiss native of French parentage. He immigrated to New York as a young man, and the Perrenoud family were Denver pioneers. They arrived in 1862 in a mule-drawn ambulance consigned for delivery to Roman Catholic Bishop Machebeauf.  They traveled for six weeks from Omaha to deliver the vehicle, which was used as both an ambulance and hearse. Mr. Perrenoud died on Jan. 3, 1900 at the age of 91 just 3 days after the death of his only son, Gustave, who was tragically killed by a runaway team of horses in New York City.

The three surviving daughters (R. Louise Perrenoud Fisher, Zelie Perrenoud Ruter, and Adele Perrenoud) moved into units 1A, 2B, and 2A respectively in 1902. Zelie’s husband, Charles Ruter, was primarily responsible for decisions regarding the design and construction of the Perrenoud. Charles was the executor of the Perrenoud Estate and also became manager of the Perrenoud Investment Company, meeting regularly with the architect, Frank Snell, and consulting with the sisters to select finish items. Charles managed the Perrenoud until his death in 1910.  Zelie followed Charles in death in 1913 at the age of 68.

The two remaining sisters managed the apartments until 1922 when they sold the building.   Although it changed hands many times from 1922 until 1949, the building’s use remained residential apartments.  In 1949, the residents purchased the building from the National Farmers Union Life Association in order to save it from becoming an office building. It became the first and one of Denver’s rare coops, and in 1986 became condominiums.

Here is an image of The Perrenoud Apartments, courtesy of Doors Open Denver. 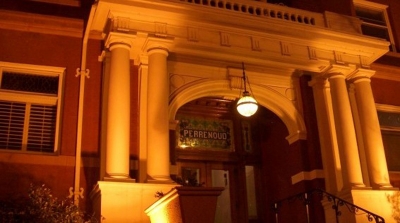 When the building first opened it was run much like a private club.  The lower level contained a kitchen with a full time chef, a dining room, a ballroom, and a staffed laundry.  Each unit had its own dumbwaiter and residents could have food sent directly to their own apartment.  Maid’s quarters were located in the attic. They still remain today and are used for storage.  Servants could come and go from the attic to the lower level and all floors in between to reach the backdoor of any apartment by means of 4 interior staircases not visible from the lobby. Now the dumbwaiters are gone, as is the kitchen.  The original dining room is used for meetings and the once spectacular ballroom is now used as an exercise facility.  On the lower level is an apartment for the use of our resident managers, as well as an archive gallery with much more in-depth information and photos about this amazing building and the family who built it.

The architectural style of the Perrenoud Apartments is an eclectic mix of classical elements. The somewhat austere exterior stands in contrast to an interior rich with decorative features. The 4 exceptional pieces of stained glass—the exterior entrance light, the window transom above the entrance, the fireplace glass front, and the magnificent atrium ceiling—are all original.

The Italian marble entry steps, elegant marble and French plate mirrored entry hall, mosaic tile floor and even the lobby furniture are all original. The date 1901 appears on all of the column plaster capitals. The birdcage elevator is original and the only functioning one of its type remaining in Denver.  The desk by the elevator was originally used as an internal switchboard whereby residents could call each other or call one of many service departments. Communication with the staff was also available through speaking tubes and call buttons in each apartment. The fireplace stone is translucent onyx.  The building originally had a combination of electric and gas lights. The building is divided into 6 separate wings so that each apartment is isolated from the rest and has windows on 3 sides.  Light corridors separate the wings.