The Source is housed in the 1880s Colorado Iron Works foundry, complete with its original massive steel crane and 60ft peaked ceilings. Visitors will notice soaring trusses overhead, natural light filtering in through clerestory windows, wide brick columns, and 5 newly-installed 18 foot-tall glass garage doors. Interior walls were constructed from steel studs spaced 4″ apart with the drywall left off. This gives a sense of permeability to the space, allowing visitors to experience its full scale while adding a gleaming silver counterpoint to the weathered brick shell. The walls rise 11 feet, leaving unobstructed much of the vertical clear space that is one of the building’s greatest amenities. Sections of the stud walls operate as large vertical doors for tenant bays, rolling straight up to reveal individual shops. Abundant graffiti left over from decades of disuse and abandonment adds color to both the building’s interior and exterior walls.

Other relics from the Source’s many former lives are also clearly visible throughout the space including old railroad ties imbedded in the brick. Marble wainscoting removed from the historic Colorado National Bank building at 17th and Champa during its recent renovation has found new life as tables and counters throughout the Source. Other common elements include ebonized maple bartops and banquettes, exposed ductwork, and brightly-colored graphics.

Here is an image of The Source, courtesy of Doors Open Denver. 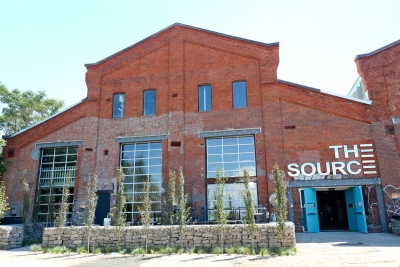 Among The Source’s 15 tenants are Acorn, a wood-fired restaurant and cocktail bar owned by the team behind Oak at Fourteenth; Comida, a modern Mexican taqueria; CapRock Farm Bar, a crafted cocktail and juice bar; and Babettes Artisan Breads, a traditional French bakery. In the Commissary Space of the building are Meathead, a butcher; Americanum Provisions, a specialty produce market; and floral shop Beet & Yarrow. Tenants also include SVPER ORDINARY, a design store and exhibit space; The Proper Pour, an independent wine and spirits bottle shop, and Crooked Stave Artisan Beer Project, a cultish brewery specializing in funky and sour beers. Also setting up shop at The Source are Boulder-based Boxcar Coffee Roasters and Mondo Market, a cheese, spice, and specialty food store. The Source offers a one-stop shopping experience for the food-obsessed while also providing some of Denver’s best artisans with an outlet for their crafts.

The openness of the building speaks to its community-oriented philosophy. It was repurposed under the guidance of architect Stephen Dynia with a strong commitment to preserving its industrial identity while adapting it for its current use. The industrial design with clear layers of new materials complementing the original shell conveys the integrity and edginess both of the tenants themselves and of this new marketplace.