The five-story brick building was designed by Frank E. Edbrooke, a leading Colorado architect who also designed the Brown Palace one year later. Listed on the National Register of Historic Places, the hotel was originally owned by Adolph Zang, whose Zang Brewing Company was the biggest producer of alcohol in the Rockies prior to Prohibition, and who recognized the need for a first-class hotel near Denver’s bustling Union Station.

Here is an image of the Oxford Hotel, courtesy of Doors Open Denver. 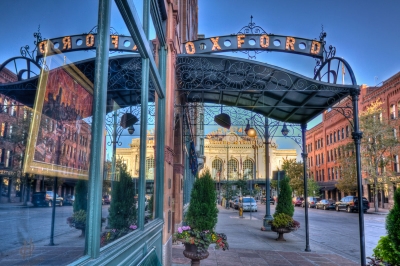 The Oxford’s stately lobby has long welcomed guests with its classic mix of antiques, marble and elegant furnishings and downtown Denver’s only fully functioning wood-burning fireplace. The stately hotel was designed in a U-shape with an interior light well. According to the Rocky Mountain News, when it opened in 1981, The Oxford sported the latest in technology, including its own power plant and bathrooms on each floor with separate water closets. The Oxford was truly a city within a city, offering its own dining room, barbershop, library, a pharmacy, a Western Union office, stables and a splendid saloon serving Zang’s “Fritz Imperial.” Another novelty was the elevator which the public called the “vertical railway” and which carried guests to the upper stories for bird’s eye views of the booming metropolis.

Today, The Oxford remains one of Colorado’s most famous hotels, earning a spot on Condé Nast Traveler’s 2014 Gold List as one of the “511 Best Places on Earth.”  Recently remodeled, the 80-room boutique hotel cleverly combines the opulence of the past with present-day comforts and convenience. On top of the extensive collection of Western American art, The Oxford’s popular Cruise Room—which oficially opened the day after the repeal of Prohibition in 1933—serves award-winning martinis in an Art Deco atmosphere. The hotel is also home to the Oxford Club, Spa & Salon, which offers a complete menu of relaxing spa services, a full service salon and a fitness center.