OZ is comprised of two historic warehouses turned studios side-by-side.  The vast open office, steel beams spanning the ceiling and exposed brick walls retain a historic feel while enclosing a modern space that sparks creativity.  OZ is an innovative architectural firm, and it truly shows when you visit our offices.

In 1895, William Albert Weigele, the proprietor of the Weigele Riveted Steele and Pipe Works, purchased Nos. 2949-51 Larimer Street, Denver.  It is assumed that William Albert Weigele built the warehouse structure (known at OZ as “Big Green”) and 3003 Larimer was also constructed under his supervision in the 1930s.

Here is an image of the OZ Architecture building, courtesy of Doors Open Denver. 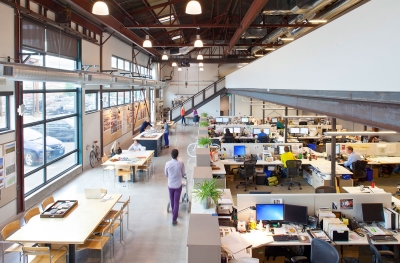 The buildings were later occupied in the 1940s by Thompson Pipe and Steel. They produced coated “spiral welded steel pipe” (very large diameter), but also built Destroyer Escort Ships during WW2.  They built the ships in large sections that could be shipped by rail through the Moffet Tunnel and were assembled in California.

Waste Management Recycling occupied the buildings in 1980-90s as a satellite station.  In 2000 Tom Sprung purchased the property and began phased construction.  The 3003 portion (built in the 1930s) of OZ and the building that houses the neighboring businesses, AFS and Lifescapes (originally built in 1907) were the first to be built out as office spaces in 2000.  “Big Green” was used as a warehouse for Sprung Construction until 2011 when it was renovated into a second office buiding for OZ’s Denver headquarters.