A local and national treasure, the Historic Elitch Theatre is located in the Highlands and has been an anchor to the 38th and Tennyson corridor on the edge of Berkeley for a 124 years. The theatre is one of the original buildings within the famous Elitch’s Zoological Gardens and Amusement Park. It exemplifies America resort architecture predominantly exhibited in great resort hotels. The building is constructed with a combination of stick and shingle style that is similar to two other well- known National Register of Historic Places in Colorado; the Stanley Hotel and the Chautauqua Auditorium. Through the years there have been additions and changes, but the main structure, housing the auditorium has retained its original structural form. It is octagonal in shape , rising two stories with a tent shaped shingle roof.  Above the central portion of the roof is a miniature version of the building which is crowned by an open look-out tower or belvedere, topped with a flag pole.  On opening day the roof was painted with geometric designs; stars, circles and semi-circles. In 1954, an addition of no architectural merit was added as a backstage building and is strictly utilitarian.

Here is an image of the Historic Elitch Gardens Theatre, courtesy of Doors Open Denver. 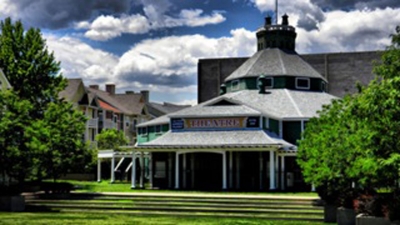 The theatre is the first woman-owned theatre in the country. Its bear pits were designed by Denver architects Charles Herbert Lee and Rudolph Liden. The National Register of Historic Places recognized the theatre for the significance it represents as a part of American architecture and the contribution it played to the theatrical world. Today, it still remains the longest running summer stock theatre in the nation were Hollywood notables graced its stage. Stars like early vaudeville sensation Harold Lloyd to the beautiful faces of Grace Kelly, Ginger Rogers, Lana Turner and the striking debonair of Douglas Fairbanks, Robert Redford and William Shatner are just a small representation of the hundreds of the Elitch Theatre alumnus.

The current Board of Directors of the non-profit Historic Elitch Gardens Theatre Foundation are proud to open the doors of the theatre as they begin Phase Three of restoration. The “Then and Now” theme will be well represented with entertainment, exhibits, displays and artifacts. The audience will walk away knowing that a breath of new life has come back to this iconic gem.