Located in the heart of Denver’s Lower Downtown district, the Historic Sugar building remains one of Denver’s great historic buildings. It was built in 1906 for the Great Western Sugar Company, designed by Gove and Walsh, the same architectural firm that designed Union Station. The design purposely served to showcase the company’s power and followed Chicago Architect Louis Sullivan’s style of creating buildings that form follows function. Similarly, at the end of the 1800s, Mayor Speer was pushing the ideals of City Beautiful—a historical city planning movement to make cities more attractive places in which to live and work—and drove business owners to have nice looking buildings constructed for their growing businesses. The architects incorporated these ideals into their design as well.

The finished Sugar Building stood four stories tall, constructed of buff brick and cream-colored terra cotta. These intricately woven geometrical and floral terracotta decorations and its arrangement of windows between vertical piers have been called Sullivanesque (named after the skyscraper ornamentation style of Louis Sullivan). Walsh and Gove used stock neoclassical-style pieces from the Denver terra cotta Company’s catalog to decorate the building’s facade instead of creating each piece from scratch. The completed building in 1906 also housed two Otis Elevators.

Here is an image of the Historic Sugar Building, courtesy of Doors Open Denver. 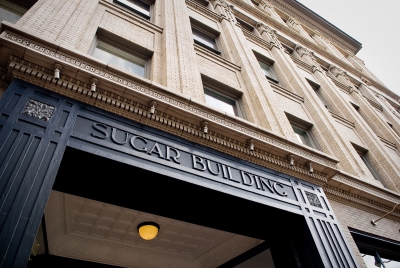 In 1912, another two stories were added as Great Western’s trade in sugar beets was growing to become the country’s largest. Upon completion the Great Western Sugar Company was housed in the building. As time passed, the building was eventually left empty for decades, but was later rehabbed in 1999 to house offices. The interior of the building was completely remodeled in 2000 with new lobby and common area finishes. The original iron cage Otis elevator also was refurbished and is still in use for passenger service. The interiors of the office floors were also remodeled with updated floor plans that offer both open floor plan and traditional office style layouts. The Sugar Factory building still stands in Denver’s historic Warehouse District as a beautiful reminder of the early 1900s architecture, and as a testament to the substantial influence of the Great Western Sugar Company on the economy of Colorado.