Construction on the Denver Paramount Theatre started in 1929, and it was completed in 1930. The Paramount is definitely a “Denver Classic, and was proclaimed by Temple Buell as the finest example of his work. The theatre serves as not only an excellent illustration of Art Deco design and craftsmanship, but as a tribute to an architect who made considerable contributions to Denver. Illustrative of this, the Paramount was listed on the National Register of Historic Places in 1980 and was declared a historic landmark by the City of Denver in 1988.

The facade is pre-cast concrete blocks enhanced by glazed terra cotta moldings, a striking contrast to the surrounding buildings. The ornate details above the windows and on the sills showcase a recurrent interior motif of rosettes, leaves, feather and fiddle-head ferns. Terra cotta decorative elements create the illusion of extra height for the three-story building. The interior represents an excellent example of “Zig Zag Art Deco” design, the fanciful and ornamental architectural expression popularized in the Jazz Age.

Here is an image of the Denver Paramount Theater, courtesy of Doors Open Denver. 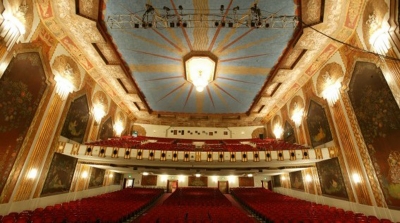 Originally designed for the silent films of the time, the building was also equipped with luxuries consistent with the golden age of film:  an ornamented lobby, indirect lighting, vaulted sunburst ceiling, cut-glass chandeliers, Egyptian lights, Italian marble and a neon marquee.  The colorful and dramatic false gold leafing, as well as copper and bronzing in the auditorium, frame silk murals created by renowned artist Vincent Mondo. Similarly, the theatre still houses its original Wurlitzer twin-console theatre pipe organ designed to produce varied sound effects for accompaniment to the silent picture show.  The organ remains one of the largest ever installed in the region and is joined by its sister in New York City’s Radio City Music Hall as one of only two remaining original Wurlitzer twin-console installations. The theatre has recently installed new carpet whose design is very close to the original 1930 carpet.