The Denver Fire Department Museum is located in Historic Fire Station No. 1, which was constructed in 1909 for Engine Company No. 1. The building was designed by Glen W. Huntington, a noted Denver architect, who also designed two other fire stations for the Department. The building originally housed men, fire equipment and the horses to pull them. Firemen ate and slept in dormitory rooms on the second floor, while equipment was kept on the ground floor and the horses stabled in the rear of the building.

In 1924, the building was updated to accommodate what had become an all-mechanized Department.  The main floor was redone using reinforced concrete to take the additional weight of engine-driven equipment, and the second floor hay loft was converted into a kitchen, locker room, men’s shower/restroom, and a Division Chief’s quarters. Unable to accommodate the arrival of larger and more specialized equipment, the station was decommissioned in 1974.  During the cold war of the 50s and 60s, the station’s basement was a designated fall-out shelter.  The Museum officially opened in 1980 and offers exhibits of vintage fire equipment; three hand-drawn pieces from the volunteer era, one horse-drawn steamer, and three mechanized pieces from 1923, 1942, and 1953.

Here is an image of the Denver Fire Department Museum, courtesy of Doors Open Denver. 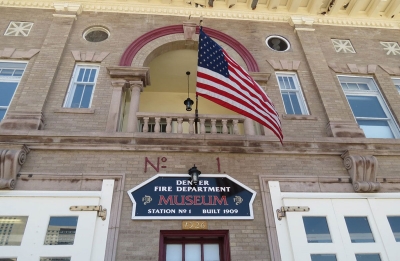 Recent restoration work funded by the State Historical Fund has returned the front exterior parapet to what it looked like when first built, and has restored the main stair case sky light to functional use again. The architecture is Beaux Arts vernacular, and the two large swinging doors on the front of the building came from a station that was torn down in the 1980s.  The original doors were bi-fold.