In 1971, the Museum opened what is now known as the North Building, designed by Italian architect Geo Ponti and Denver-based James Sudler Associates. The two-tower, seven-story building allowed the Museum to display its collections under one roof for the first time in 201,000 square feet. This architectural icon remains the only completed project in the United States by this important Italian master of modern design.

The North Building was an innovative move away from traditional, temple-style museum architecture. More than a million reflective glass tiles on the building’s exterior complement the dramatic windows and pierced roofline of the building’s castle-like facade. “Art is a treasure, and these thin but jealous walls defend it,” said Gio Ponti.

Here is an image of the North Building of the Denver Art Museum, courtesy of Doors Open Denver. 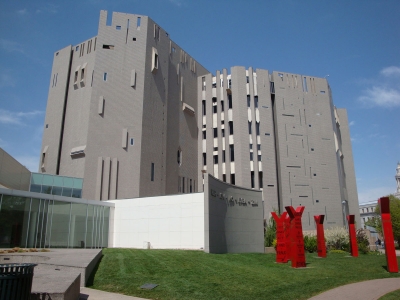 This bold architectural tradition continued with the Frederic C. Hamilton Building, situated directly south of the North Building, designed by architect Daniel Libeskind in association with Davis Partnership. The 146,000 square foot Hamilton Building opened to the public in October 2006, nearly doubling its former size. Libeskind’s dramatic design, referential to the North Building, recalls the peaks of the Rocky Mountains and geometric rock crystals found in the foothills near Denver. “I was inspired by the light and the geology of the Rockies, but most of all by the wide-open faces of the people of Denver,” says Libeskind. The building is covered in 9,000 titanium panels that reflect the Colorado sunshine.

Important works of art in their own right, the buildings by Ponti and Libeskind provide dynamic ways to experience the Museum’s extensive and diverse collection, which reflect the region and provides innovative ways for the community to experience cultures form around the world.