Located in the historic Five Points neighborhood, Denver Fire Department Station 3 was built and opened in 1931, making it the oldest Denver firehouse; it is also the smallest. The architect, C. Francis Pillsbury, designed the firehouse like a home in Spanish bungalow style. Pillsbury, who designed three other Denver fire stations and the State Capitol Annex Building‚ was a member of the City and County Building architectural team. (Denver Landmark Designation Application, page 2). The estimated cost of Station 3 was $10,000 (page 5). In 1994, the Denver Landmark Preservation Commission designated this building as historic landmark no. 235.

Fire Company 3 was established March 16, 1882 and originally located at 2600 Curtis.  In 1885 Firehouse #3 moved to 2563 Lincoln (Glenarm Place). This building still stands across from the present day Firehouse #3 and is privately owned.

After meeting with community leaders and businessmen who helped carry state-wide election, the City of Denver hired DFD’s first African American firefighters on March 13, 1892.  In 1893, the Denver Fire Department had founded a complete new crew comprised of African-American firefighters. The team was stationed at Station 3 with a white officer until August of 1897, when Lieutenant Silas Johnson was promoted to Captain and Driver McGruder was promoted to Lieutenant. These historic promotions occurred while Station 3 and the DFD were mourning the deaths of the entire Engine 3 crew who died in the line of duty when a floor collapsed into the basement at the infamous St. James Hotel Fire of March 23, 1895. Decades later, on July 17th, 1938, Engine 3 was covering into Station 5’s area for an emergency call.  They collided with Truck 4 who was responding to the Elitch’s fire, killing Captain George Brooks and Firefighter James Simspon.

Here is an image of the Denver Fire Department Station #3, courtesy of Doors Open Denver. 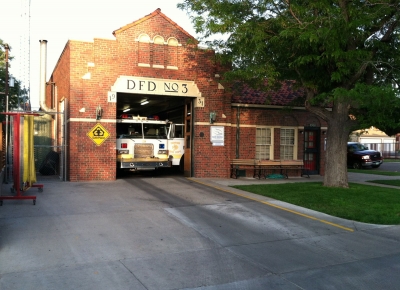 The Firehouse is reportedly haunted.  Several members working at Station 3 have experienced unexplainable events. Firefighters tell stories of experiences in the Firehouse such as hearing sweeping noises in the hallway, feeling a presence of someone standing over them in the dorm at night, doors and cabinets swinging open, footsteps in the hallway and the bay, lights flickering and the Station’s paper shredder turning on by itself. In 2013, ghost hunters visited the Firehouse after hearing of its haunted history and left with what some argue to be credible photos.

Station 3 became integrated in 1957 when Lieutenant Carl Rose was promoted and transferred into the Firehouse, ending the 60 years of an all African American fire company. Today, Engine 3 responds to over 3200 calls a year. In addition to participating in fire and emergency medical training and public education programs, the members conduct almost 500 fire inspections a year.  Fire Station 3’s motto is Pride of the Points. It has been a valued centerpiece for the historic neighborhood and a crew of four firefighters is on duty at all times, working 24-hour shifts. Visit DFD Station 3 during Doors Open Denver for guided tours, ghost stories, firefighter gear demonstrations, fire safety education and giveaway items!