Home to the world’s most intact public collection of major American artist, Clyfford Still, the Museum opened in November of 2011 to promote public and scholarly understanding of the life and work of Clyfford Still (1904-80). Considered one of the most important painters of the twentieth century, Still was among the first generation of Abstract Expressionist artists who developed a new, powerful approach to painting in the years following World War II.

Here is an image of the Clyfford Still Museum building, courtesy of Doors Open Denver. 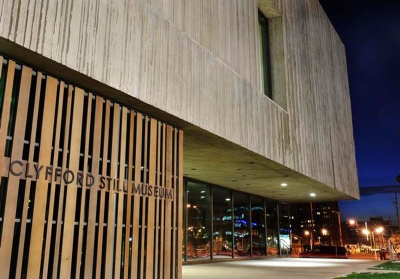 The Museum was designed by principal Brad Cloepfil of Allied Works Architecture, which received the 2013 Design Award, 2012 Honor Award, and 2012 Craftsmanship Award from the American Institute of Architects for the project. Cloepfil focused his attention not strictly on Still’s art but moreover on an understanding of Still’s background and upbringing as the only child of farmers. Still spent the first forty years of his life in the Northwest‚the extraordinary topographies of Washington State, the Columbia River Gorge, Alberta, Canada, and other regions where he resided until 1941. Born, raised, educated, and based in Portland, Oregon‚ Still was keenly familiar with these regions and their natural sensations, textures, and rhythms, and had built structures throughout Oregon, Washington, and Idaho.

The quality of light, not just in the galleries but in the entire building as a whole, is the essential characteristic of the museum, even more defining than the 4,000 cubic yards of textured concrete that Cloepfil cast into the earth. The evenly dispersed natural light that fills the exhibition rooms not only presents Still’s canvas surfaces in the most compelling and truthful way; the gentleness of the daylight also enlivens the senses as visitors move through the variously proportioned spaces. In Cloepfil’s design, processes, an emphasis on craft, and a sensitivity to light and material have replaced the flamboyant iconicity of many international architects.

Throughout Doors Open Denver the Museum presents A Single Form for a Single Artist, an exhibition of information and photographs from the Museum’s intricate construction prior to opening in November of 2011. A 45-minute guided tour of the Museum, offered free of charge and first-come first-served, will be presented on Saturday, April 25, at 1 p.m.