Built in 1889 the Shorter AME building is located on a unique setting, an “island” tract of land at the corner of 20th, Park Avenue, Washington Street and Cheyenne Place. At the time it was built, the building was one of the largest and most utilitarian in Denver. Accommodations for community activities included (at the time) the 3rd largest church in the city, a gym, electric organ, nursery, reading rooms, departmental rooms for all grades, pastor’s study, janitor’s quarters, and a kitchen built especially for large banquets.

When the Shorter congregation relocated, the building sat empty for a number of years until offering its use to Cleo Parker Robinson who, with the support of the City of Denver and local foundations, secured and renovated the historic Shorter A.M.E. Church in Denver’s Five Points neighborhood for her organization, the Cleo Parker Robinson Dance (CPRD). The CPRD converted the existing spaces into a 240-seat theatre, dance studios, amphitheater, and offices. The facility has also recently seen a three-story addition, and refurbishment to the theatre and studio spaces. Today, the facility is used for activities including concerts, lecture demonstrations, recitals, films, meetings, receptions and dance, comedy, poetry, and theater performances.

Here is an image of the Cleo Parker Robinson Dance building, courtesy of Doors Open Denver. 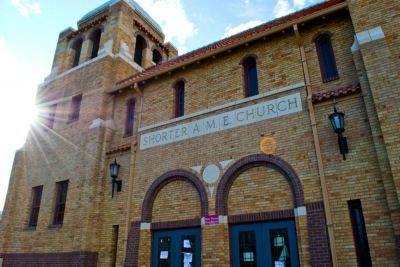 CPRD is an international, cross-cultural, dance-arts and educational institution rooted in African American traditions, and dedicated to excellence in providing instruction, performances and community programs, for intergenerational students, artists and audiences. The nearly 40-year-old oprganization is guided by a vision of dance as the universal language of movement that celebrates performance, individual expression, healing and peace which transforms the world into a sanctuary that transcends boundaries of culture, class and age. CPRD is committed to honoring diversity and inclusiveness throughout the global community, and reaches 20,000 students and 55,000 Denverites each year.