Balfour at Riverfront Park is a master planned, senior living community with a 17-acre park on one side and downtown Denver on the other. The building is an elegant retirement community designed by Robert A.M. Stern, which broke ground in April 2013 and opened in late 2014. It consists of 205 independent living, assisted living, and memory care/Alzheimer’s apartment homes based on the concept of continuum of care. This allows residents to maintain relationships with friends and staff through every level without having to leave the Balfour community, although its proximity to several of Denver’s attractions and amenities allow many opportunities for socializing and entertainment.

Here is an image of the Balfour at Riverfront Park and the historic Moffat Depot, courtesy of Doors Open Denver. 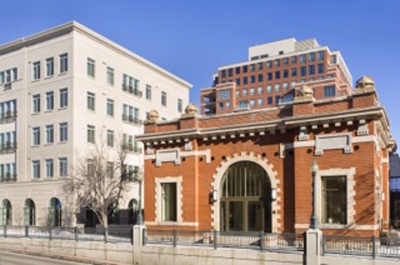 Within Balfour are three restaurants, as well as a spa, pool and fitness center. Balfour at Riverfront Park is built around one of Denver’s last two remaining historic train terminals, Moffat Depot. The Moffat Depot was the Denver terminus of the Denver Northwestern and Pacific Railroad. It represents the work of Denver Architect Edwin Moorman and provides an example of predominantly Georgian revival Architecture. The renovated Moffat Depot is now Balfour’s community room.