At the Downtown Denver Partnership’s October Member Forum, the DDP announced an exciting new project on Arapahoe Street. Following a few temporary projects on that street—and supporting the larger Denver Moves Plan—they will be implementing a permanent protected bike lane.

Here is an image of the prospective bike lane provided by Alta Planning + Design: 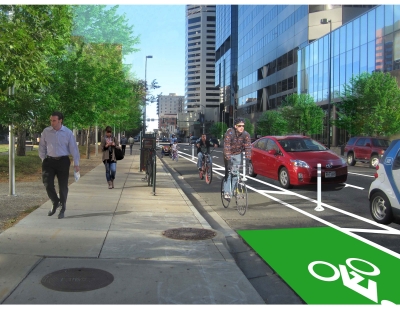 The lane will extend along Arapahoe from Broadway to Speer, and will serve as a vital bicycle avenue through downtown—and through a thriving business district. However, the most novel aspect of this project is not necessarily its design or planning, but its funding structure. The DDP already secured $85,000 from the Gates Family Foundation as well as $35,000 from the business community, but they have also initiated a crowdfunding campaign to cover the remaining $35,000 needed for the lane’s construction.

This crowdfunding structure for a large-scale public infrastructure project is the first of its kind here in Denver. It was originally inspired by a similar project in Memphis, TN that was very successful. Aside from the structure’s usefulness as an alternative revenue stream, its grassroots nature allows for a level of public involvement and ownership not typically available.

Many downtown businesses have already expressed strong interest in the proposed bike lane—evidenced by the initial $35,000 raised by the greater business community. The crowdfunding campaign is available here and will be open to contributions until December 12.

Aylene McCallum, Senior Manager of Transportation & Research at the Downtown Denver Partnership, commented that this structure will allow business owners as well as individuals to show the city that they want these resources. Planners often tout the phrase, “if we build it, they will come,” referring to such infrastructure projects. But this project’s crowdfunding structure turns that idea on its head. It puts the power into the hands of individuals and businesses, and says, “if we come together, they will build it.”

More and more, we’re experiencing the positive effects of protected bike lanes on cities and neighborhoods. They encourage healthy behaviors, mitigate pollution and congestion, and promote vibrant business communities, among other things. And this crowdfunding structure, if successful, will send a clear message to key decision makers: We want more urban bike infrastructure!

Peter Bird grew up around the country and, after completing his Bachelor’s degree in linguistics, moved abroad, living in Hungary and Estonia. It was there that he first developed a love for cities and the transportation patterns within them. He currently works for BikeDenver and is also pursuing a Master of Urban and Regional Planning degree from the University of Colorado Denver with a special interest in bicycle/pedestrian transportation planning.