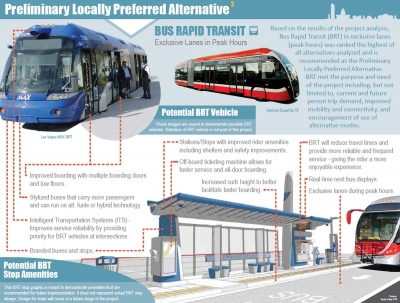 In keeping with the Denver Strategic Transportation Plan’s direction to use multimodal improvements to increase the person-trip capacity of our streets (a true multi-modal evaluation, rather than older methods counting vehicle capacity), this study used DRCOG’s Focus Travel Model, an activity-based demand model, to estimate total corridor person-trip demand under the remaining alternatives. By evaluating alternatives with an eye towards total corridor person-trip demand, and confirming that the proposed service can meet the demand generated by the new service, BRT demonstrates nearly all the capacity benefits of the streetcar alternative at approximately 25% of the capital cost and at lower operating cost.

The lower capital cost of the BRT alternative means that the project would be appropriate for federal Small Starts or New Starts funding (total capital costs of less than $250 million), which have relatively low local match requirements. The project team told attendees that the very good “cost effectiveness” for this alternative  – a number calculated based on an Federal Transit Administration formula for an all-inclusive cost per rider – shows that it would be highly competitive for federal funds, driven by the high ridership on the corridor.

A key feature of the BRT and streetcar alternatives is exclusive use of one lane in each direction during peak hours. This is critical to alleviating the unpredictable arrival times of buses on Colfax which today “bunch up” due to getting caught in traffic – a situation that would only get worse without the dedicated lanes as traffic and demand increase over time. The modeling estimates that daily transit demand would only increase from 22,000 today to 26,000 in 2035 with no action, or to 33,000 with an enhanced bus option in shared lanes. But transit ridership would increase to 43,000 per day under the BRT proposal with peak-hour exclusive lanes. (Streetcar with peak-hour exclusive lanes would be similar, with a small further increase due to slightly shorter end-to-end times and a passenger bias to use rail.)

Another way to look at the higher person-trip capacity on Colfax with these improvements is to realize that the demand for east-west travel will exist whether or not the improvements are made – but without the improvements, Colfax won’t be able to carry as much of it, meaning increased traffic in adjacent neighborhoods and less economic activity on Colfax.

Is it a bold proposal? I would say it’s a bold, smart proposal. It’s a bold proposal because it will take real political will, backed by the support of urbanists, to walk our multimodal talk and make choices such as peak-hour dedicated lanes to optimize for person-trip capacity on this key urban corridor. We cannot let our elected leaders become paralyzed with fear of offending those who only think about the world as a single-occupant-vehicle driver. It’s a smart proposal because it captures nearly all of the benefits possible at a reasonable price with a good shot at near-term funding.

This should be just the first in what becomes Denver’s new direction to lead on transit planning throughout the city.

Joel Noble is a Denver native who focuses on neighborhoods, transportation and city development topics through his many volunteer roles. He is President of Curtis Park Neighbors, Co-chair of the Inter-Neighborhood Cooperation‘s Transportation Committee, a Boardmember with the Five Points Business District (FPBD), and a member of the Denver Planning Board. He has been an active participant in developing area plans, business district plans, streetcar and transit plans, and in the citywide Zoning Code Update. Joel believes that there is great power in bringing community together with city departments and other agencies to develop vision and to implement plans for the future of our city. Professionally, Joel works in IT as a systems engineer.