Since the opening of the West Corridor Rail line in my neighborhood, I have been somewhat underwhelmed with how well it seems to be performing in terms of ridership. There are probably several reasons for this, but one of them that certainly plays a role is a lack of residential density along the line.

I recently read Vishaan Chakrabarti‘s book “A Country of Cities” in which he suggests that mass transit rail service is inefficient (i.e. it doesn’t attract enough ridership to pay for the cost of operation) at residential densities less than 30 dwelling units per acre (du/acre). Since it’s sort of difficult to imagine exactly what exactly 30 du/acre looks like,  I thought I’d see how my neighborhood compared.

The West Colfax Neighborhood of Denver, shown outlined in orange in the map below, covers 540 acres. The neighborhood is served by four light rail stations and nearly 75% of the neighborhood is within one-half mile of a station as shown by the larger circles on the map (thanks to DRCOG’s new Denver Regional Equity Atlas from which I took the image). Click on the map for the full-size version. 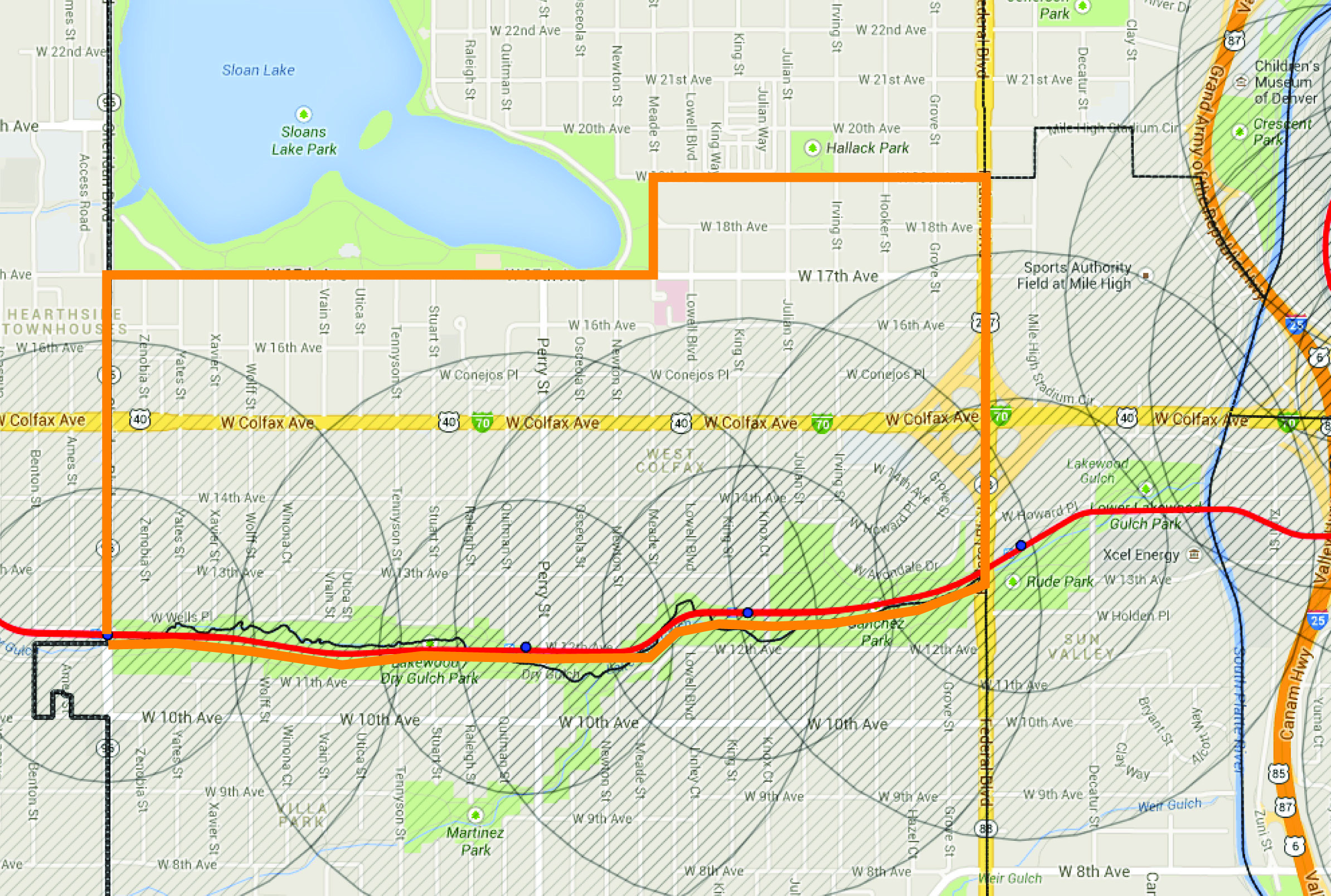 Currently there are approximately 3,600 dwelling units in the neighborhood. That means that on average there are only 6.6 dwelling units per acre. Sadly this isn’t anywhere close to Vishaan’s suggested density and probably has something to do with why I generally see a lot of mostly empty trains.

Of course I’m not one to take one person’s word as the gospel truth and I seemed to recall my urban planning professors in college quoting numbers closer to 20 du/acre, so I set out to see what sort of numbers I could find with a bit of web research. Sadly, I didn’t find many hard and fast numbers; the numbers I did find varied greatly. On the low end, a study by UC Berkeley’s Center For Future Urban Transit (PDF) suggested that light rail could be efficient between 9 and 12 du/acre depending on the size and strength of the Downtown market it served. Similarly, the LEED ND standards award credit for projects that are within a walking radius of mass transit AND contain 12 du/acre or more, suggesting that this might be an important threshold. The few other numbers I found  ranged upwards from 20 to 40 du/acre. Apparently, there isn’t a clear answer, and I imagine it’s because usage depends on a multitude of other factors.

So how do all these numbers stack up in relation to West Colfax? How many more units do we need before we can cross these thresholds?

Currently I’m aware of about 150 new units that are under construction in the neighborhood. Additionally, the redevelopment of St. Anthony’s Hospital will add somewhere between 800 and 1,200 units of residential housing. Combined, this will add between 950 and 1,350 dwelling units to the neighborhood. At the high end of this estimate, adding 1,350 units to the existing 3,600 units (and dividing by 540 acres) gives us approximately 9.2 du/acre. This is barely enough to cross the 9 du/acre threshold suggested in the UC Berkeley study. To get to the seemingly better 12 du/acre threshold, we’d have to add yet another 1,530 units of housing on top of what’s currently planned. To get to Vishaan’s suggested 30 du/acre, we’d need to add over 12,600 dwelling units to the neighborhood!

Currently, Capitol Hill is probably the densest neighborhood in Denver. The neighborhood (bounded by Broadway, Colfax, Downing and 7th Ave), which covers about 430 acres, had nearly 11,300 dwelling units back in 2000 or approximately 26.3 du/acre. I apologize for the old data; it’s what I had handy. The area is probably closer to 12,000 units by now. In any case, one would have to add the entire housing stock of Capitol Hill (and then some) to the West Colfax neighborhood to reach Vishaan’s 30 du/acre recommendation. That is an enormous amount of housing. While it’s probably not very realistic given the current status of land ownership and zoning allowances in the area, I guarantee it would help to fill all those trains.