According to the recently released results of the U.S. Census Bureau’s American Community Survey, Denver saw an impressive 20% increase in the numbers of people choosing bicycling as their primary way to commute to work in 2012. Bicycle commuter mode share rose from 2.6% of the population in 2011 to 2.9% of the population in 2012. The numbers are even more significant when looked at in the context of the past six years. In 2007, just 1.6% of the city’s population chose bicycling as their primary commuter mode. That number has steadily climbed every year to the point where we now see nearly 10,000 people bicycling to work each day in Denver. 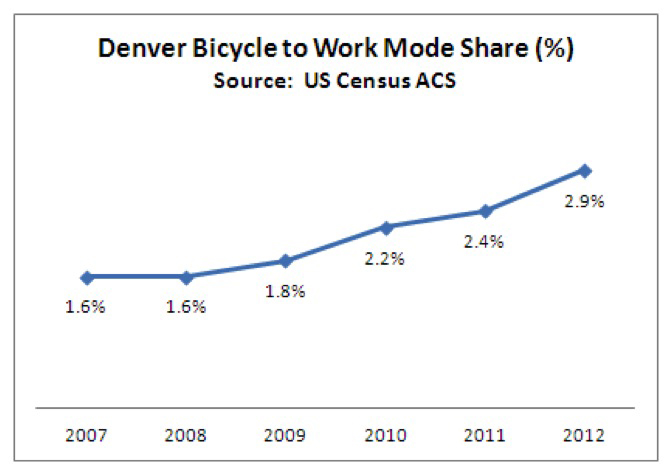 Denver’s increasing number of people choosing bicycles for transportation makes sense. The city has had more 25- to 35-year-olds migrate here than any other U.S. city and this demographic is increasingly choosing walking, biking and transit over automobiles for transportation.  We owe a great deal of this success to a progressive city leadership with a Mayor, City Council and key department managers endorsing multi-modal transportation. Denver’s city officials understand the importance of building a city that is sustainable, healthy, and multi-modal in nature. The opening of the 15th Street Bikeway in August is a tribute to this leadership. 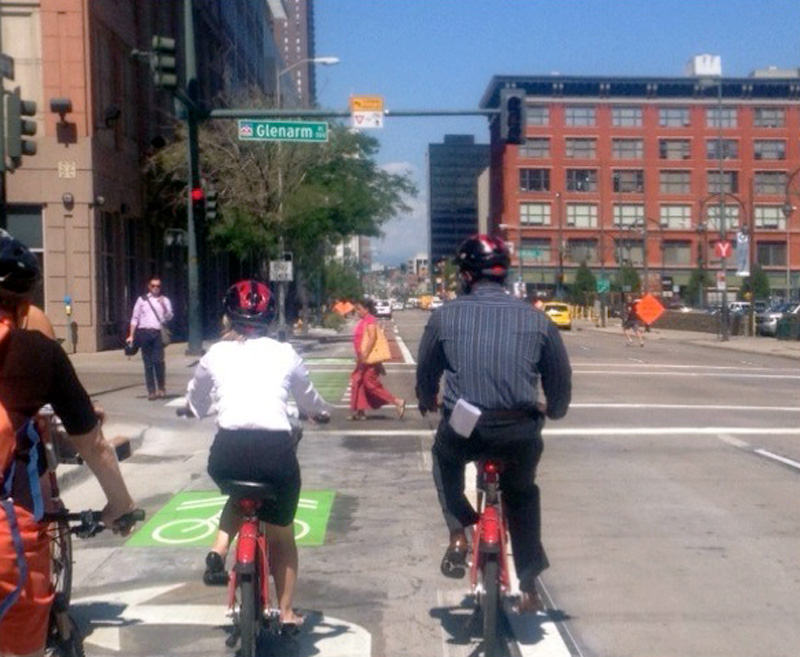 What Denver has done over the past 6 years is invest in multi-modal transportation infrastructure, steadily increasing the number bike lanes each year from 60 miles in 2007 to over 120 miles in 2013. The graph below shows that the increase in bicycle infrastructure investment correlates strongly with the increase in bicycle commuter mode share. For cities looking to diversify commuter mode share beyond the automobile, “Build it and they will come” has borne fruit. As in other cities around the world, Denver has found that building a safe, well-connected bicycle network encourages significantly greater numbers of people to commute on bicycles. 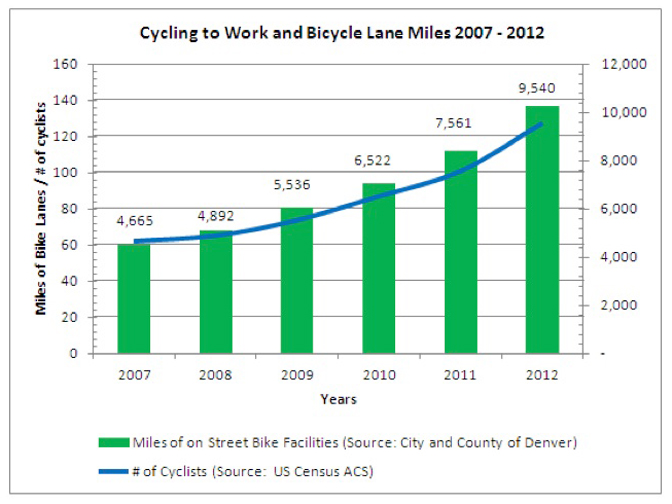 Over the next few weeks, City Council and the Mayor will work out the details of the 2014 city budget. Currently, the Mayor’s proposed budget includes 2.5 additional employees to work on the implementation of DenverMoves, the city’s plan for bicycle infrastructure connectivity. Denver’s City Council has also identified increasing bicycle and pedestrian infrastructure as a key budget priority for 2014. Under their leadership, we can expect the upward trend in people choosing healthy, sustainable modes of transportation to continue to rise in the Mile High City. This is a trend that will make Denver a healthier more livable city for current and future generations.