Foxx has the makings of a great Transportation Secretary 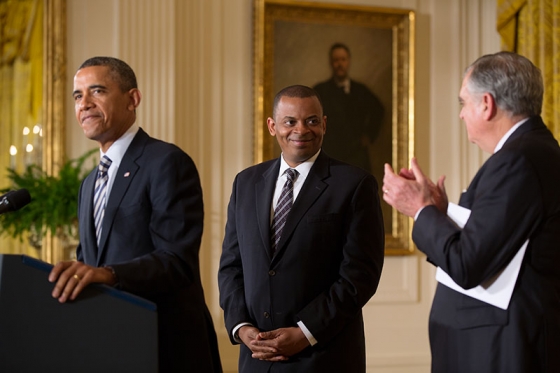 Earlier this week, President Obama nominated Charlotte Mayor Anthony Foxx as the next Secretary of Transportation. If Foxx’s experience in Charlotte is any indication, he’ll make a strong choice.

During his nomination press conference, Foxx said “cities have had no better friend” than the US Department of Transportation under outgoing Secretary Ray LaHood, and that if confirmed he would hope to “uphold the standards” LaHood set. That’s great news.

The fact that Foxx comes from a major central city is also a huge benefit. It means he understands urban needs, which aren’t just highways.

Charlotte may not be New York, but it’s made great strides in the right direction. The city’s first rail line opened a few years ago, and a streetcar line is under construction now. Charlotte also gained bronze-level status as a bike friendly community in 2008, and launched bikesharing in 2012.

Foxx has been a strong advocate for urban rail, especially streetcars. He knows transportation and land use are tied at the hip, and has fought repeated attacks on Charlotte’s streetcar by former Mayor and current North Carolina Governor Pat McCrory.

He’s also worked as an attorney for bus manufacturer DesignLine.

Foxx also knows that state Departments of Transportation can sometimes be part of the problem. At the federal level, it’s common for USDOT to delegate responsibilities and funding to state DOTs, under the assumption the states have a better understanding of local needs. But state DOTs aren’t any more local than any huge centralized government. And since they usually focus on highways, the result is that federal dollars mostly go to highways as well.

Since Foxx fought with the state over Charlotte’s streetcar, he knows that funneling everything through state DOTs means states hold the cards. He knows that can hurt cities.

Of course, no one can really predict what kind of Secretary Foxx will be. When progressive champion Ray LaHood was first tapped for the job, the blogosphere worried his history as a Republican from rural Illinois meant he’d be a status quo highway builder.

But we do know that Foxx has made a priority of building transit in his home city, and has had to fight to make it happen.