Last week I attended a meeting of City staff and bicycle community advocates to discuss possible tools for improving bicycle safety in Denver. The meeting focused on what kind of a campaign might be used to improve behavior among motorists, pedestrians and cyclists when sharing the roads and paths in hopes of increasing safety for all users. There was the usual discussion of people on bikes running red lights and people in cars driving too close to cyclists and people on bikes buzzing past people walking on the Cherry Creek path. As Denver continues to grow and more people choose walking and bicycling as a primary mode of transportation, these conflicts will also increase. So what to do?

First, there is a need for a “rules of the roads and paths” campaign. There is a lack of knowledge of how to properly ride, drive and walk on shared facilities. Walking a dog on an extended leash is no problem in most parks but on a shared use path it can be deadly for a cyclist. A person on a bike riding along at 20 mph on a street or on a bicycle-only path is fine but, for a pedestrian walking down a shared path, it can be terrifying to have something virtually silent fly by you without any warning, and simply opening your car door without looking can result in serious injury for a cyclist.  Thus, as our city becomes increasingly multi-modal, it also becomes increasingly important for everyone to know how to behave on shared facilities. An effective educational campaign through Public Safety and Bike Denver would be great.

Second, we need to look carefully at how our facility design influences behavior. Why do so many people run stop signals when riding bikes? Why doesn’t the constant flow of jay-walkers on our downtown streets result in the same degree of anger that bicyclists elicit when they ignore stop signals?  I believe the answer lies in the differences among the transportation modes and that designing facilities that acknowledge these differences will go a long way toward improving safety in our public realm.

To Illustrate this, I will look at two heavily used bicycle routes that access Downtown Denver from the east: 12th Avenue at Cheesman Park and 16th Avenue from York to Lincoln.

12th Avenue is a busy bicycle facility because it links neighborhoods as far east as Aurora with Downtown Denver through the most densely populated neighborhood in Denver, Capitol Hill. Two years ago, Denver Parks and Recreation completed an update to the path system through Cheesman Park. One of those updates was the addition of a 6-foot-wide cement walking path along 12th Avenue through the park. Since its installation, City Councilwoman Robb has received many complaints about bicyclists using the path instead of staying on the roadway. 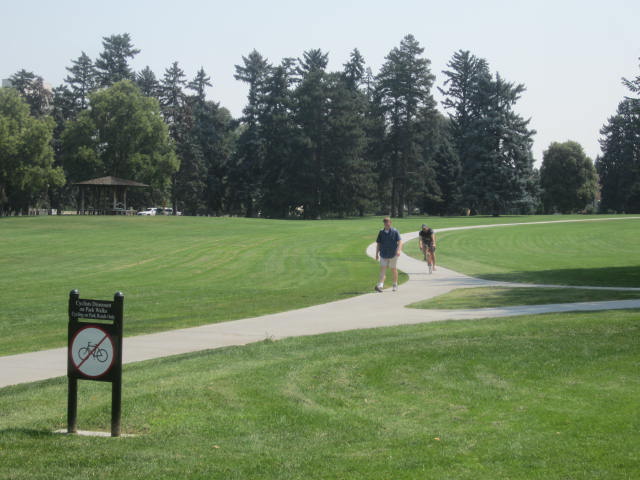 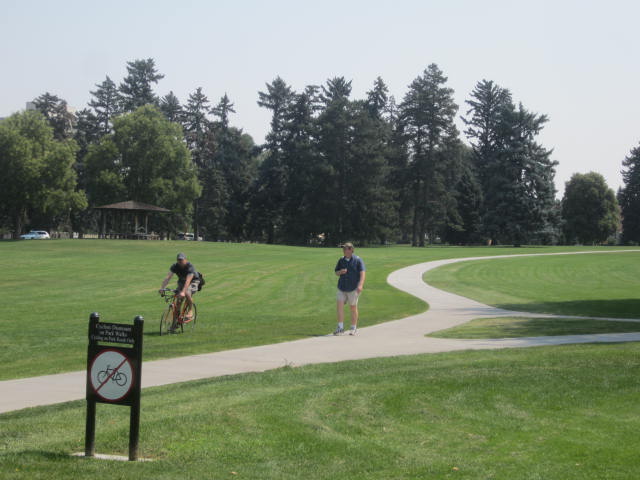 To address this concern, last year Parks and Recreation placed “Cyclists Dismount” signs at the east and west ends of the 12th Avenue sidewalk. 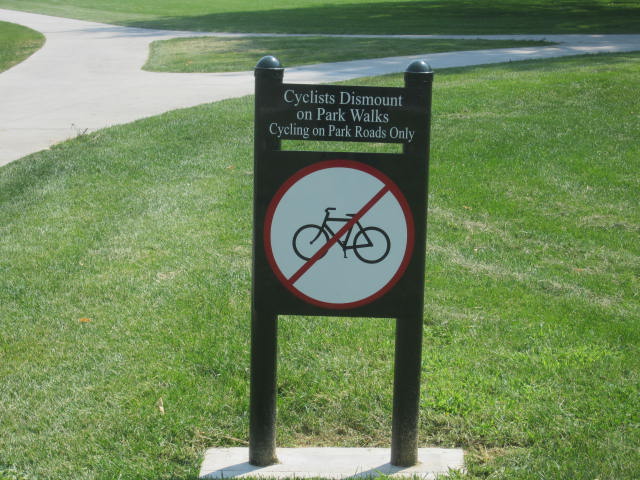 This has deterred some people on bicycles from using the path, but the issue has not gone away and recently there have been calls for increased patrols by the Volunteer Courtesy Bicycle Patrol to help address the issue.

In my view, this conflict is something that should have been addressed through design rather than signage and enforcement.  The use of 12th Avenue as a key bicycle route through the park was well known by Parks and Recreation when the new park design was created. In fact, the social path that ran across the park along 12th Avenue and inspired the new cement path was clearly carved by people bicycling and walking from 12th Avenue on the east side of the Park to 12th Avenue on the west side of the park. There were always bicycle tracks in the path and a consistent flow of people on bikes using the cut-through before the cement walk was installed. Knowing that 12th Avenue is a key bicycle route and knowing that bikes used the cut through should have resulted in the construction of a path wide enough to be shared by bicycles and pedestrians, such as that pictured below in Vancouver. 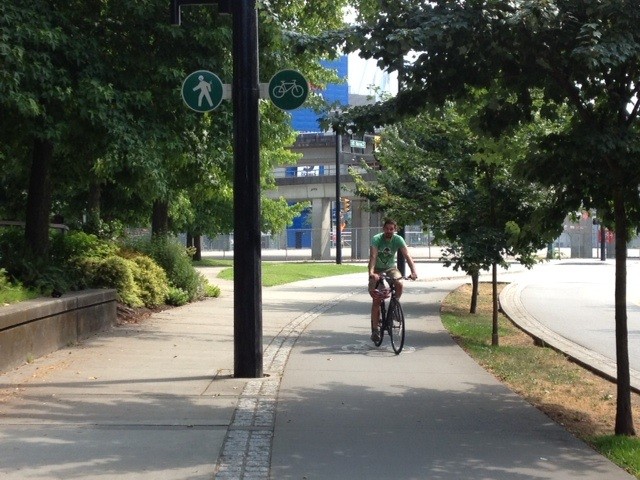 Designing facilities so that the most direct route is also the safe and sanctioned route is an essential part of improving safety and compliance with the law.

My next blog will look at 16th Avenue and how changes in design might increase compliance with traffic laws.