Nuclear power, the US, and Japan

Question: How might the disaster in Japan kill thousands of Americans? Answer: If anti-nuclear knee-jerk reactionaries are successful in using the Japanese tsunami as political leverage to scare Americans from investing in more nuclear power.

How so? Because every year 30,000 Americans die from causes related to coal power production. Thirty thousand. That’s more dead Americans every year than in the entire Revolutionary War. It’s five times as many dead Americans as the Iraq and Afghanistan Wars combined. It’s almost twice the 18,000 estimated Japanese dead from the tsunami disaster.

The longer we use coal instead of nuclear for the majority of our power generation in this country, the more Americans will die.

While we’re on the subject, let’s also talk about how dangerous the nuclear situation in Japan actually is. The chart below is a snippet from a much larger one comparing radiation doses received for a variety of events. Note that the additional radiation doses received by Japanese citizens in villages near the breaking-down nuclear plant average less than a normal day’s dose (which is to say, they’re getting less than twice the normal daily dose that you get simply by living on the surface of the Earth). They’re less than you get from a dental x-ray, and much less than you get by flying on a jet from New York to Los Angeles.

It’s true that a relatively small number of workers at the plant are getting much higher doses, but the danger to the mass population is quite low. Meanwhile, thousands of people around the world continue to die every day as a result of coal power production. Far more than will ever die as a result of nuclear radiation from any of these Japanese plants. The 30,000 American deaths per year attributed to coal average to more than 80 per day, which is nothing compared to the average of almost 1,400 per day from China’s half-million annual coal deaths.

I don’t mean to imply that we should treat nuclear power lightly. Of course the only reason it’s so safe is that tremendous safety measures are involved. We should absolutely learn from the disaster in Japan to improve safety however possible. But one thing we cannot afford to do is allow knee-jerk reactionaries to stop America from expanding our nuclear production capacity. The human toll of such narrow thinking would simply be too great. 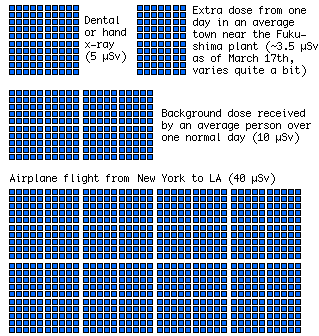 Radiation doses from a variety of sources.
Image from xkcd.com.