People on bicycle trying to get into Downtown from the south just got  help from Public Works. This summer, the city opened the first cycle track in Denver, which is defined by the degree of separation from other forms of traffic. Unlike a bike lane or buffered bike lane, a cycle track is separated from auto traffic by more than just paint. Usually the cycle track is curb-separated and at a slightly different grade than the road bed for automobiles. This is the case with Denver’s first cycle track, which runs along Bannock Street in front of the City and County Building.

The new cycle track on Bannock is marked by black pavement designed to blend with the historic Civic Center Park it borders. (click on images to enlarge) 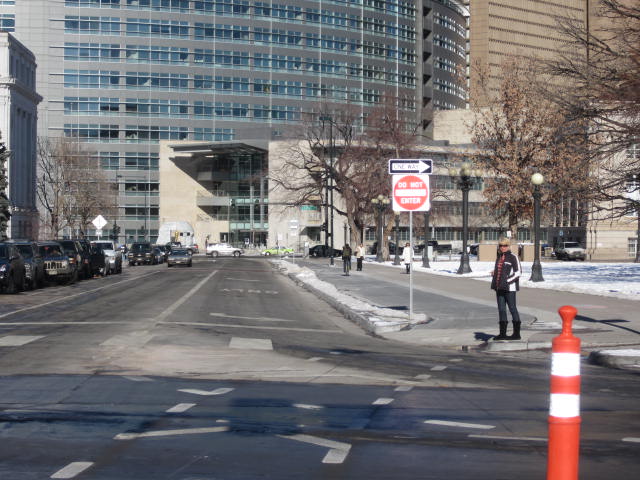 The North bound Bannock cycle track runs counter to the South bound one-way traffic on Bannock to provide access to Downtown Denver from the Golden Triangle / Capitol Hill neighborhoods. To make the movement work, Public Works added some innovative pavement treatments at the intersection of 14th Avenue and Bannock. From left to right: 1. Bike lane transition to the left. 2. Bike Box. 3. Intersection path across 14th Avenue. (click on images to enlarge)

The final improvement made to the corner is the installation of the city’s first bicycle-specific traffic signal. It’s essential at this intersection because the people on bicycles entering the cycle track are riding counter to oncoming traffic.  The signal clearly notes when it’s safe for northbound cyclists to enter the intersection and cars turning right onto 14th from Bannock now have a no-turn-on-red sign to prevent conflicts with turning cyclists. 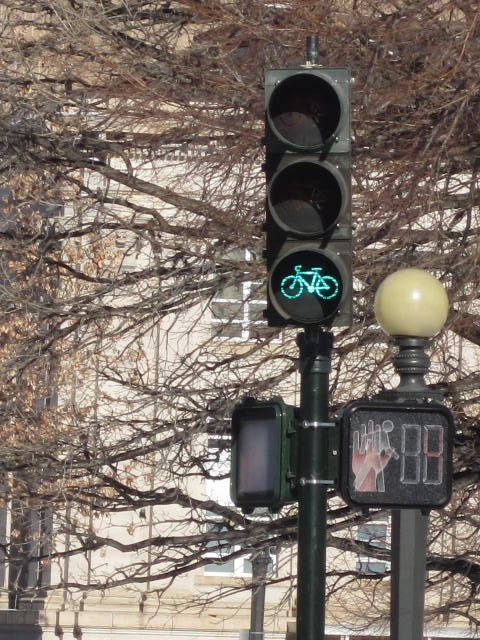 The new bike signal, intersection treatments, and cycle track represent a new level of complexity in bicycle-specific traffic design for Denver. As the city moves to make Downtown more accessible to people on bicycles, these kinds of treatments will be key. I hope that the city will be as innovative and forward thinking as they design the connection from the Bannock street cycle track across Colfax linking to the proposed cycle track on 15th Street through Downtown. This segment of the network is currently under study and should be installed in 2012.

In the meantime, I suggest  the following great bike ride in Downtown Denver. Ride up the new 14th street bike lane, and enjoy the views and streetscape of Denver’s just completed “Ambassador Street.” At Colfax, head south on the Bannock bike lane and visit the new Clyfford Still Museum at 13th and Bannock. When you’re done there, head back into Downtown on the new cycle track. With these great new investments, it’s clear that Denver really is on the right track! 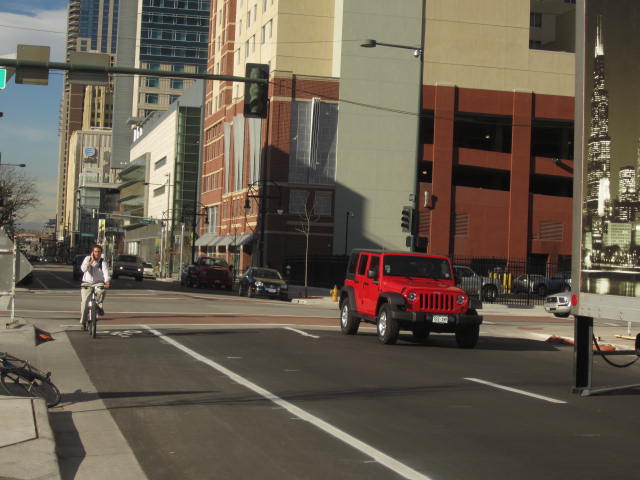