Denver Union Station serves as the 2015 headquarters for Doors Open Denver! The Station first opened in May 1881 as a central station combining four different rail operations, and was completed in 1914. It is now on the National Register of Historic Places, and serves as a centerpiece in the heart of downtown Denver as a multi-modal transportation hub, catalyst for transit-oriented private development, entertainment and social destination, and a historic architectural gem.

The two wing buildings (flanking the larger central structure) were built during different periods in its history. The original wings were built alongside the 1881 structure in a Romanesque Revival style, featuring tall, narrow windows, rusticated stonework, and motifs of columbines, Colorado’s state flower. The station was gutted by fire in 1894, and the facades of the wing buildings were incorporated into a renovation in 1914. The wings originally functioned as offices and other station facilities, and today house the Crawford Hotel, restaurants, and retailers. The central 1914 portion of the station contains the Great Hall, designed in the Beaux-Arts style and featuring elements such as multi-story arched windows and bays, terrazzo floors, a barrel vault spanning the entire width of the Great Hall, two exterior clocks, a metal canopy along the elevation of the structure, and other classical elements. Architectural detailing is evident on the station’s exterior facade, while the Great Hall (although its aesthetic adornments are comparatively simpler) has been designed to offer a highly pleasing and comfortable atmosphere for travelers and locals to relax, socialize, and enjoy themselves today.

Here is an image of the Denver Union Station Building, courtesy of Doors Open Denver: 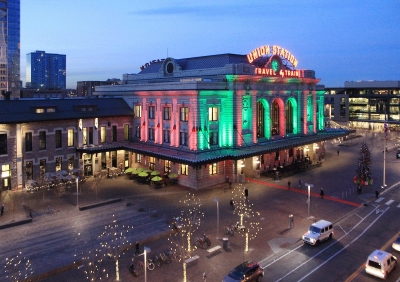 Also not to be missed are the 2000+ columbines that were hand carved around the windows and Great Hall, the historical floor and original tile, the ticket windows which now outline the Terminal Bar and the Great Hall ceiling, which was coated in a new high-tech acoustical technology, to reduce the echo in the historical building. Union Station also features art curated specifically from Colorado artists.

In total, the Denver Union Station, today, includes the historic terminal building, a train shed canopy, a 22-gate underground bus facility, and a light rail station. In 2012, it underwent a major redevelopment as the centerpiece of a new mixed-use development, and re-opened in 2014 with the addition of the Crawford Hotel, several restaurants and retailers, and a train hall, which stands immediately behind the historic building and houses tracks for Amtrak and future commuter rail lines (debuting in 2016). The underground bus terminal, accessible via multiple pavilions and replete with skylights to provide natural lighting, stretches west for two blocks along 17th Street and terminates at an above-ground light rail station. Transportation modalities are tied together above ground by various public spaces, plazas, and landscape elements

The Station’s restaurants and retailers include 10 exciting restaurants and three compelling retail outlets. The Great Hall of the station features a beer garden, ample seating and shuffle board tables as well as quick serve options MilkBox Ice Creamery, PigTrain Coffee, ACME Burger and Brat Corp., and Fresh eXchange wraps and salads. The Terminal Bar serves 30 Colorado craft beers and upstairs on the Union Station mezzanine is The Cooper Lounge, set as an above-ground, exclusive speakeasy. In the north and south wings of the historic building is the 112-room Crawford Hotel, ranked one of the top 101 new hotels around the world to be visited, as well as four Colorado-based restaurants: Mercantile Dining & Provision, Snooze an A.M. Eatery, Stoic & Genuine and The Kitchen Next Door. The previously mentioned retail selections include the popular Colorado bookstore Tattered Cover, as well as BLOOM and 5 green boxes offering gifts and accessories. Union Station hosts Amtrak, light rail, RTD and other passengers on a daily basis and in 2016, the light rail from DIA will connect Denver to the world.