It Is Time to Start Making Denver a City of Pedestrians

We’ve got to talk about walking in Denver. It’s dangerous, it’s oppressive, and it’s treated as an afterthought. You’ll laugh at my next words: “So I just came back from a two week vacation in Europe….” That’s how these things always start, right? Your friend tours some European capitals and now wants to upend the American way of life. I spent several days each in London, Paris, and Vienna. After coming back and seeing how incredibly easy it was to get around without a car in three different, bustling, global, modern cities I wasn’t surprised to be disappointed by my return to the kingdom of motordom.

Yesterday I got a haircut. My barber is down in the tech center while I work up in downtown but the trip is easy enough, a straight shot on the F Line down to Orchard Station. The first thing I noticed was that my train had been transformed into a billboard, a multi-billion dollar advertising platform, with obscured windows. It did not make me feel proud of our enormous investment in transit, and the ride was not improved by the blocked windows. On every train, bus, and even subway in Europe, the windows were never covered. Riders weren’t expected to put up with being enclosed in a darkened advertising platform, as if to say, “If you want dignity, get a car.” 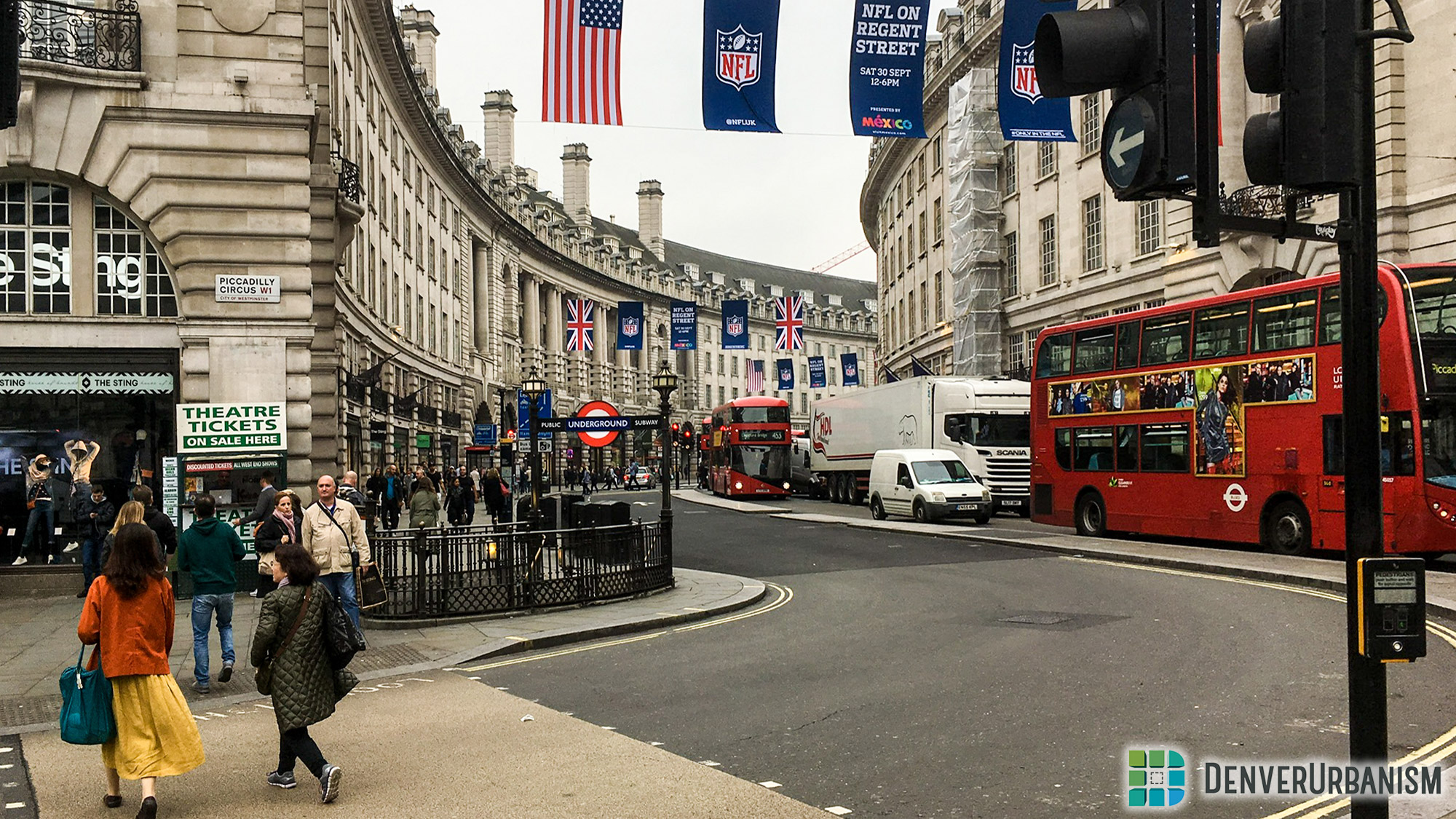 It was getting home that really convinced me though that Denver and RTD don’t do the minimum required to make walking a viable transportation option throughout the city. I’m not talking about making it easy or pleasant, I’m talking about practical. I live in Capitol Hill, so my phone told me to catch the next train going north and exit at the Louisiana-Pearl Station to catch the #12 bus. When I got off at Louisiana, I climbed the stairs from the highway-adjacent platform. Now, I’ve actually taken this trip before so I know where the connecting bus stop is, though it’s not obvious from the top of the stairs where you’re supposed to go.

In Europe, in completely unfamiliar cities, I was able to follow the large, clear, and helpful signs whenever I needed to make a transfer. Never once got lost. Denver? Not so much. But this time I knew where I was going and walked right over to the stop. I looked down the street for my bus. I checked my phone. Just missed it. The next one is scheduled to arrive in 25 minutes. One mistake and half an hour of your day is gone. You can do everything right and still be left in the lurch. That’s no way to run a transportation system that tens of thousands of people, indeed that the city as a whole, relies upon. 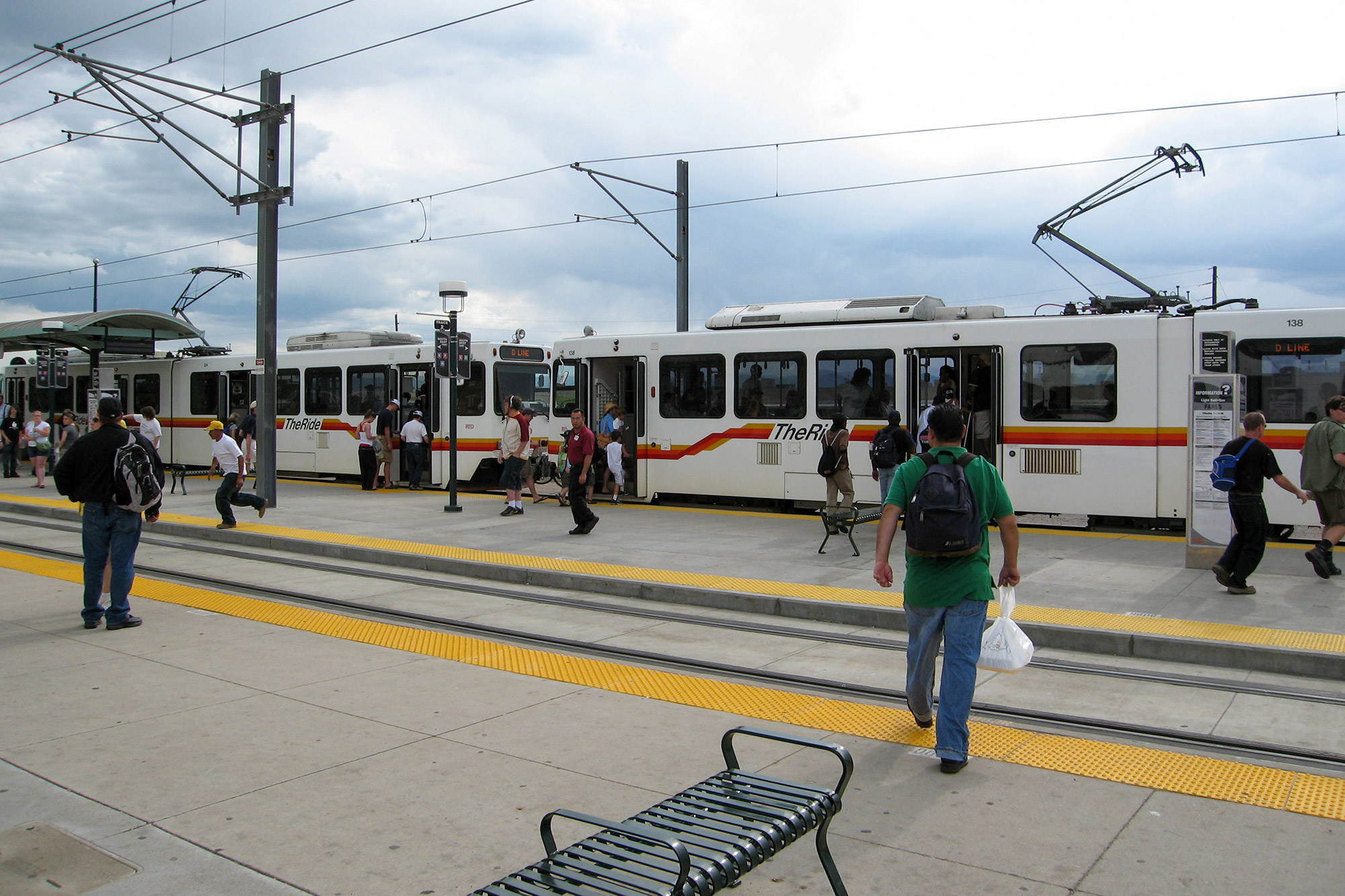 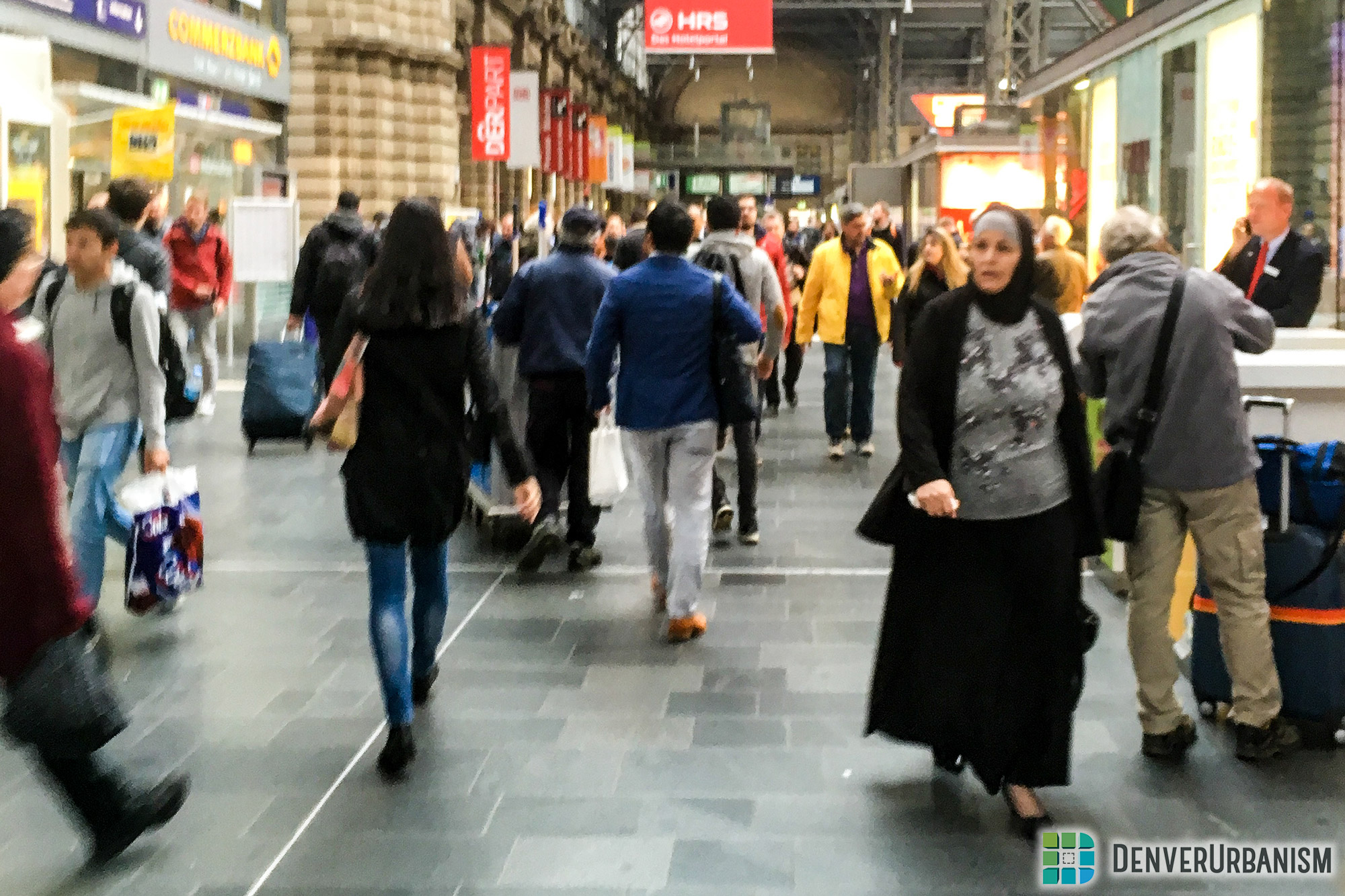 New plan. Back on the train to Broadway, take the #0 bus up Lincoln. I don’t know if you’ve ever visited the I-25 & Broadway station before, but calling it a “station” is a bit generous. I stepped off the train at 6:30 PM on a weekday and was greeted by a giant empty parking lot next to a noisy highway. It’s got zero amenities. No place to buy a drink or a snack. No place to sit with a cup of coffee. Just a few, and I mean few, lonely benches waiting in a sea of concrete for a bus to, hopefully, eventually, come and pick up the riders cursed with transferring there.

I had no idea where to go, and I knew that if I missed my bus it would be a long time before another showed up. I walked around and found a sign, much too out of the way for such a large station, telling me the correct gate. It didn’t tell me where the gate was, but at least I knew it existed. I went to wait. How is it that in a large and growing city we still have thirty-minute headways for buses which run on major arterials during peak travel times? For two weeks all I had to do was step outside my hotel room and I was on my way in five minutes. Didn’t matter where I was going. Bus or train, local or across town, direct or transfer. It was LIBERATING. I never once worried about getting somewhere, being late, or wasting my day while the transportation system struggled to function. 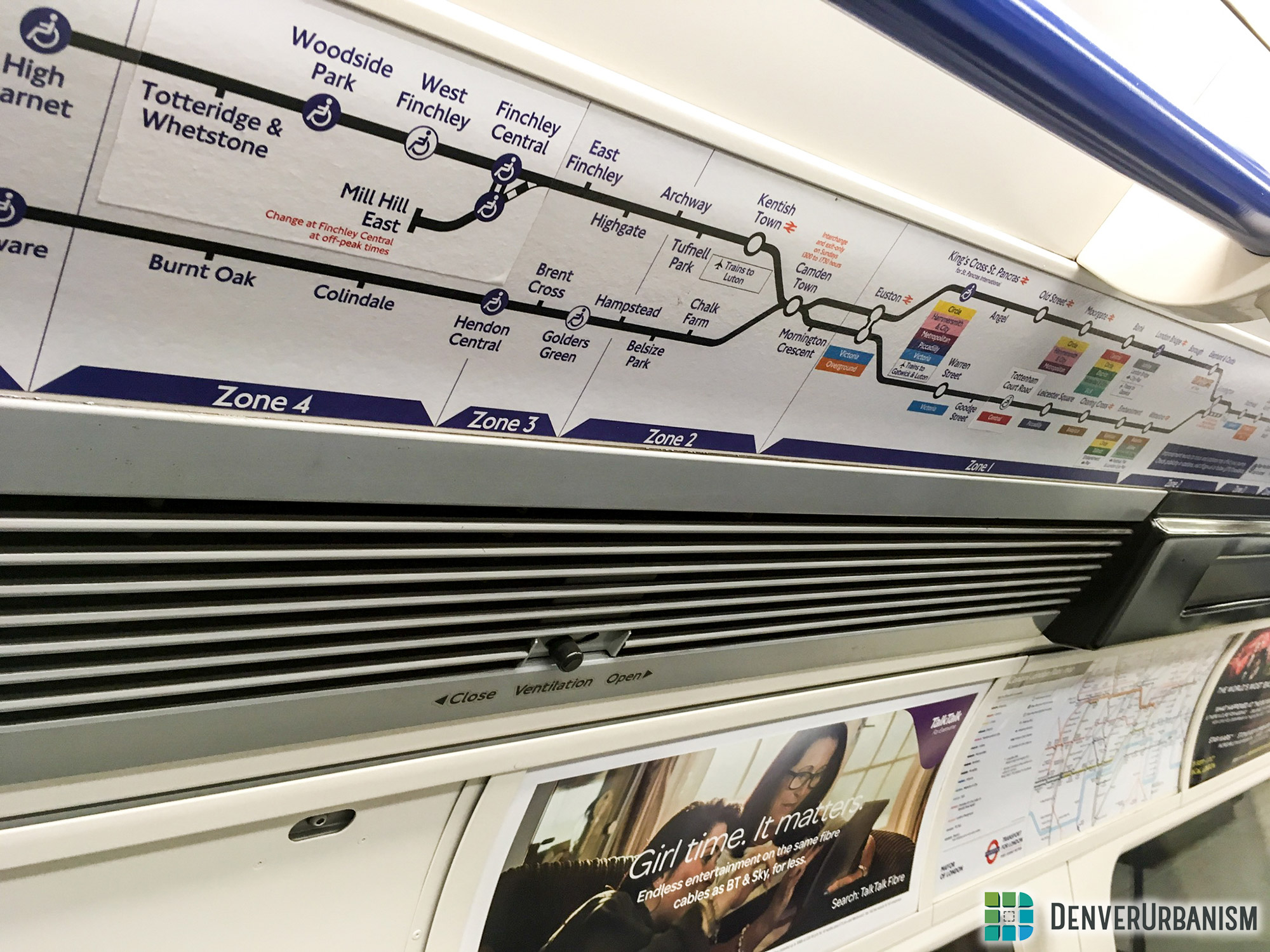 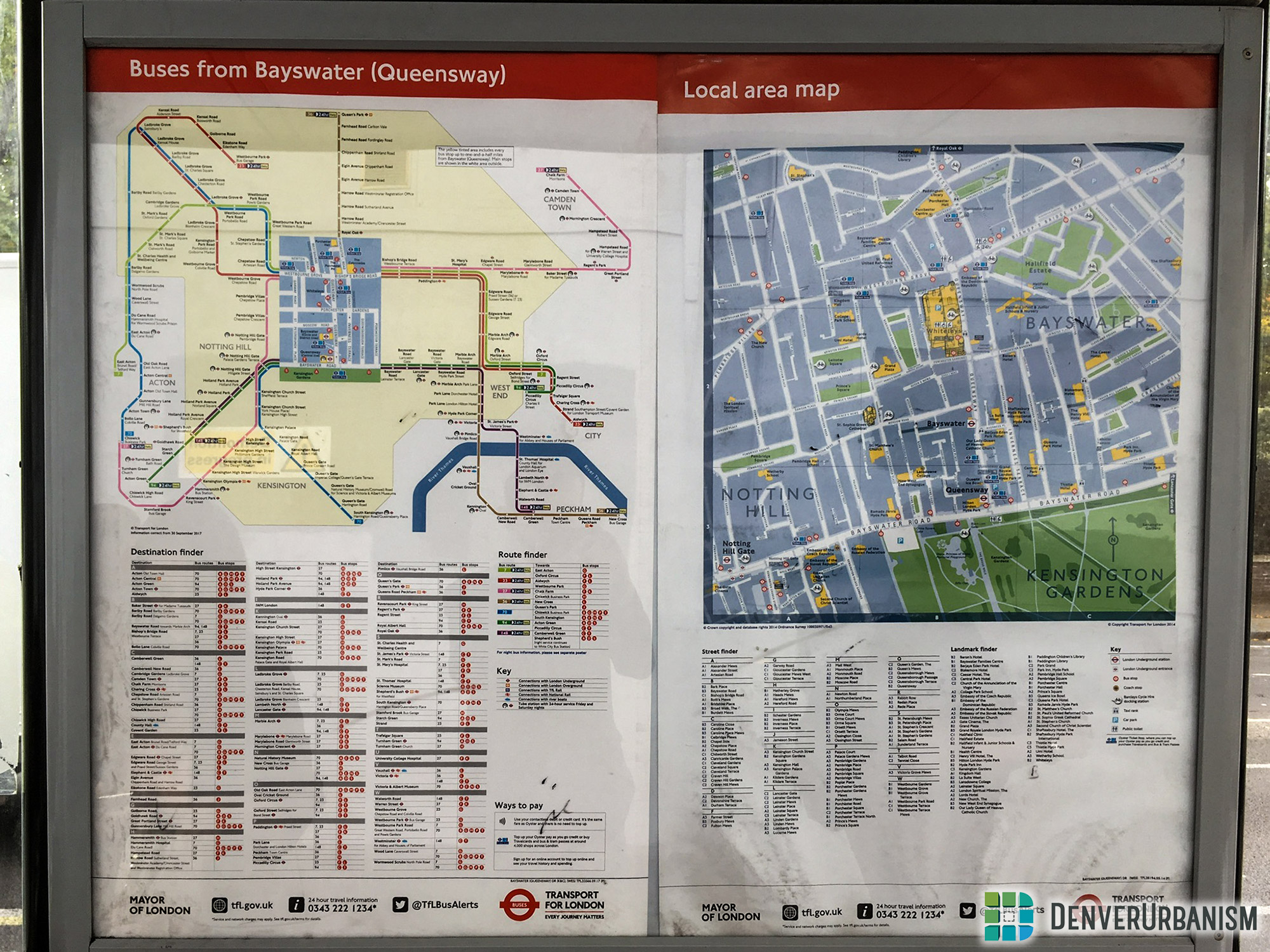 Finally got on my bus. Here’s where I noticed something else. While traveling through London, Paris, or Vienna, I would look out the window and see buildings, people, shops, life. While traveling through Denver I saw cars and parking lots. This is the city we’ve chosen to build. This is the city we present to our visitors. Parking lots. Wide roads filled with cars. People? Not so much. Buildings? Some, though often looking abandoned, battered by the force of traffic beating down their doors. Sometimes even physically turning their backs to the street, blank walls built as fortresses to keep out the noise and pollution. Depressing. Shops? Buried behind seas of empty cars, baking in the sun. Life? This is life?

But my story doesn’t end here. There’s still the walk from the bus stop to my home. At 9th and Grant, I was politely informed by a sign that the sidewalk was closed and that I should make two crossings, here and back at the end of the block. Let me tell you something: one time in London there was a sidewalk closure but no one was asked to cross any wide or busy intersections. There, a temporary sidewalk was provided where the street parking used to be. There were guard rails, there was high visibility paint on the curb, and there were honest-to-God flashing lights on the hand rails to warn motorists to watch out. Now that’s putting the safety and convenience of pedestrians front and center. 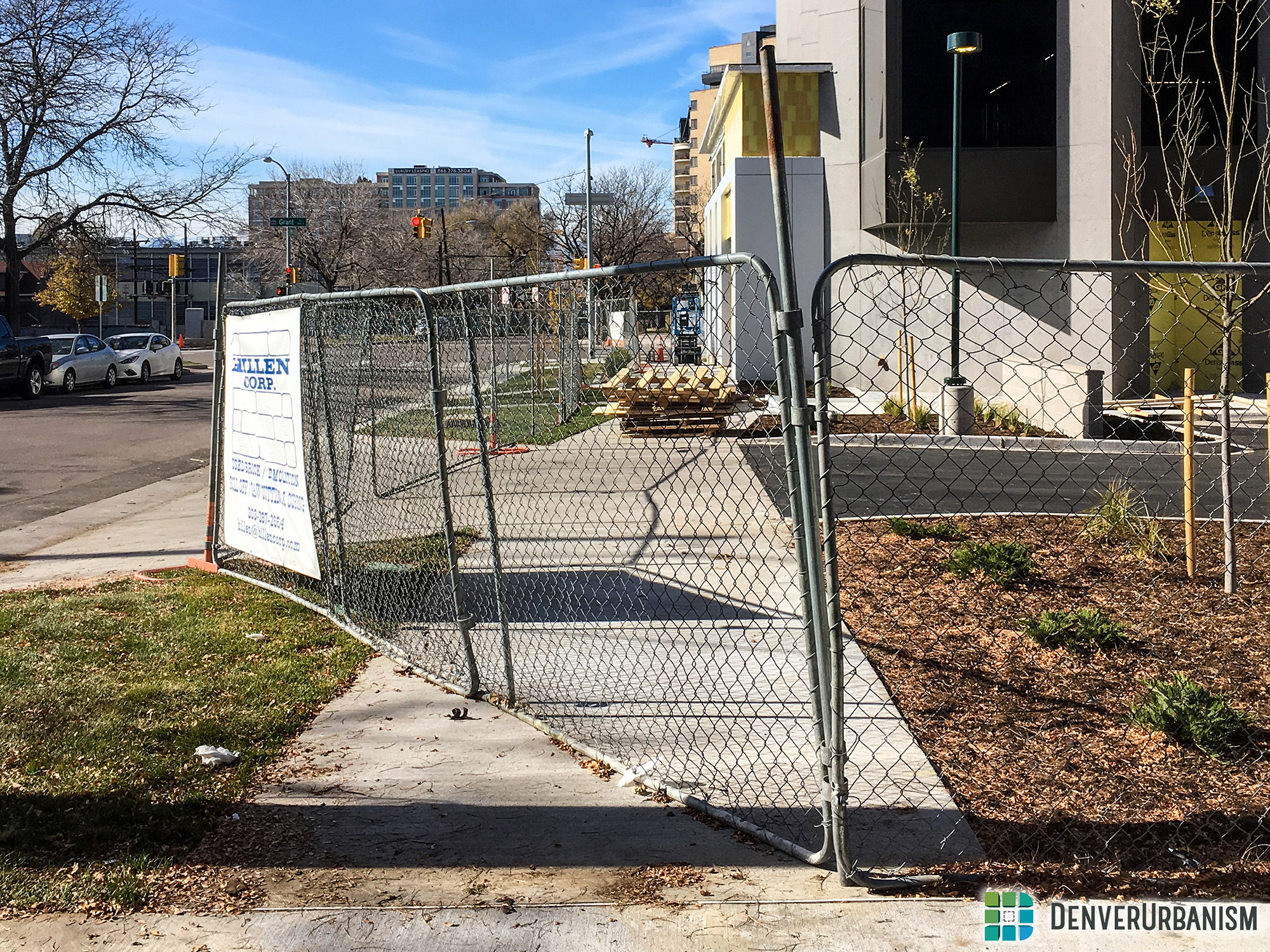 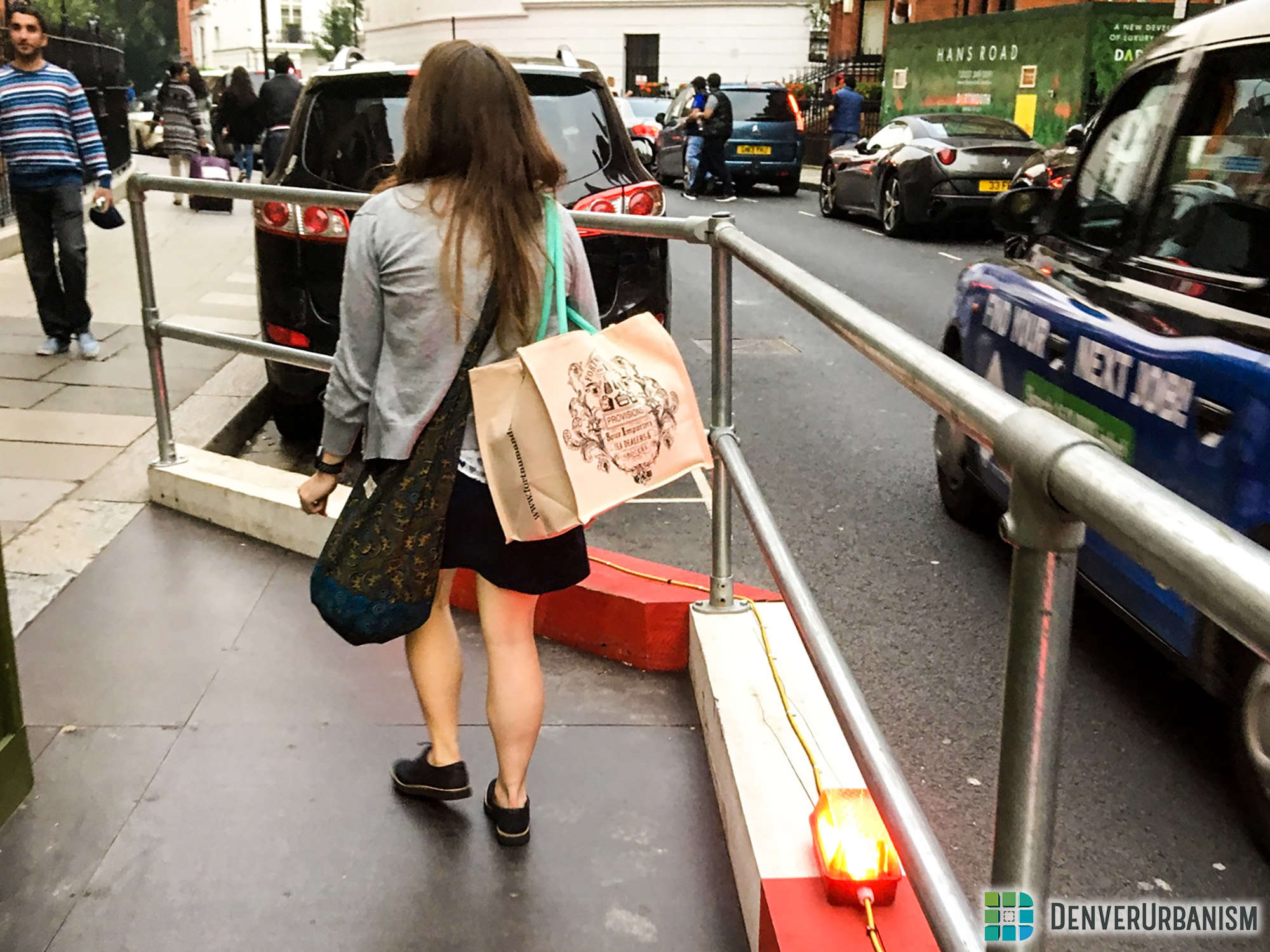 The intersection at 9th and Washington is an offset one-way street. It has been designed so that cars never have to slow down from the 30 MPH posted limit. This is a busy intersection for people on foot, but the speed limit, the long view corridor which widens the street, and the wide curves of the curbs are all designed to move cars with literally no thought of protecting pedestrians. Simply speed and volume. I never felt as unsafe walking on European streets carrying much more traffic as I felt on 9th Avenue, hearing cars whoosh by. Crossing intersections I wondered if cars would bother to stop, if they would even have time to stop if they tried. 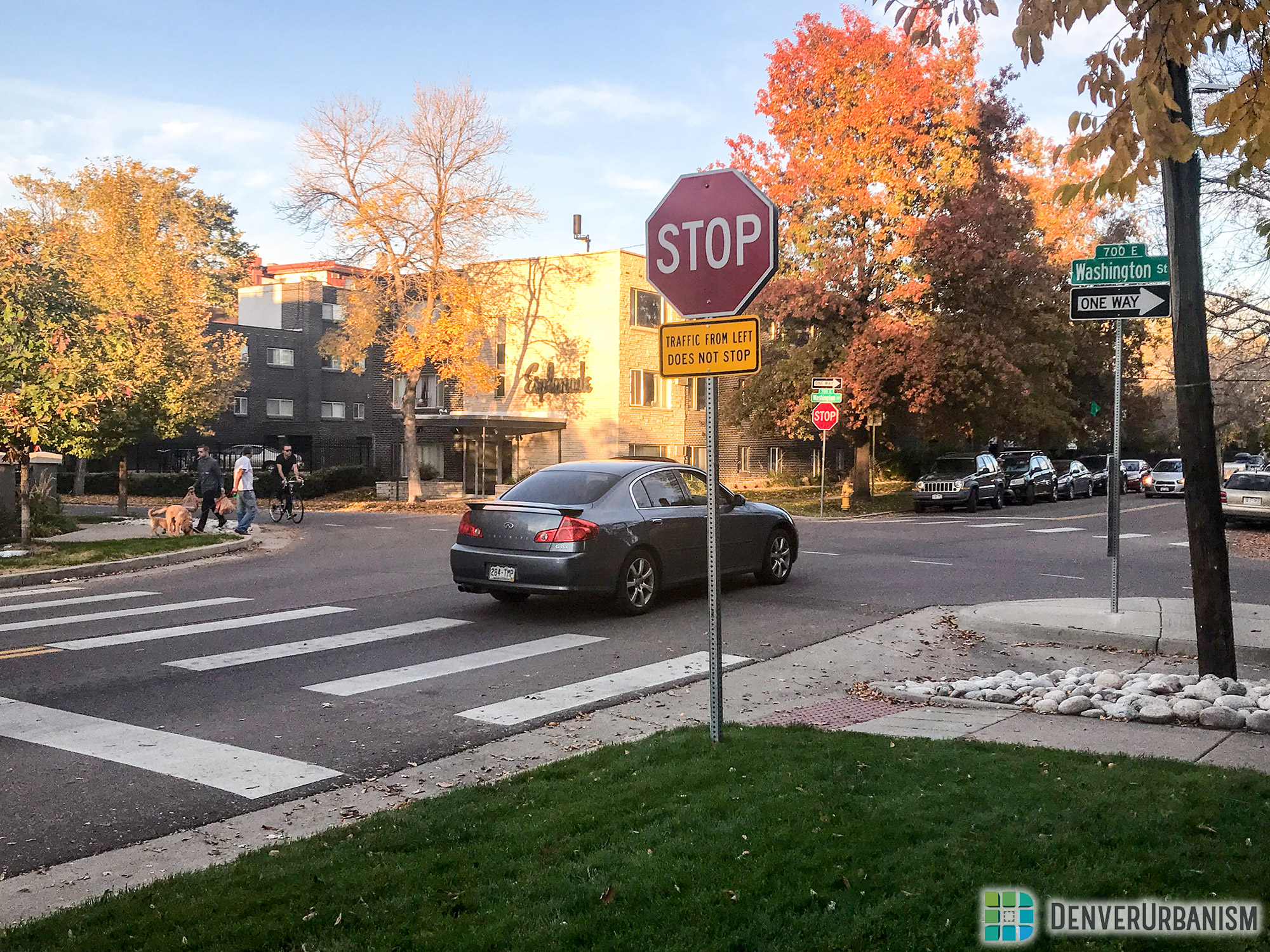 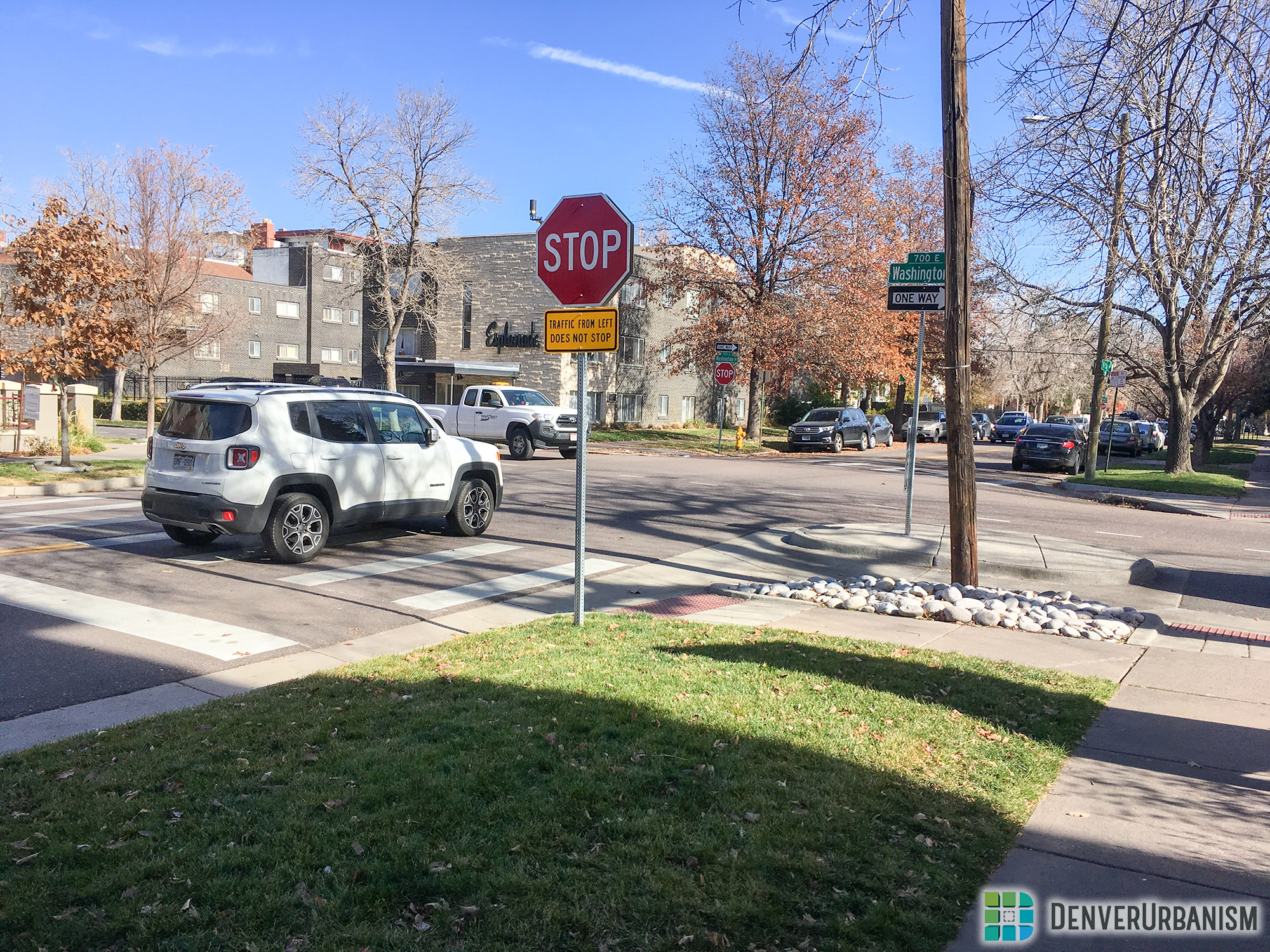 Pedestrians must cross Washington Street at 9th Avenue with no crosswalks or traffic controls to slow down speeding vehicles. Photos courtesy John Riecke.

Our city is built to accommodate cars, not people. It’s built to move and store cars, rather than allow people to live and move in safety. We even give away parking for free and insist that it be built into every new building, adding yet more cars to the streets. Our transit network is weak: infrequent and unpleasant. Our sidewalks exist in some places, but crossing the street on foot is still a game of Frogger. If we want a livable city, a walkable city, an economically strong city filled with happy people, we need to make the city work for people instead of their cars. We need to look to our peers. “Denver isn’t even New York or Chicago, much less London or Paris,” you might think. But we’ll never finish the race if we never start it. We need to look to our peers, not to say “We could never do that here,” but to say “We now have a goal.” It’s time to start making Denver a city of pedestrians. 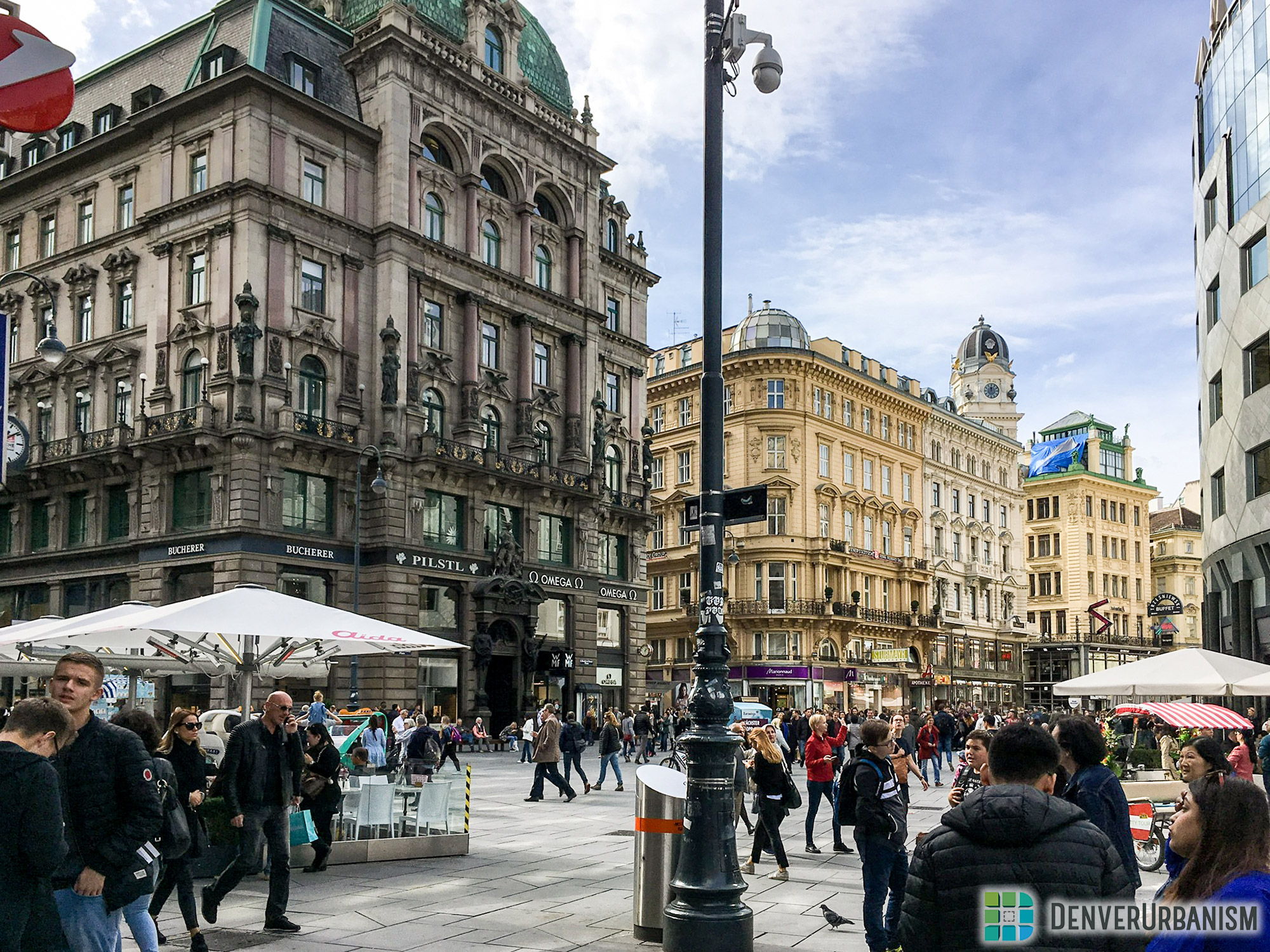 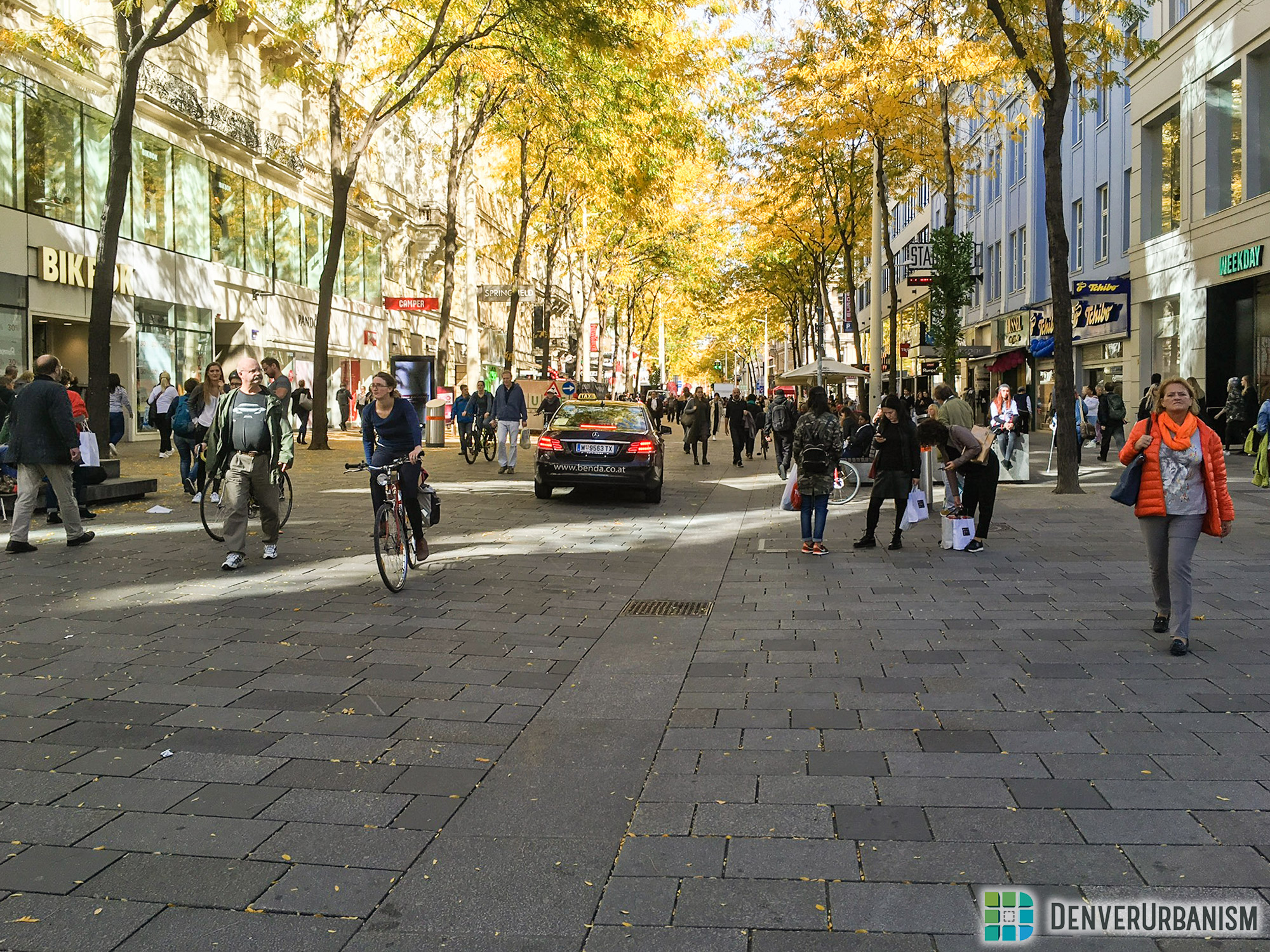 Streets where pedestrians are prioritized in Vienna, Austria. A goal for Denver? Photos courtesy John Riecke.

This article was originally published in October at WalkDenver.org.