Designing “Forgiving” Streets: There’s Nothing We Can Do. Or Is There?

Around 2:00 am on Sunday January 15th earlier this year, Christian McDonald walked onto Blake Street in downtown Denver, just west of 16th Street, and stood facing oncoming traffic. It’s impossible to know what Christian may have been thinking. The police officer who investigated the crash indicated that Christian had a history of mental illness that may have caused him to act erratically. Was he aware of the cars swerving around him? Did he understand the danger he was in? We’ll never know, because eventually someone driving a black BMW hit and killed Christian, who was 39 years old. The driver then sped off without stopping to check on him or call the police.

It’s tempting to conclude there is nothing we, as a community, could do to prevent another tragedy like this from happening in the future. Whether intentional or otherwise, people sometimes do risky things and suffer the consequences. In fact, human behavior is a contributing factor in the vast majority of fatal traffic crashes. We can wage educational campaigns admonishing people to be more cautious, but we can’t change the fundamental fact that humans are fallible. Sometimes people have health problems (e.g., suffer a stroke while driving, or become disoriented due to stress or mental illness), become distracted (e.g., the kids are fighting in the back seat), do dumb things (e.g., dash across an 8-lane road against a red light to catch a bus before it leaves), or simply make mistakes (e.g., forget to check for pedestrians in the crosswalk before turning left).

But if we start with the assumption that people will, inevitably, make mistakes, can we design a “forgiving” transportation system that prevents those mistakes from resulting in tragedy? Consider the major improvements to vehicle safety over the years. People who drive cars with airbags are no less likely to crash than people driving cars without airbags. But airbags significantly reduce the chances a crash will be fatal. So what’s the equivalent of airbags for pedestrians?

Research tells us vehicle speed plays a critical role in the severity of crashes. Drivers traveling at higher speeds are less likely to see someone walking or biking, are less likely to yield, have less time to stop, and if a crash occurs, it is much more likely to be fatal. The Denver Police don’t know exactly how fast the driver who hit Christian was going, but the evidence suggests it was much faster than the posted speed limit of 25 miles per hour. If the driver had been going slower, perhaps he or she would have been able to avoid hitting Christian, or perhaps the crash might have injured Christian, but not killed him.

Research also tells us the biggest determinant of traffic speed is the design of the roadway. While the speed limit on Blake Street is 25 miles per hour, it’s a wide road with three lanes of one-way traffic, designed to speed cars out of downtown as quickly as possible. Even during rush hour, traffic often hurtles down the street well above the speed limit. This design is dangerously inconsistent with the setting in the heart of downtown Denver, mere blocks away from the biggest transit hub in the entire state of Colorado, and intersecting the 16th Street Mall where an average of 21,000 pedestrians walk every day.

Fortunately, we know how to design streets to support slower speeds. For one thing, narrower, two-way streets encourage slower traffic. Compare Blake to Wazee, just one street over. Instead of three one-way lanes, Wazee has just two lanes, going in opposite directions, and as a result traffic is much calmer. Vertical speed control elements—such as raised crosswalks—are even more effective at enforcing safe speeds. In very pedestrian-oriented areas, such as where Blake crosses the 16th Street Mall, the entire intersection could be raised. See the example from Florida pictured below. 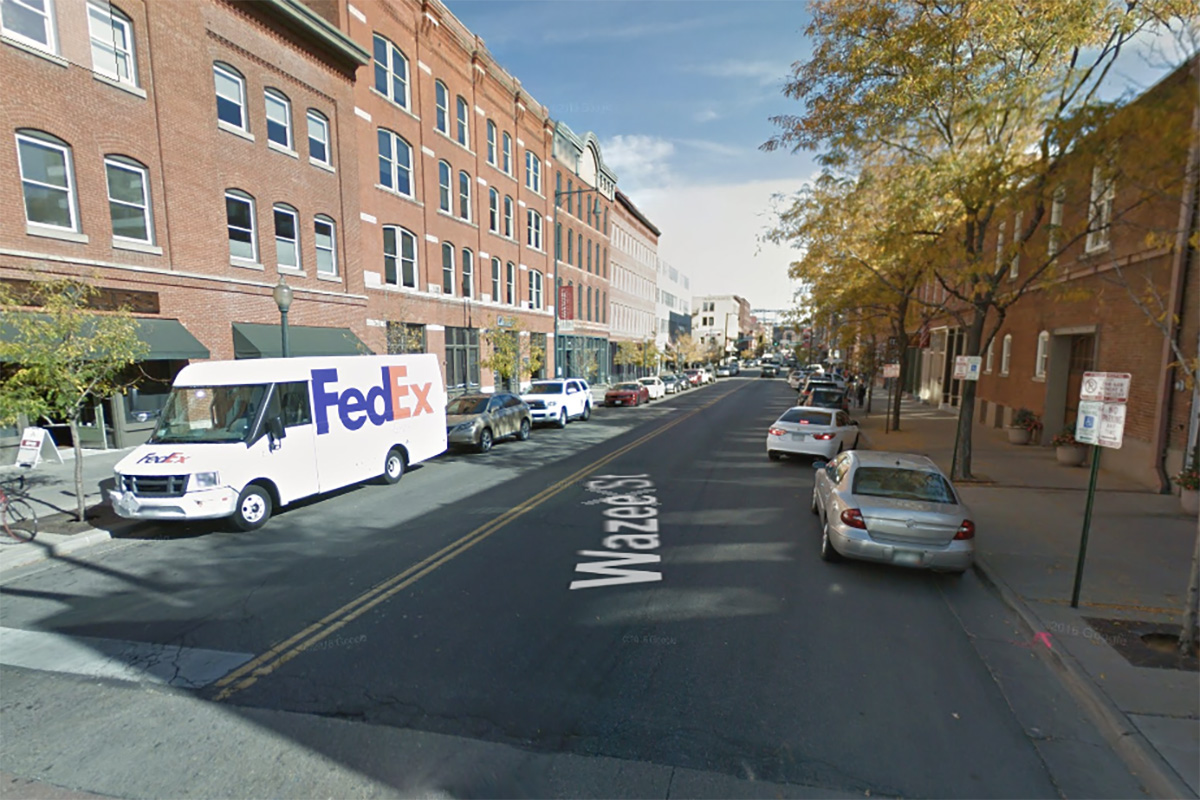 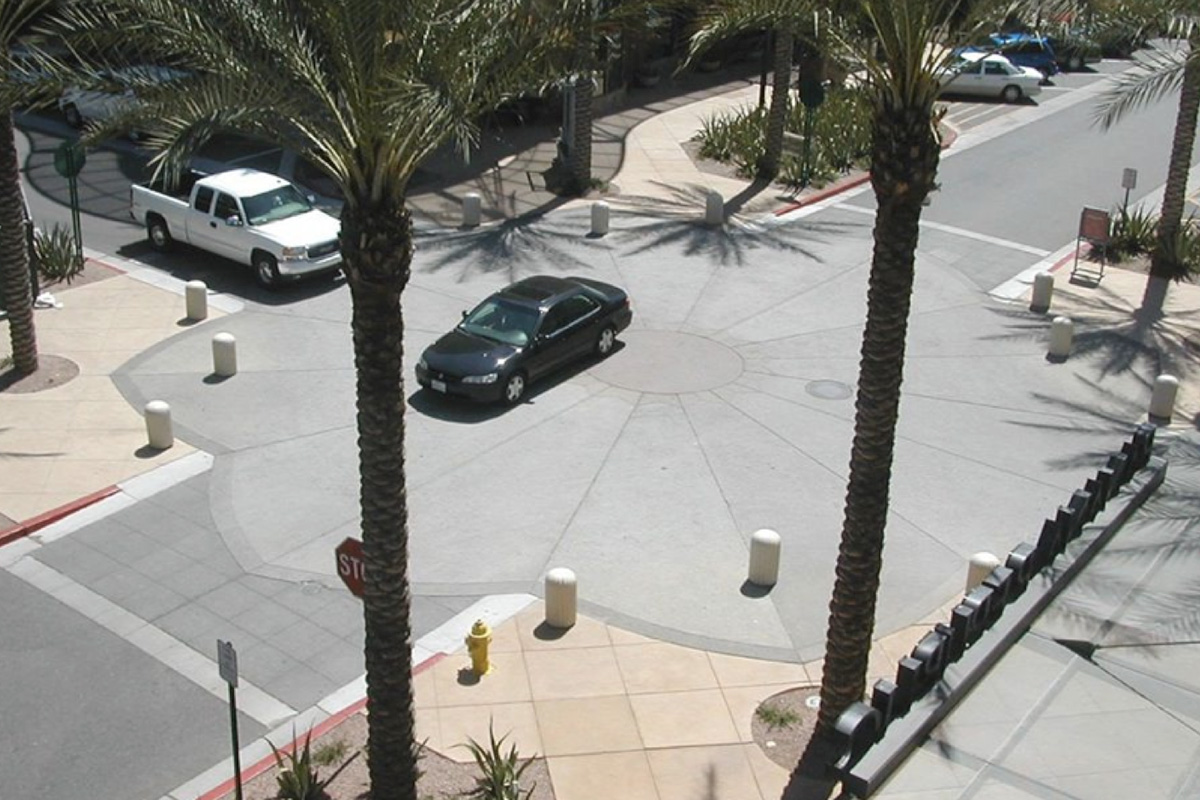 These are exactly the types of street designs the Denver Vision Zero Coalition is asking the City to test in different contexts (e.g., residential streets, mixed use streets, main streets), to determine what is most effective at promoting safe speeds here in Denver. Based on the outcomes of these tests, the Coalition is further asking the City to adopt formal guidelines for safe street designs, and to implement an annual program that funds safe speed projects throughout Denver.

Come rally with the Denver Vision Zero Coalition at the Love-In on February 14th, and show your support for redesigning our streets to be safer for everyone. If you can’t make the rally, sign the online-petition. Four people have died walking on Denver’s streets in 2017 already, but with your help, we can prevent future tragedies from happening. 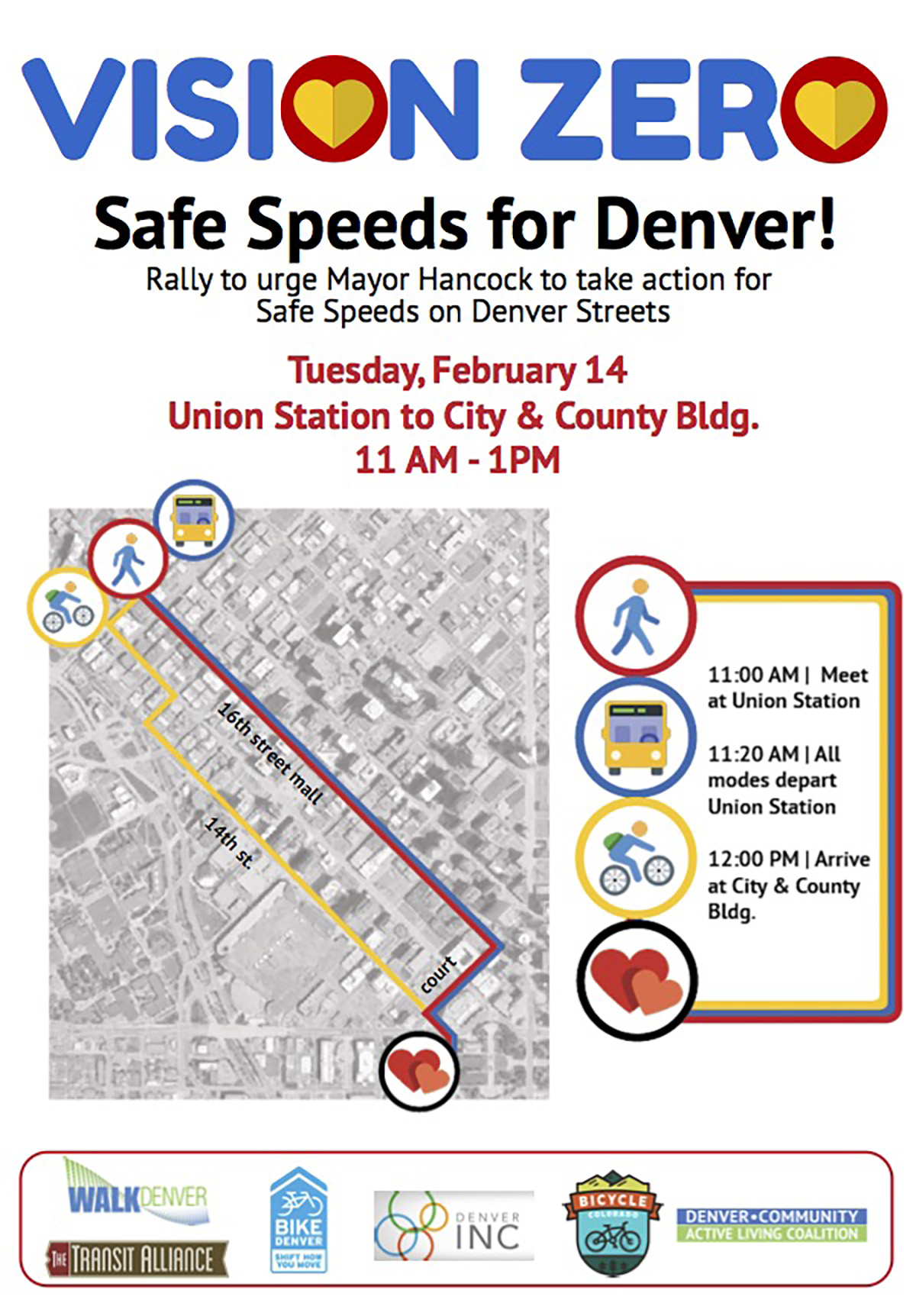