On this Google Earth aerial I’ve outlined the general extent of the Blake Street and Broadway improvements discussed in this post. Click to biggify. 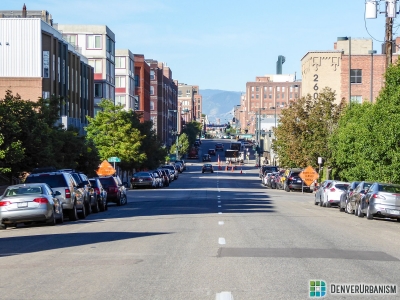 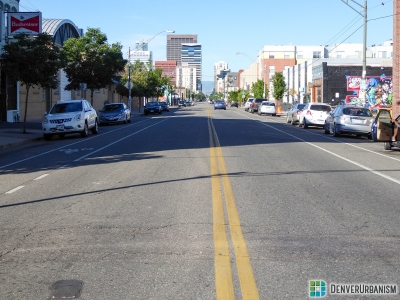 Broadway, between Blake and 29th Street, is a modern roadway that was constructed in the early 2000s as part of the removal of the old Broadway viaduct. It features wide (16′) pedestrian walkways on both sides of the street that are separated from the vehicle lanes by concrete walls and fencing for much of this stretch. These walkways will be converted to shared-use paths with the addition of a cycle track in each direction. 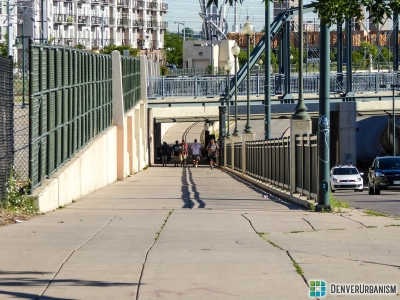 Pavement striping and signage will delineate the pedestrian and bicycle zones within each path. At 29th Street, the cycle tracks will connect to the new cycle tracks planned as part of the big Brighton Boulevard Reconstruction project that will start construction very soon.

If some of you are thinking “With Blake being converted to two-way, there’s no point in keeping Walnut as a one-way street since Walnut and Blake operate as a one-way couplet”—you’d be right! The conversion of Walnut northeast of Broadway to two-way with bike lanes will likely happen in the future. According to the Northeast Downtown Neighborhoods Plan (2011), Walnut is identified as a street with good potential for conversion to two-way. From the plan: “Evaluate conversion of Walnut contingent on significant redevelopment along this street that eliminates most of the existing loading docks. This recommendation is long-term and reliant on land use changes.” The city will soon begin a study of Walnut to evaluate the situation given the intense redevelopment activity in the area.

The Blake Street two-way conversion/bike lanes and Broadway cycle track project represents another important step in more fairly balancing the use of the public right-of-way in the Downtown area between different transportation modes. Work on the Blake Street project is scheduled for late August 2016. Thank you Denver Public Works… keep up the good work!

While this may be the end of our current series on RiNo, this won’t be the last of our coverage of new infrastructure in the area. We’ll continue to spotlight these and other projects as they move forward. Nor is list of projects we covered in this series exhaustive either. Additional projects such as new sidewalks around the 38th and Blake station, the rebuilding of the Blake Street bridge over 38th Street and other small but critical improvements here and there are helping elevate River North’s outdated industrial-era streets into a walkable/bikeable public realm suitable for an urban, transit-oriented, mixed-use district.