The long-awaited reconstruction of RTD’s Civic Center Station started this morning with a “pillar-toppling” ceremony to begin the demolition of the current station. Check out our video of the event:

Per RTD, the new Civic Center Station will feature:

Here are a few renderings, courtesy of RTD, Mortenson Construction, Perkins Eastman, and SEH. You’ll note minor variations in the station design among these renderings. I’m not sure which is the most recent, but these will give you a good general idea of what the new station will look like.

Bird’s-eye view towards the State Capitol: 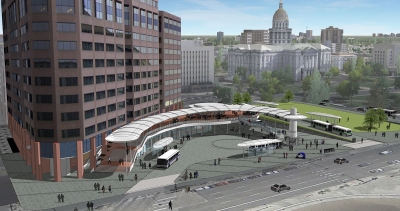 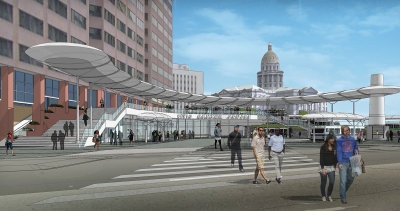 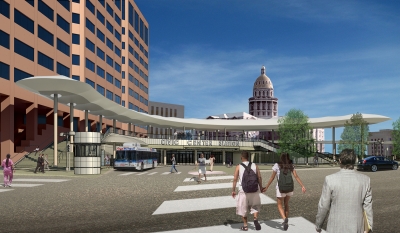 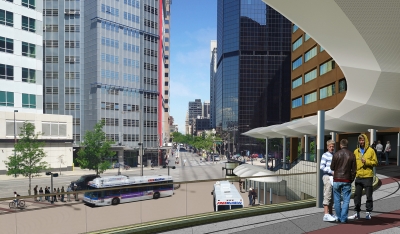 In addition to the station’s revitalization, the City, RTD, and the Downtown Denver Partnership recently completed the Civic Center Transit District Plan. You can visit the plan’s page here where you can also download a PDF copy of the plan document.

This is an image I extracted from the plan document that shows another view of the station design concept: 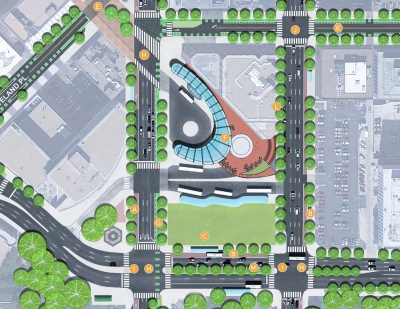 An interesting aspect of the new Civic Center Station design is the bus loading zone between Broadway and Lincoln north of Colfax. It appears this design feature will allow southbound buses from Broadway to be able to turn left, load/unload passengers, and then turn north onto Lincoln without having to make left turns onto and from Colfax. Traffic turning movements onto Colfax from Broadway and onto Lincoln from Colfax represent major conflict areas with pedestrians in the crosswalk, so this design feature is a welcome improvement.

Finally, you’ll note the grassy area between Colfax and this new bus loading zone. What could go in that area in both the short-term and long-term is discussed in the Civic Center Transit District Plan linked to above. Please do check it out.

The reconstruction of Denver’s Civic Center Station is not only a big win for RTD but for all of Downtown Denver. It will greatly improve the pedestrian experience in the Upper Downtown end of the 16th Street Mall and the Civic Center Park area, and will provide a fresh, modern counterpart to the new transit facilities at Union Station.

We will track this project through to completion, estimated at 15-18 months.