Blast from the Past: One Lincoln Park

The very first DenverInfill Blog post was on July 5, 2005 and was about a rumored new tower called “One Lincoln Park” planned for somewhere on Lincoln Street between 16th and 20th avenues. Of course, the site ended up being the oddly shaped block bounded by Lincoln, 20th Street, 20th Avenue, and Welton, where the downtown and metro grids collide. One Lincoln Park is a 32-story, 380-foot tall condominium tower.

Here’s a photo I took on June 16, 2007 from up high in a nearby office tower of One Lincoln Park under construction: 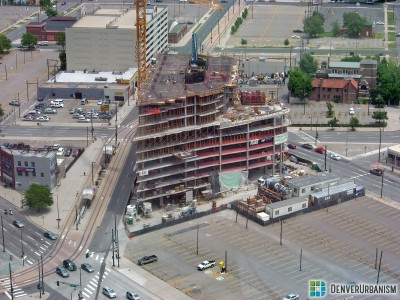 One Lincoln Park was completed in late 2008.